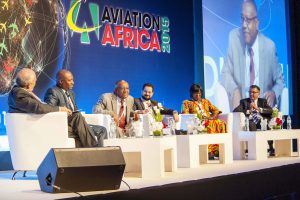 Rwanda’s Ministry of Infrastructure, Rwanda Civil Aviation Authority
and RwandAir will officially support the Aviation Africa 2017
conference to take place on 22 to 23 February 2017 in Kigali, Rwanda.
According to Alison Weller of Access Group, acting as spokesperson,
the event is a two-day conference and exhibition focused on all
aspects of the aviation industry including commercial, military,
business, infrastructure, regulatory and safety.

Weller said the event is supported by the Rwandan government,
including the Ministry of Infrastructure, Rwanda Civil Aviation
Authority and RwandAir.
It is reported that Rwanda is fully committed to supporting Aviation
Africa 2017 and ensuring that aviation related events grow in Rwanda.
Aerospace and aviation are reported to be extremely important
sectors for Rwanda.The country is investing heavily in the sector
through airline, airport infrastructure and its people. “We are
confident that Aviation Africa will attract large numbers of
participants and visitors through our invitation programme and look
forward to welcoming the global aviation industry to Rwanda,” Weller
said.

Rwanda has a uniquely open visa policy for all African and
international visitors, operating a visa-on-arrival service. It has a
strategic geographical location, a large investment in tourism and
hospitality and high levels of security plus an aviation-friendly
environment.

According to IATA’s latest forecast Rwanda is one of the 10 African
countries who’s aviation market is expected to grow by 7-8 per cent
each year on average over the next 20 years, doubling in size each
decade.

Organisers of the event have announced that the independent Flight
Operations Services Operator Neus will be the host sponsor. Nexus,
which launched in 2010 and is based in Jeddah, Saudi Arabia and has
opened a regional office in Rwanda and has already identified the
opportunities the region can offer.
Nexus is also expected to participate in the exhibition along
with companies who have already signed up early including Mitsubishi
Aircraft Corporation, Skyplan, EgyptAir Training Centre, Ethiopian
Airlines MRO, Ethiopian Aviation Academy, Akagera Aviation and
Aerotask.

It is areported that flight safety and pilot evaluation are key
topics for African aviation at this time of rapid growth and pilot
shortages.

Civil Aviation and airport chiefs from Zimbabwe, Rwanda, and Ghana
will be looking at the infrastructure challenges that are holding
Africa’s growth back while IATA’s African leadership as well as CANSO
and Airports Council International ( ACI) have been invited to give
umbrella views on how the continent will press ahead over the next 20
years.

The event in 2017 is expected to host over 50 global exhibitors and
up to 500 delegates from across the African continent and the global
aerospace industry who are looking to grow their business in Africa.
The event takes place at the Radisson Blu Hotel and Convention Centre
in Kigali.