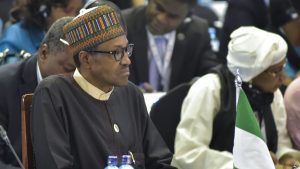 The spokesman for Nigerian President Muhammadu Buhari has rejected calls by the main opposition People’s Democratic Party (PDP) to resign.

The PDP said Buhari’s infective economic policies have plunged the country into the current economic crisis Nigerians face. The opposition party also said Buhari’s government incompetence on dependence on oil and failure to diversify the economy are to blame for the poor economic outlook.

The PDP said Buhari should resign immediately if he is unable to reverse what the party called the disastrous economic decline.

The National Bureau of Statistics officially confirmed that the country is in recession, adding that the Gross Domestic Product contracted by 2.06 percent.

In a statement released to the media on Wednesday, Deji Adeyanju, the PDP’s director of new media, said it appears that President Buhari is incapable of resolving the country’s economic problems.

“Nothing better showcases the absolute ineptitude and incompetence of the Muhammadu Buhari administration than the GDP, inflation and unemployment figures released by the Nigerian Bureau of Statistics today,” said Adeyanju. “… The result of these indices is that Nigeria is in its worst economic state for 29 years — dating back to 1987 when the nation had to take harsh steps to recover from President Buhari’s policies of 1984-85.”

But in an interview with VOA, presidential spokesman Shehu Garba said Buhari is not to blame for the economic crisis. He predicted that measures the government has implemented would soon reverse the country’s economic outlook.

“The economy had been racked over the years by massive corruption and lack of productivity,” said Shehu. “The collapse of the oil prices came hard on the Nigerian economy, and the ongoing sabotage of oil installations by the militants in the [Niger] Delta, which has cut oil output by nearly 60 percent. So, all of these coming together, obviously have their implications [on] the overall performance of the economy.”

Shehu said the president’s reaction is that “there are positive signals coming also from the report. Because the key element of the policy of the administration — meaning agriculture, mining and foreign investment — all of these show an indication of growth, which indicates that the economy is responding to the policy direction and priorities of [the] President Muhammadu Buhari administration.”

Critics say since coming to power nearly two years ago, Buhari has yet to clearly articulate plans to jump-start the economy despite repeated promises. They also say it appears he has no clue to resolve the myriad of economic challenges that Nigeria faces in spite of pleas that he needs more time to turn things around. Critics also argue that if Buhari has expedited plans to diversify the economy instead of the over dependence on oil, the country would be better off.

Presidential spokesman Shehu predicted that before the year is over the economy would be out of recession, based on what he said has been the administration’s well-laid out plans to combat economic factors which he said created the present conditions.

“Any effort to diversify the economy would have to take time,” said Shehu. “This country, for as long as anybody can remember, has been relying on earnings from petrol, even with foreign earnings. …Nobody saved for the rainy day. Nobody planned over these years to diversify.”

Moving away from agriculture

Ironically, Shehu added it is the “Muhammadu Buhari administration that is saying to the country ‘we have to move away to agriculture’. And we have already set targets and at the end of the first term of this administration, this country would not be importing rice, we would not be importing wheat and hopefully, sugar. … There is a green revolution going on, so soon agriculture would be the main stay of the economy with or without oil.”

“President Buhari promised good things,” Shehu added, “but he didn’t promise Nigerians that the sun will rise from the west or that he can use his palm to cover the sun. No. He is not a magician. It would take time to restore, to bring out Nigeria from the depth from the cesspool of corruption that it has been sank by years of PDP misrule.”