“The timing of this is fascinating,” U.S. President Barack Obama told a group of about 750 guests Friday in the Grand Foyer of the White House, who were gathered to celebrate the opening of the National Museum of African American History and Culture.

The crowd, many of whom were African American, laughed and applauded at the understatement.

The city of Charlotte, North Carolina, has been rocked by three nights of protests following the police shooting of a black man Tuesday. Also this week, a court in Tulsa County, Oklahoma, charged a white police officer with manslaughter after she fatally shot an unarmed black man last week.

Continuing his remarks, Obama said, “In so many ways, it is the best of times. But in many ways, these are also troubled times. History doesn’t always move in a straight line. And without vigilance, we can go backward as well as forward.” 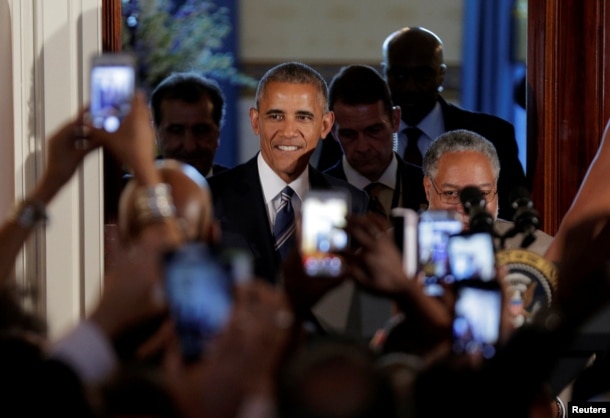 U.S. President Barack Obama arrives for a reception marking the opening of the Smithsonian’s National Museum of African American History and Culture at the White House in Washington, Sept. 23, 2016.

The new museum, first proposed by a group of black Civil War veterans in 1915, officially opens Saturday in a central location on Washington’s National Mall — among war memorials and cultural institutions, with a clear sight line to the U.S. Capitol.

“My hope is that, as people are seeing what’s happened in Tulsa or Charlotte on television, and perhaps are less familiar with not only the history of the African-American experience, but also how recent some of these challenges have been, upon visiting the museum may step back and say, ‘I understand. I sympathize. I empathize. I see why folks might feel angry and I want to be part of the solution, as opposed to resisting change,’ ” the president said.

Obama concluded his remarks to a crowd full of African-American luminaries that included music producer Quincy Jones, basketball star Kobe Bryant and Harvard professor Henry Louis Gates: “When I imagine children — white, black, Latino, Native American — wandering through that museum … my hope is that this complicated, difficult, sometimes harrowing but, I believe, ultimately triumphant story, will help us talk to each other … and recognize the common humanity that makes America what it is.” 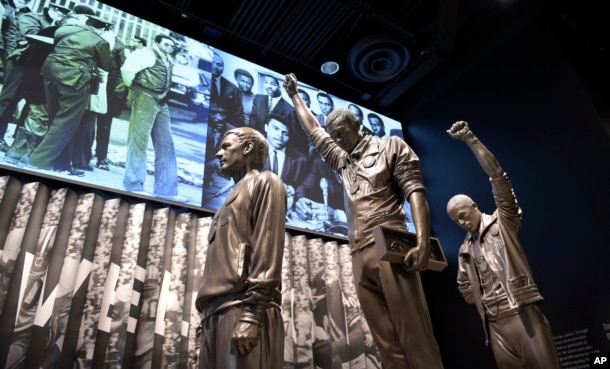 FILE – A statue of the 1968 Olympics Black Power salute is on display at the National Museum of African American History and Culture in Washington, Sept. 14, 2016.

Friday’s White House reception — attended by many of the museum’s contributors — was the kickoff event in a weekend of festivities, as the museum opens its doors and throws an outdoor festival as well, to accommodate overflow crowds.

Nicholas Lorenz has been anticipating the opening for a long time.

“I heard about the museum before they broke ground, and we have been following their Facebook page for two or three years,” Lorenz said of himself and his wife, both educators based in Miami, Florida. “We got tickets through the [museum] website the morning they were made available. We got 24 tickets of the 30,000 they made available that day. Apparently, they all sold out within 45 minutes, so we feel lucky!”

The Lorenzes are a mixed-race couple: he is white, and his wife, Liz, is biracial. The distinction is “irrelevant” now, they say, but it would have been illegal in the United States just a few decades ago. To children of today, that part of history may seem unthinkable.

Many of the stories in the museum are difficult to think about.

The lowest level of the museum deals with the arrival of Africans in North America — as slaves. Generations of blacks remained in bondage to white farmers for more than two centuries, and the racial divide that system created resonated throughout the Civil Rights Movement of the 1960s and the Black Lives Matter movement that has sprung up in response to conflicts between white police officers and black civilians today. 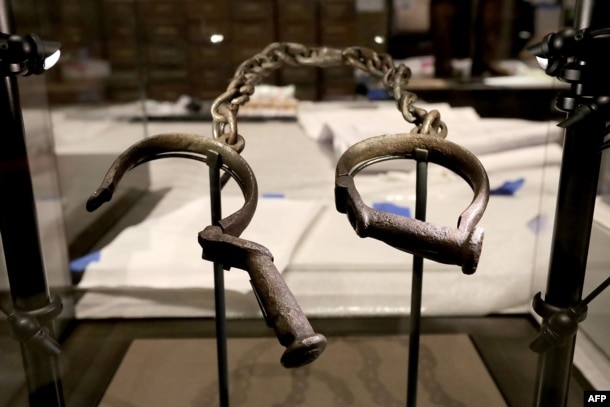 FILE – A pair of slave shackles are on display in the Slavery and Freedom Gallery in the Smithsonian’s National Museum of African American History and Culture during the press preview on the National Mall in Washington, D.C., Sept. 14, 2016.

The museum’s founding director, Lonnie Bunch, has been on the job since 2005 and had a part in deciding the museum’s look: dark bronze-colored layers of metal, in contrast to the white Greek Revival structures that dominate the National Mall.

Bunch has said the building should reflect the troubled past the museum describes.

“I wanted a darker building,” he told the New Yorker magazine in April. “There’s always been a dark presence in America that people undervalue, neglect, overlook. I wanted this building to say that.”

The museum’s very location is a reminder of the dark past. While the National Mall, home to more than half of Washington’s Smithsonian museums, is known as “America’s front yard,” it was also once home to slave pens, where human beings of African origin were held like cattle to be bought and sold.

Due to height limits designed to preserve views of all the monuments, 60 percent of the museum is underground.

Visitors start in the basement, with the ugly history of the slavery era. As they advance to higher floors, the story grows more uplifting, although still fraught with conflict. 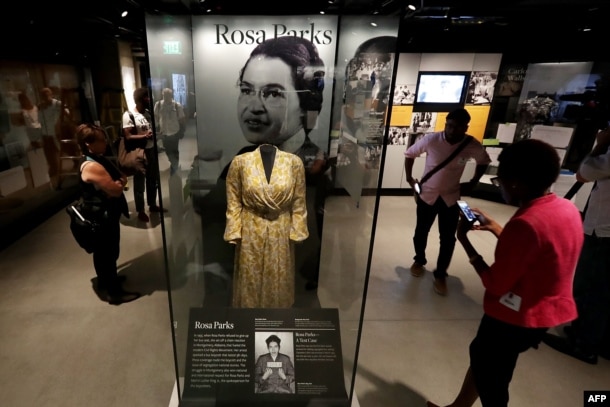 FILE – Civil Rights pioneer Rosa Parks’ dress is on display in the concourse galleries at the Smithsonian’s National Museum of African American History and Culture on the National Mall Sept. 14, 2016 in Washington, D.C.

The narrative of upward movement is reflected in the architecture designed by British-Ghanaian architect David Adjaye. The building appears to rise from the ground, with exterior panels opening upward and outward toward the blue sky.

Despite slavery being outlawed in 1864, it took a century for blacks to achieve full legal rights with whites in the Civil Rights Act of 1964. The Supreme Court decision removing barriers to interracial marriage, the issue that the Lorenzes might have faced, did not happen until 1967.

The top level of the museum, where light pours in and visitors can see a sweeping view of the Mall and the monuments, is a showcase for African-American art.

The Smithsonian Institute has other museums dedicated to American art and African art, but here, the mingled cultures are allowed to shine together.

The museum also features thousands of artifacts from famous African Americans and everyday citizens. There are so many pieces that the museum plans to exhibit them on a rotating basis.

Media mogul Oprah Winfrey, ranked by Forbes magazine as No. 21 of the world’s richest women, is a major donor to the museum, contributing not only $20 million from her charitable foundation, but also a pair of slave shackles from the mid-1800s, donated from her private collection of artifacts.

Ironically, the collection also includes a pair of handcuffs used in the arrest of Harvard scholar Henry Louis Gates, who was arrested outside his own home in Cambridge, Massachusetts, in 2009 by an officer mistakenly assuming Gates was a burglar. 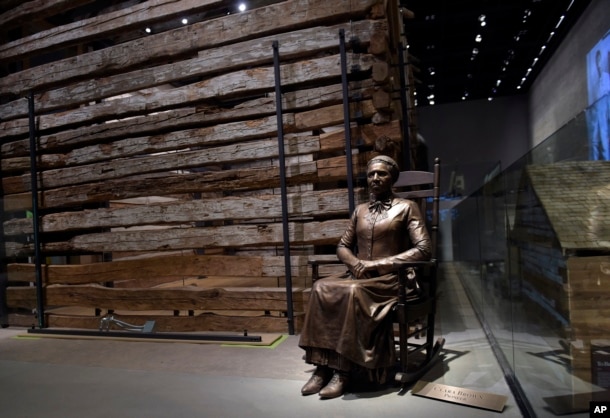 FILE – A statue of pioneer Clara Brown, who was born a slave in Virginia around 1800, is on display at the National Museum of African American History and Culture in Washington, Sept. 14, 2016.

Other artifacts in the collection include: 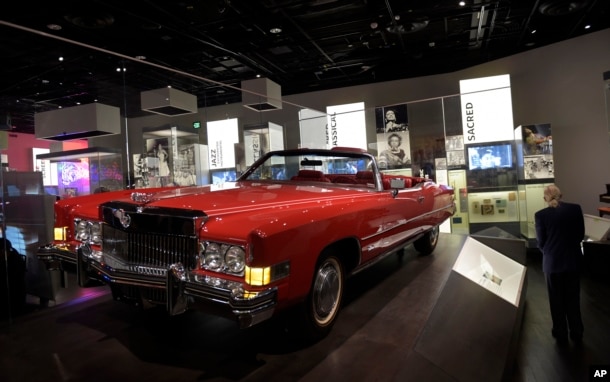 FILE – Chuck Berry’s 1973 Cadillac Eldorado is on display at the National Museum of African American History and Culture in Washington, Sept. 14, 2016.

While the story the museum tells is often difficult and sometimes painful, Obama and museum founding director Bunch say the story of black Americans is relevant to all Americans.

Museum-goer Lorenz believes that, as well.

He says understanding the black experience is crucial to understanding what the United States is, even if some of the lessons it teaches are painful for whites to consider.

“This is an essential and foundational aspect of our shared culture and history,” he said. “We welcome the opportunity to engage with all of it — the good and the bad. White guilt and white fragility have kept us from knowing our history for too long as it is.”

More importantly, Lorenz says, ignoring history bars the way to progress. “Naming our history and fully facing its implications is the only way forward.”