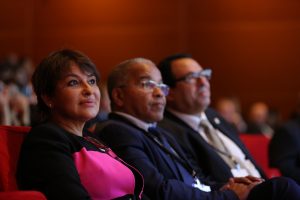 New York, September 19, 2016 – Hakima El Haité, COP22 Special Envoy and Morocco’s High-Level ClimateChampion delivered a keynote address at the opening event of Climate Week NYC on September 19 in New York Cityduring which she called on world leaders to move from their commitments under the Paris Agreement to robustclimate action at the 22nd Conference of Parties to the United Nations Framework Convention on Climate Change(COP22) scheduled in Marrakech, November 7 to 18, 2016.  Climate Week NYC features over 100 affiliated events andserves as a platform for convening and promoting climate change and clean energy initiatives on the margins of theUnited Nations General Assembly week in New York.

The opening day of Climate Week NYC was dedicated to unleashing the next wave of climate and clean energyinnovation, not just in the United States but across North America and around the world.  A high-level group ofclimate leaders from the private sector and government took part in the activity.  Keynote addresses and groupconversations included participation by Dr. Ernest Moniz, US Secretary of Energy; Rachel Kyte, CEO of SustainableEnergy for All and Special Representative of the UN Secretary General; Jonathan Pershing, US Special Envoy forClimate Change; Philippe Couillard, Premier of Quebec, Rachel Notely, Premier of Alberta; Eric Rondolat, CEO, PhilipsLighting and Andrew Pleper, Environmental, Social and Governance Executive, Bank of America.  The days eventcame to a close with the showing of two documentary film trailers distributed by National Geographic, “Before theFlood”, which is directed by Oscar-winning director Fisher Stevens and produced by Leonardo DiCaprio, and “Years of Living Dangerously” a documentary television series focusing on global warming by executive producers James Cameron and Arnold Schwarzenegger. 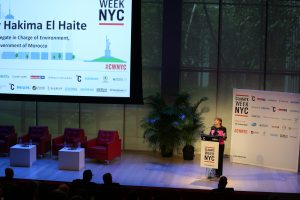 During her closing keynote address, Minister El Haité underscored the importance of addressing the global issue ofclimate refugees on the backdrop of the first ever United Nations Summit for Refugees and Migrants held today in New York including the participation of the Moroccan Minister of Migration Anis Birou.  According to Minister ElHaité, “between 2011-2014, 83 million climate refugees worldwide have taken the road towards exile. “ She added, “we human beings can still be generous and find solutions for the most vulnerable to climate change.”  Minister ElHaité also took the opportunity to call world leaders and climate change stakeholders to COP22 this November.  “Thecommitment from Paris is behind us and the action in Marrakech is ahead of us.”