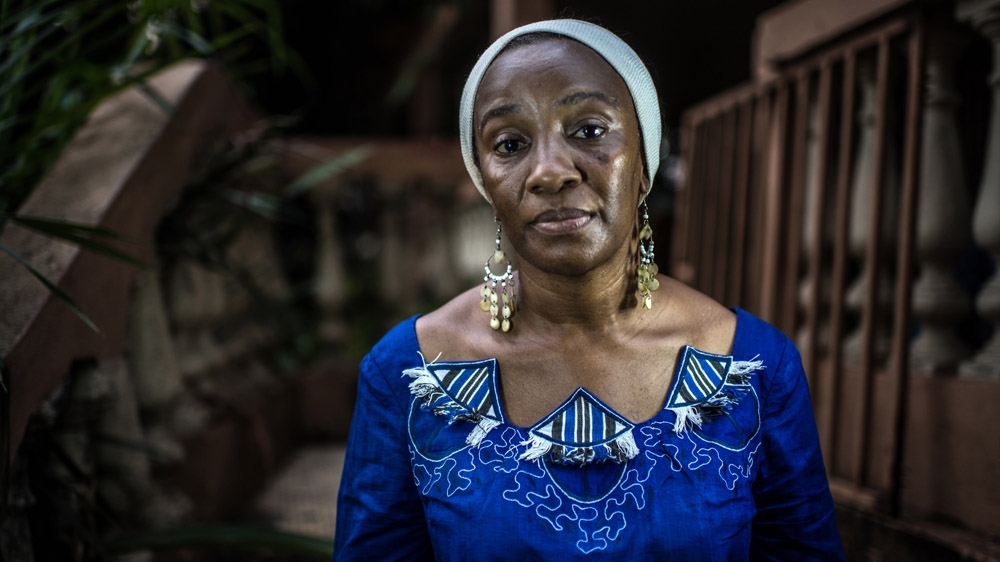 Conakry, Guinea – Asmaou Diallo was watching television in her home on the outskirts of Guinea’s capital, Conakry, when the shooting began on the morning of September 28, 2009. Her heart sank. Her oldest son, 33-year-old Ali, had left home to join a pro-democracy rally that day, and she had feared the event could turn violent.

She dialled his number but got no answer. She called again repeatedly until, eventually, someone picked up. But the voice on the other end was not her son’s.

“That’s when I knew, deep down, that he was dead,” she tells Al Jazeera from her living room. “Ali was never without his phone.”

Ali was one of the 156 people killed that morning in the West African republic after soldiers stormed the national stadium where an anti-government rally was being held. Seven years later, with an unprecedented trial scheduled for 2017, his mother is leading the fight for justice.

It was several days later when Ali’s body was found, among dozens of other shrouded corpses laid out in front of a mosque. It was so badly disfigured that his uncle walked past it three times before recognising him. The government had initially barred access to the morgues in an apparent attempt to conceal the extent of the slaughter, according to a Human Rights Watch report.

The killing at the stadium was methodical and merciless; soldiers guarded the exits to attack those trying to escape and electrocuted parts of the perimeter to prevent people from climbing over the walls. Many died of bullet wounds, while others were stabbed with knives or bayonets or battered to death with rifle butts. More than one hundred women were raped or subjected to other forms of sexual violence, according to the human rights group’s investigation.

One of the poorest and least developed nations in the world, Guinea has suffered years of corruption and political violence, with the stadium massacre, as it became known, being the latest in a long line of abuses stretching back to the years after the country’s independence in 1958.

Diallo remembers being taken on a class outing when she was 10 years old – to watch a hanging.

“I closed my eyes, but the teacher said we had to watch,” the 57-year-old recalls. Under the rule of Guinea’s first leader, Ahmed Sekou Toure, this was not uncommon. His 26-year presidency was characterised by the ruthless suppression of dissent, both real and perceived.

Political rivals and dissidents were arrested by the thousands to face kangaroo military courts which frequently executed their defendants within hours of hearing a case. Others ended up imprisoned in military barracks across the country, including the much-feared Camp Boiro, where some 5,000 Guineans were either put to death or died in detention. Diallo’s uncle was one of them.

By the time Toure died of heart problems in 1984, as many as 50,000 people had been killed or disappeared, and it is estimated that up to two million people had fled the country out of an original population of only six million. His successor, an army man named Lansana Conte was little better; those who crossed him were frequently executed or subjected to brutal forms of torture.

In 2008, a year before the massacre in the stadium, a young army Captain named Moussa “Dadis” Camara took over in a lightning coup just hours after Conteh’s death. When Dadis reneged on his initial promises to step down, angry Guineans arranged the protests.

In the weeks after her son‘s death, Diallo could think only of revenge. “Nothing was going to stop me. If I had met Dadis at that time I would have tried to strangle him,” she says. “But finally I understood that was not the solution. I needed justice to be done.”

Within days, Diallo and a small group of survivors set about collecting evidence of the massacre.

“The first task was to go out and identify the victims,” she explains. “We collected their information.”

If the government had found out what she was doing, she would have been arrested, or worse, she says. “When we heard from the victims what happened to them that day we were afraid. People told us to be careful. But I had this anger in me. I didn’t want to stop,” she continues.

Diallo helped form an association of the victims, their friends and families, known by its French acronym, AVIPA, and before long international human rights groups started coming to collect the evidence.

As international outrage grew, the government imploded amid recriminations over the violence. In December, a presidential aide shot Dadis in the head, injuring him, and the leader was evacuated to Morocco for medical treatment, paving the way for Guinea’s first free elections since independence. The people chose long-time opposition leader Alpha Conde, who styled himself as ‘Guinea‘s Mandela‘ and promised justice and reconciliation.

In January 2010, the Guinean judiciary launched an investigation. It would be the first of its kind, and put an end to decades of impunity in the security forces. Diallo has been pushing for justice ever since. As the public face of the victims’ association, she has appeared at conferences as far away as Europe to advocate for justice.

As well as supporting the victims of torture and helping victims of rape (many of whom were subsequently abandoned by their husbands) to get back on their feet, AVIPA has supported some 415 witnesses who have come forward to testify about the events of September 28.

It is not only the direct victims of the massacre who are seeking justice, says Nadine Barry, a French Guinean whose husband was tortured to death by the Sekou Toure regime in 1972.

Barry argues that Guinea suffers from a serious memory problem.

“Many young people here don’t know the truth about what happened under Sekou Toure,” she tells Al Jazeera, sitting on her balcony in the Kipe neighbourhood of Conakry. “Nobody speaks about it. Even the victims don’t speak about it. There is a kind of omerta among those responsible.”

Barry, a former United Nations worker who has written nine books on Guinea, sees the country’s failure to acknowledge and process its past as part of a cycle of violence that allows the security forces to believe that they can quite literally get away with murder. There are no memorials to mark the sites of atrocities, she says, and no sites of remembrance for the victims to visit.

“In Guinea, the past is like a festering wound. We need to open it up and let it all out. Otherwise, it will do damage from the inside,” she reflects.

INSIDE STORY: Can an election help Guinea’s democracy?

“What Guinea really needs is an actual reconciliation commission that will guarantee the rights of the victims to truth, justice and reparation, as well as the right to the non-repetition of these crimes,” says Mathilde Chiffert, from the International Federation for Human Rights (FIDH), which is supporting justice efforts in Conakry.

“To consolidate the basis of this young democracy and to avoid the repetition of such crimes, Guinea has not only to be clear about its history, but also to judge those who are responsible for the serious human rights violations – at the very least, those committed recently.”

It took Nadine Barry almost two decades to discover the truth about what happened to her husband, and another 20 years before she was able to exhume his body and bring it home to be reburied in a shady corner of her garden. A plaque above his grave now reads: “Here lies a victim of the dictatorship. Abdoulaye Barry. Pray for him, and for Guinea.”

Barry says the site has become something of a shrine for other widows who never found out where their own husbands were buried so come here to pray for them.

“They are jealous of what I have,” she explains, adding that closure is a luxury in Guinea.

‘Guinea will be able to breathe again’

The stadium massacre was little worse in scale than previous abuses committed by earlier governments, yet it was unique in its brazenness. It was recorded in hundreds of mobile phone videos and photographs and sent shockwaves through Guinea and abroad. The public sexual assault on women was particularly shocking to the country’s conservative Muslim-majority society.

Diallo was determined from the start that justice should not be outsourced to The Hague. It must be local and visible, even if that required a total overhaul of the country‘s creaking justice system; training judges, building a witness-protection programme, introducing a culture of judicial independence previously unheard of in Guinea.

Fear was a major obstacle. When Diallo tried to persuade victims to testify in front of the investigating judges, they asked her: “Why are you sending us to the butchers?”

“We have to fight,” she would reply. “It is for us Guineans to achieve justice.”

One lawyer representing the victims, who asked not to be named out of concerns for his safety, told Al Jazeera that the key players in the massacre – many of who remain in positions of influence in Guinea – are more than capable of intervening to affect its outcome through whatever means necessary.

Guinea‘s Minister for Citizenship and National Unity Gassama Diaby, acknowledges that putting high-profile figures on trial holds risks, but tells Al Jazeera that if done properly it could help to consolidate the country‘s young democracy.

The past seven years have seen progress towards justice for those killed in the stadium massacre. Fourteen people have been indicted over their role in the killings, among them generals and other powerful figures in the Dadis government, including the former president himself. If all goes to plan, the trial will begin next year, although logistical obstacles remain, including how to ensure Dadis returns from his exile in Burkina Faso to face justice.

“Life will never be like it was before,” says Diallo. “The pain is there just as bad. But it helps that I can see the possibility of justice. Everyone will watch and they will know what happened that day. Guinea will be able to breathe again.”

The post Massacre at a stadium: Guinea confronts its past appeared first on African Media Agency.