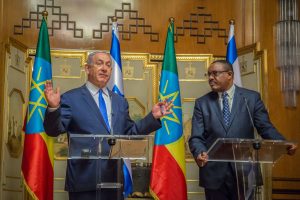 In early July, Israeli Prime Minister Benjamin Netanyahu made a historic four-nation trip to East Africa. The trip was a resounding success. Netanyahu’s aspirations of becoming a global statesman were boosted considerably by the willingness of African leaders to expand their trade and security linkages with Israel. Israel’s goal of becoming an observer state in the African Union (AU) also gained momentum, as the leaders of Ethiopia and Kenya endorsed Israel’s AU observer bid.

Despite these positive developments, Israel’s desire to become an AU observer state and expand its diplomatic involvement in Africa is fraught with many obstacles. Even though Israel was an observer state in the Organization of African Unity (OAU) until its dissolution in 2002, eleven African countries still do not recognize Israel’s right to exist. Israel’s support for Ugandan dictator Idi Amin, and alleged arms exports to Rwanda during the 1994 genocide have ensured that anti-Israel sentiments remain widespread amongst Africa’s political elites.

Visceral anti-Israel hostilities have even surfaced within African countries with close ties to Jerusalem. During Netanyahu’s visit to Kampala, Uganda’s President Yoweri Museveni repeatedly referred to Israel as “Palestine.” This deliberate mix-up was covered extensively in the international press and overshadowed the Netanyahu-Museveni bilateral summit.

The Palestinian Authority’s (PA) AU observer status also complicates Israel’s hopes of increasing its involvement in the African Union. Since 2013, PA President Mahmoud Abbas has called for an African boycott of Israeli goods and has urged AU members to support peace negotiations on Palestine’s terms. As Israel’s occupation of the Palestinian territories has been widely criticized in Africa, Abbas’s anti-Israel rhetoric has resonated strongly with many African leaders.

The ideological synergy between African leaders and Palestinian nationalists was strikingly revealed by Abbas’s praise for the AU’s solidarity with the Palestinian cause. Some African officials are concerned that Israel’s membership in the AU could polarize African leaders’ views on the Israel-Palestine conflict and weaken the AU’s harmony.

In addition to tensions over Palestine, two major AU member states, South Africa and Egypt will likely oppose Israel’s application for AU observer status. South Africa’s opposition to Israel becoming an AU observer can be explained by the governing African National Congress (ANC)’s belief that Israel’s treatment of the Palestinians is as egregious as apartheid. Israel’s extensive economic linkages to South Africa’s National Party government during the 1970s and 1980s has caused allegations of Israeli apartheid in Palestine to resonate strongly with the South African public.

Even though Israeli heads of state like Ehud Barak and Ehud Olmert reached out to the ANC to improve Jerusalem-Pretoria relations, the ANC has remained stridently critical of Israel. In June, the ANC condemned the opposition Democratic Alliance’s close relations with Israel, praised the 200,000 South Africans who campaigned for the Palestinian cause in the Western Cape region, and expressed solidarity with Palestine against “Israeli apartheid.” Many analysts have speculated that Netanyahu’s decision not to visit the AU’s headquarters in Addis Ababa was the result of a snub by the AU Commission’s South African head, Nkosanza Zuma’s.

Egypt’s opposition to Israeli observer status in the AU dates back to the Hosni Mubarak era. Even though large African states like Ethiopia, Nigeria and Kenya strongly supported Israel’s campaign to become an AU observer in 2003, Egyptstaunchly opposed Israel’s inclusion in the organization. Egyptian policymakers feared that Israel would use AU membership to back Ethiopia’s claims to the Nile River basin. As tensions between Egypt and Ethiopia have increased in recent months, Cairo’s position on Israel’s accession as an AU observer is unlikely to change.

Although Abdel Fattah el-Sisi’s 2013 coup strained the Egypt-AU relationship, Egypt’s AU membership was restored earlier this year. Egypt will host the Pan-African Parliament’s October 2016 session at Sharm al-Sheikh. During the October parliamentary session, Egypt is expected to reject Ethiopia’s colonial history-based claims to the Nile River basin. Israel’s strong relationships with both Ethiopia and Egypt could force Netanyahu to take a neutral stance out of strategic necessity. This non-committal approach to one of Africa’s most heated territorial disputes could cause Ethiopia to scale back its support for Israel’s AU observer status bid.

Even if Israel gains enough African support to neutralize potential opposition from South Africa and Egypt, Jerusalem’s role in Africa remains highly controversial. In recent months, Israel has attempted to act as a mediator between the United States and AU countries that have strained relations with Washington.

Israel has urged the United States to improve its relationship with Sudan, as Khartoum has distanced itself from Iran’s geopolitical clutches since late 2014. Even though Israeli officials have expressed concerns about Sudanese President Omar al-Bashir’s deplorable human rights record, Israeli policymakers have covertly urged European policymakers to ameliorate Sudan’s crippling $50 billion debt burden.

Sudan has responded negatively to Israel’s willingness to facilitate Khartoum’s normalization relations with the West. The Sudanese government has insisted that any improvement in Khartoum-Washington relations will occur through bilateral dialogues that exclude Israel. Some Sudanese policymakers are concerned that Israel’s leverage over US policy decisions could alter Washington’s approach to Sudan in a way that unduly benefits Netanyahu’s anti-Iran agenda.

Ethiopia’s contention that Israel is a constructive presence on the world stage has countered Sudan’s animosity towards Israeli diplomacy in Africa. Yet past grievances towards Israel continue to undercut the success of Israel’s soft power campaign in Africa. With notable exceptions like Robert Mugabe’s Zimbabwe, the perception that Israeli diplomats are acting at the behest of American interests has prevented anti-Western authoritarian leaders in Africa from embracing Israel as a constructive diplomatic presence in the AU.

Under Netanyahu’s leadership, Israel’s efforts to expand its diplomatic footprint in Africa have made striking progress. But historical legacies and anti-Israeli sentiments within many crucial AU member states could undercut Israel’s ambition of becoming an active observer within the African Union. It remains to be seen whether Israeli peacekeeping and humanitarian assistance initiatives increase Israel’s soft power enough for anti-Western African leaders to soften their opposition to a closer Israel-Africa relationship.

*HuffPost.Samuel Ramani is a DPhil candidate in International Relations at St. Antony’s College, University of Oxford. He is also a journalist who writes regularly for the Washington Post, The Diplomat and National Interest magazine. He can be followed on Twitter at samramani2 and on Facebook at Samuel Ramani.