President accuses EU observation mission of bias and insists that only the country’s top court can order a recount. 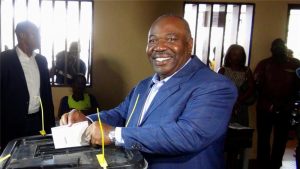 “I would also have liked them to have noted some anomalies in the fiefdom of Mr Ping,” says Bongo

Gabonese President Ali Bongo has denied EU observers’ calls for a recount of last week’s disputed presidential vote, saying it was a matter for the country’s top court to decide.

On Tuesday, an EU mission observing the August 27 polls reported a “clear anomaly” in voting in Haut-Ogooue province, Bongo’s heartland.

Official results gave turnout in the province at more than 99 percent, with 95 percent backing the incumbent against rival Jean Ping.

“What people should be asking me to do is apply the law. I cannot violate the law. As far as a recount is concerned … that’s done at the level of the Constitutional Court.”

Bongo, whose family has ruled Gabon for nearly half a century, won a second term by a slender margin of fewer than 6,000 votes over Ping.

The opposition leader, however, says that the election was a sham and has demanded a recount – a call echoed by Manuel Valls, prime minister of Gabon’s former colonial power, France.

Post-election clashes between his supporters and security forces have resulted in the deaths of between 50 and 100 people, Ping said on Tuesday. The government’s official casualty count stands at just three dead.

Ping, a 72-year-old  former African Union Commission chairman, has yet to announce whether he will challenge the election result in the Constitutional Court.

The deadline for doing so is 15:00 GMT on Thursday.

In their analysis, the EU election monitors said the number of non-voters and of blank and disqualified votes revealed a “clear anomaly in the final results in Haut-Ogooue”.

In an interview with Europe 1 radio, Bongo accused the EU observers of “overstepping their mandate” and said he too was preparing to challenge some of the results.

“Ping committed fraud” in his home constituency and others with the help of “cyber-criminals”, he told Europe 1.

Bongo, 57, is under increasing pressure at home and abroad after Justice Minister Seraphin Moundounga resigned on Monday, demanding a recount “polling station by polling station”.

Bongo also accused Ping of attempting “massive fraud” and said it was difficult to envisage dialogue with “people who ask the Gabonese to go into the street to loot and destroy and burn things”.