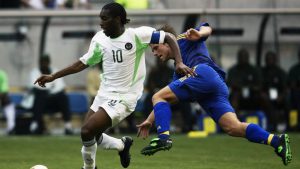 With the release of Fifa 17 few weeks away, the Lille’s goalkeeper is rated as the second best Nigerian behind veteran Okocha who leads with a rating of 84

Nigeria internationals Vincent Enyeama and Jay Jay Okocha have been rated as the top Nigerians in the yet to be released Fifa 17 after EA Sports revealed its top 20 players in Europe’s top five leagues and the top dribblers  respectively.

Lille’s Enyeama who made the list of top 20 players in Ligue 1 was ranked in the 11th position with eight other players, with a score of 83.

Okocha who has been placed in the Legends’ team alongside Pele, Scholes, Ferdinand, Del Piero, Puyol was awarded technical attributes of  84 in pace, 80 in shooting, 81 in passing and 90 in dribbling.
*Goal/Yahoo
0