By Nangayi Guyson*
Born-again churches in Africa are becoming ever more popular, politically powerful, and lucrative. But criticism may also be growing. 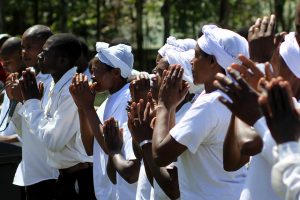 Pentecostalism has skyrocketed in popularity in Africa over the past few decades. Credit: Adam Cohn.

On a bright Sunday morning, the roads on the slopes of Makerere are still muddy from yesterday’s heavy downpours. But these adverse conditions are little discouragement to the throngs of worshippers making their way to the House of Prayer Ministries International in Uganda’s capital of Kampala. Thousands disembark from cars and boda-boda or walk on foot to the church premises where they pass through security checks and take their seats under huge tents.

The person they are here to see first and foremost is the Pentecostal pastor Aloysius Bugingo. The father of four used to be part of the Victory Christian Centre led by the prominent preacher Joseph Sserwadda, but after the two men fell out a few years ago, Bugingo set up his own church. Since then, the charismatic performer has drawn huge crowds, preaching a provocative message that has proven as popular as it is controversial.

“You see all these people,” he says to African Arguments, pointing to the multitudes of churchgoers watching as the choir opens proceedings. “Many have been robbed of their properties and money, been raped, promised instant miracles and many other things you can’t mention by our own pastors”.

He explains that under the so-called ‘prosperity gospel’, many Pentecostal preachers tell worshippers that in return for donating huge sums of money, they will be cured of diseases or be rewarded in material wealth several times over. But Bugingo condemns these teachings.

“This business of pastors sending invitation letters to flocks with instructions on how much money they should give in church is real robbery,” he says. “If you tell people to sow in order to prosper, are you a magician to ensure overnight riches?”

This message has resonated with many churchgoers and Bugingo’s sermons are now reportedly attended by around 20,000 worshippers each Sunday.

“I was attracted by his wonderful truthful preaching aimed at putting God’s people on the right track of seeking his faith but not stealing from them”, says John Wamboga, who explains that he turned to Bugingo’s church after hearing several stories about fraud being committed by other pastors.

The rise of Pentecostalism

Pentecostalism has a long history in Uganda and Africa more broadly, but it was in the 1980s and 1990s that the religion started to grow particularly rapidly, often pushed by churches in the US. Preaching a strongly evangelical version of Protestantism that emphasises personal contact with God and the power of divine healing, Pentecostal churches popped up all across sub-Saharan Africa.

According to the World Christian Database, nearly half of all Nigerian and South African Christians were Pentecostal by 2010, while the movement accounted for the majority of Christians in Botswana and Zimbabwe. Estimations are difficult to make, but the organisation claims that there are now a colossal 400 million born-again Christians in Africa.

Many individual pastors have even become superstars. Some have started up television and radio stations that broadcast to large populations, and on the back of donations, have become enormously wealthy. Pastor David Oyedepo, for instance, is reportedly worth $150 million; Chris Oyakhilome is believed to be worth up to $50 million; and TB Joshua’s wealth is estimated at around $15 million.

However, while Pentecostalism has deepened, criticisms have also grown along with accusations that pastors have deceived churchgoers to get rich.

“It is nothing new that some preachers in Africa are using the Bible through its scriptures to coerce their audiences to pay lots of money, saying whatever they give, will be given back to them,” says Margaret G. Gecaga, a Professor in Philosophy and Religious Studies at Kenyatta University. “For some preachers, the more money you sow in church, the more blessings you get, but this is done because many innocent church followers think God speaks through these pastors and they have to obey God’s voice.”

Fatuma Nassoziwho is one such churchgoer who put her faith in a preacher only to lose many of her belongings. “About ten members in our church sold cattle, shops, plots of land and other house items like fridges, TVs and sofa sets on the advice of our pastor, claiming we will be able to replace them in a matter of a few months…but he disappeared,” she says.

It is allegations of dishonesty such as these that Bugingo’s sermons are tapping in. However, while he has grown his congregation, his sermons have angered several other pastors who have allegedly joined forces against him.

Bugingo claims a group of preachers petitioned the city authorities to evict his church from its previous location in the centre of Kampala. And last year, over 50 of them called on the Uganda Communications Commission (UCC) to cancel the broadcasting license for Bugingo’s media platforms Salt TV and Salt Radio.

“I was concerned as a Christian about the abusive language pastor Bugingo was using to attack fellow pastors calling them thieves and wild cats”, says lead petitioner Kivumbi Earnest Benjamin. “What I did was to reach out to the leading pastors in the country [as well as] the president to stop him, but I was surprised to see…the materials I submitted were not fit for cancelling licenses for his media.”

Several preachers also accuse Bugingo of being hypocritical for criticising other pastors whilst still asking for money from his own congregation. This was especially the case recently when he needed to raise the $2.5 million necessary to buy the church’s new huge plot of land.

“In the beginning , he preached against the envelope culture of collecting money in church, but when the time came for him to collect money for buying land, he became wild and asked folks to even bring it US dollars,” says Pastor Boni who heads a small church in one of the Kampala’s slums.

But Bugingo rejects these accusations, insisting that he asked for these donations in a transparent and open way rather than by tricking his followers under false pretences.

“My preaching is affecting so many false pastors because the truth is bitter,” he says. “Many are now sending me death threats.”

Many worshippers across the continent have lost large sums of money to Pentecostal churches, and many citizens blame governments for failing to better protect churchgoers against exploitation. However, it should be noted that another aspect of the rise of Pentecostalism has been the growing political power of these churches, which have used their popularity, wealth, and sometimes support from US churches to exert influence.

Ahead of Uganda’s elections this year, for example, many of the country’s pastors – under the umbrella body National Fellowship of Born-Again Churches – held massive prayer conferences and rallies in which they endorsed President Yoweri Museveni, calling him “God’s gift to Uganda”.

Furthermore, Pentecostal churches in Uganda have become powerful political actors in shaping debate and driving policy, with influential figures such as a First Lady Janet Museveni and Speaker of Parliament Rebecca Kadaga known to be close to leading churches. The passing of Uganda’s notorious anti-gay bill, for example, was widely seen as a “gift” to the churches.

Anyone who is critical of Pentecostal pastors is therefore likely to come up against strong resistance, though opposition against certain practices may be rising amongst worshippers, other Christian leaders, and – in the case of Bugingo – fellow preachers.

Powerful pastors have strongly criticised Bugingo, but with accusations of deceit increasing and his sermons attracting such huge crowds, there is the possibility that others could be persuaded to follow his lead – including fellow preachers such as David Bweyinda of Masajja Redeemed Church in Kampala, who confesses: “Some pastors have hated me for not entering into this battle, but I can’t fight a fellow Christian who is telling the truth.”

*Source African Arguments.Nangayi Guyson is a freelance journalist based in Uganda. You can follow him on Twitter at @nguyson or read his blog.