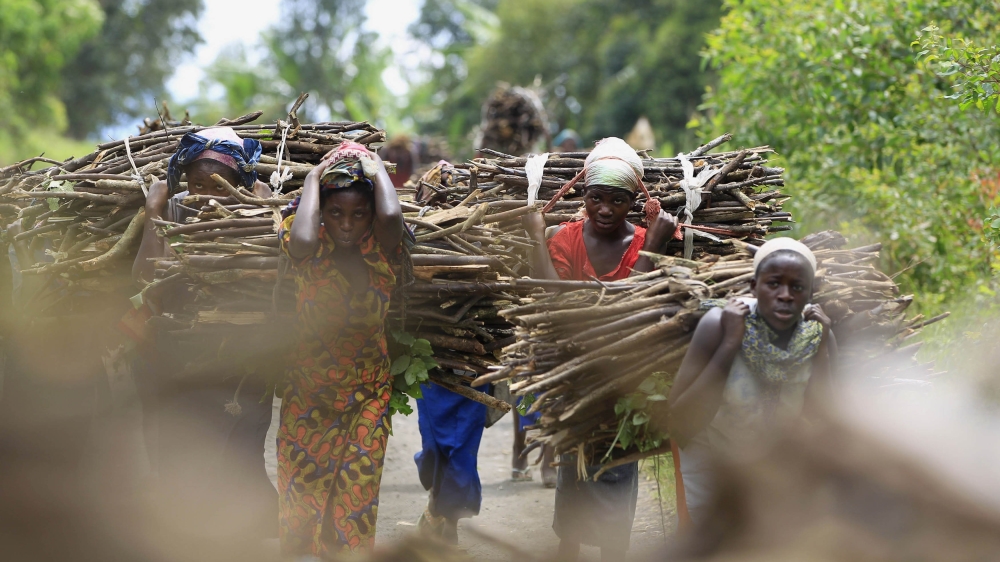 Accused of raping his eight-year-old neighbour, the man was handed a recommended sentence of 20 years in prison and a 100,000-franc fine (about $102) after about 10 minutes of questioning. The verdict was read in French, a language the defendant does not speak.

In the last case of the day, the recommended sentence was a fine of $6,000, a sum no defendant is likely to be able to pay in a country where the per capita gross national income in 2015 was $410.

Mobile courts like this one work within the Congolese justice system to bring justice to isolated areas.

Bunia is a small city in the Ituri region of Orientale Province in the eastern Democratic Republic of Congo (DRC). There are two main hotels, few paved roads and lots of wooden shacks. The streets are dusty; electricity is sporadic. In the evenings, the skies fill with the whir of United Nations helicopters.

Just outside the city, a number of armed groups engage in relentless fighting, in which killings, rapes and kidnappings are common.

Places like Bunia often employ mobile courts to help ease caseloads in more urban areas. Often utilised for hearings of sexual violence cases, the courts are paid for by NGOs, including the national women’s organisation SOFEPADI , which serves victims of sexual violence.

Despite providing the service in remote areas where often no other justice system is available, the mobile courts are far from perfect. Numerous logistical and infrastructure hurdles weaken their authority and influence.

In court, the perpetrators are condemned, explains SOFEPADI president, Julienne Lusenge, “but they never pay for reparation”. The victims and their families often do not attend hearings, defence lawyer Godhi Naguy explains, because they see the procedure as useless.

In 2014, 140 of the 407 women seeking treatment at the SOFEPADI Bunia centre went to court, according to Carine Novi, who is in charge of communication and fundraising for the organisation. Of those, 80 percent received a judgment.

Grace was one of those helped. A chubby 16-year-old with braided hair, she looked away as she told her story to Al Jazeera.

Her two-year-old daughter sat on her lap. Grace was 14 when her father raped her.

She kept quiet at first, but a week later she told her mother, who called the police. They also contacted SOFEPADI. The organisation helped the family with food, clothing and medical care. They gave Grace $200 and she took the case to court. She never received any compensation, but her father was sentenced to 25 years.

He was moved from a prison in Bunia to one in the capital, Kinshasa. Shortly after, however, he returned to Bunia – a free man.

“We were surprised to see him come back. We don’t know if he paid or what,” she says. “He hadn’t even spent two years in jail.”

By 3pm, as testimonies were made, the judge in charge of the proceedings, who also presides over the main court of Bunia, was taking phone calls on his mobile phone. After the proceedings ended an hour later, the judge explained that they were supposed to stop work at 3pm but instead had worked beyond that and for that, they needed more money from SOFEPADI.

According to the United Nations Population Fund, there were 11,769 reported cases of sexual and gender-based violence in the first nine months of 2014 in five eastern provinces; 42 percent of them occurred in Orientale Province.

The true number may be even higher, says Dominique Vidale-Plaza, the women’s protection adviser to the United Nations Organization Stabilization Mission in the DRC (MONUSCO).

The government has come under criticism for its response to the problem. In 2013 and 2014, during the Minova rape trial, in which Congolese government soldiers were accused of raping more than 1,000 men, women and children over a 10-day period, 39 members of the armed forces were charged with sexual violence. Only two of the accused, however, were convicted of rape.

According to a 2015 Human Rights Watch report, the investigation and trial “failed to establish what exactly happened in Minova, to identify those who were responsible for the crimes, and to bring justice to the victims”.

READ MORE: Beni, DRC – ‘They hacked him and threw him in a pigsty’

In speeches, Lioko described the challenges, including limited resources, armed conflicts and a need for better coordination among different groups. She has implemented a six-pillar plan to tackle the issue: assessing progress, fighting impunity, prevention through education, economic reintegration, memory and advocacy.

Citing the 135 military officials and 150 civilians convicted of sexual violence in 2014, Lioko also described breakthroughs in getting top rebel commanders to sign declarations to work towards ending sexual violence.

French justice consultant Jean Charles Paras believes the mobile courts are inadequate. Since he began his work in DRC in 2000, international organisations such as Lawyers Without Borders (ASF) have funded several programmes to improve the justice system, says Paras.

The American Bar Association has provided legal counselling to 14,986 sexual and gender-based violence victims and helped 9,215 of them to file their cases, resulting in 1,432 trials and 1,027 convictions. The bas association has also facilitated the organisation of mobile courts.

The annual budget fluctuates but is more than $2m per year for the country programmes, which currently include criminal law reform and anti-human trafficking, as well as women’s rights, under which the mobile courts fall.

“All that money given here was given on behalf of the fight against impunity based on the hypothesis that supporting the justice system would help to fight impunity,” Paras says, adding that impunity “is one of the major causes of the continuation of this type of violence against women”.

In a 2011 report, Amnesty International said that due to widespread impunity, crimes under international law, including rape and murder, committed by the Congolese army and armed groups in DRC, continue. The report added that enforcement of judgments in DRC was rare and that there was not a single case in which compensation had been paid by the government to the victims when it was held accountable by the courts for these crimes under international law.

The compensation procedure is “difficult” and “inconsistent”, according to Charles-Guy Makongo, the country director for the ABA. Victims must go through another procedure to show they are indignant, a procedure for which they have to deposit money before they can receive reparations. The process can be expensive and confusing for victims and their families.

The mobile court judge back in Bunia says there are established criteria for receiving money and that people can’t be forced to pay, but he did not elaborate further.

Makongo acknowledges that a lot of money has been spent over many years, but says the situation is also linked to the sheer size of the problem.

“We are contributing to rebuild[ing] the system in a huge country,” Makongo says.

Vidale-Plaza says that even tasks like gathering forensic evidence can be difficult in a country lacking basic infrastructure. “Relying on health centres to have [the necessary] cold storage [for forensic evidence] when they often don’t have electricity or water is just impossible,” she says.

Makongo cites cultural barriers as another hurdle. In some communities, he says, it is considered taboo to hang on to the dress a girl was raped in, so evidence is destroyed. Judges have also been known to show cultural bias, he says. In the DRC, rape victims are often shunned for disgracing their families rather than treated as victims.

Day two of the mobile court began at noon, two hours later than scheduled. This time the court session was held in a makeshift courtroom at the jail. The room was tiny, with space for just three wooden benches etched with the name of the university to which they once belonged.

The first defendant was accused of raping a 15-year-old girl with whom he lived for a year. His lawyer argued that a cow the man had given the girl’s family was a dowry, which would imply the two were married. Various documents were referenced. Each side gave a different age for the girl, who was not there to explain the discrepancies. The recommended sentence was 16 years and a $10,000 fine.

READ MORE: Scars of rape in the DRC

By the third day, it seemed everyone was ready for the proceedings to end, except for the defendants.

Sebastian Nebasa, a 20-year-old in flip-flops with peach fuzz above his lip, said he was heading to football practice when the sister of a girl he knew accused him of rape.

Following the accusation, he was beaten and taken to prison, where he has spent the past four months. He was looking forward to confronting his accuser at trial, but neither the girl nor her family showed up.

At the end of the trial, three armed police loaded Nebasa and the other defendants on to a truck.

The final court decisions were supposed to be released the following Tuesday, but two weeks later the court still had not reached a verdict for the cases, including Nebasa’s. The trial had cost SOFEPADI $4,000, says the organisation’s communications head, Novi.

For Paras, the problem is the lack of assessment and sustainability – when the international funding stops, their work stops, he says.

Makongo agrees that the mobile court system is not a long-term solution, but until the government is able to bring justice to rural areas, he says, it is better than nothing.