JOHANNESBURG (Reuters) – Deputy President Cyril Ramaphosa’s chances of becoming the next leader of South Africa got a boost on Monday when a powerful mining union backed him to succeed President Jacob Zuma.

Debates over who should follow Zuma, either when his term ends in 2019 or before, are heating up after the ruling African National Congress suffered its worst local election results last month, exposing party divisions.

Ramaphosa would be the first choice for many investors because he is more likely to support pro-business policies than many in the traditionally left-leaning ANC.

A decision has been taken “to support the candidacy of Cyril Ramaphosa for president” (of the ANC), the National Union of Mineworkers (NUM), one of South Africa’s biggest unions, said in a statement.

“It is not only NUM that is gunning for Cyril for president,” General Secretary David Sipunzi added, without giving details. Sipunzi said NUM wanted Zuma to see out his term.

Zuma is expected to stand down as ANC president at a party conference late next year, ahead of national elections in 2019 when his tenure as the country’s leader will come to an end.

The ANC has dominated since the end of apartheid in 1994 and is widely expected to retain control at the 2019 vote, making its next leader almost certain to succeed Zuma as president.

Ramaphosa, a wealthy businessman and founding member of NUM, is likely to face strong competition if he does compete for the ANC leadership, including from Zuma’s ex-wife, Nkosazana Dlamini-Zuma, who is currently head of the African Union.

Neither Dlamini-Zuma or Ramaphosa have declared their intention to run for leadership of the ANC.

“START OF THE CAMPAIGN”

The ANC rules in an alliance with the South African Communist Party and trade union group, COSATU, both of which will play an important role in lobbying for Zuma’s successor.

“It’s the start of the campaign and it will gain momentum,” said Gary van Staden, a political analyst at NKC Economics.

“Other COSATU members should line up soon behind Cyril. His prospects are good.”

Dlamini-Zuma is a Zulu, the largest ethnic group in South Africa, and were she to run would likely have the support of Zuma’s powerful voting block within the ANC.

Despite their separation, Zuma backed her for the AU job and gave her a position in his cabinet. Analysts say she would be unlikely to follow up on several high-profile corruption cases that have plagued his tenure.

Zuma has faced calls to quit from several members of the ANC following the local election results and a string of graft scandals but the party’s top echelons have backed him.

Zuma’s younger brother Michael became the latest to call for his resignation, urging him to quit or risk being killed, the Sunday Times reported. 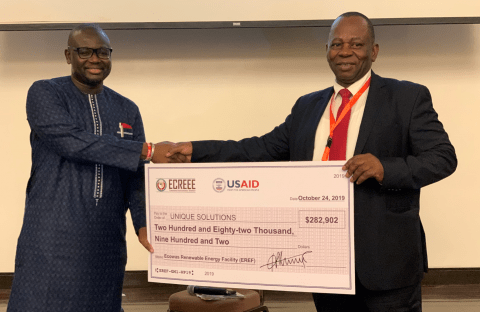 Unique Energy to embark on The Gambia’s First Green Mini-Grid Electricity Project to a tune of D30.6 Million Dalasis