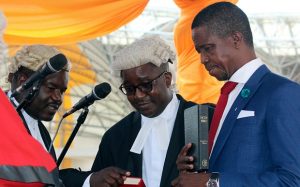 At least four heads of state including Zimbabwe’s Robert Mugabe and Uganda’s Yoweri Museveni are expected to attend the inauguration of Zambia’s President Edgar Lungu that will take place in the capital Lusaka tomorrow.

Lungu was declared winner of the August 11 vote ahead of Hakainde Hichilema who disputed the results citing irregularities.

Hichilema went ahead and filed a petition in the country’s constitutional court but lost the case.

The country’s High Court rejected an application by the opposition leader to block Lungu’s inauguration, giving the president the green light to take oath for a new five-year term in office.

Lungu has led the ruling Patriotic Front since his predecessor Michael Sata died in 2014.