Such imports have devastated the local clothing industries and led the region to rely far too heavily on the West.

Clearing your closet of last season’s gently worn clothes and donating them to an aid group probably makes you feel pretty good. After all, you may be helping someone in need and breathing life into items that might otherwise decompose in a landfill.

But a number of countries in East Africa are fed up with the onslaught of secondhand items they receive from Western nonprofits and wholesalers, and want to ban such imports altogether.

In 2014, a handful of East African countries imported more than $300 million worth of secondhand clothing from the United States and other wealthy countries. The used items have created a robust market in East Africa and thereby a decent amount of jobs. But experts say the vast amount of these imports have devastated local clothing industries and led the region to rely far too heavily on the West.

In March, the East African Community (EAC), which is made up of Kenya, Uganda, Tanzania, Burundi and Rwanda, proposed banning all imported used clothing and shoes by 2019. The goal is to stop relying on imports from rich nations, boost local manufacturing and create new jobs.

However, the law is unlikely to pass. There is resistance from the U.S., which unloads hordes of secondhand clothes all over the world, and from sellers in East Africa whose livelihood depends on these shipments, as well as from experts who think an outright ban won’t be enough for these countries to restore production at home.

Proponents of the ban say it has the potential to help empower East African economies. “[T]he region … is ready to transition itself into an industrial blocthrough a higher level of production quality and manufacturing practices,” Betty Maina, Kenya’s principal secretary in the Ministry of EAC, told newspaper The East African.

There is also hope that a ban will instill a new sense of pride in the region’s people, since “no one goes around proudly showing off” someone else’s discards, noted Joseph Rwagatare, a columnist for The New Times, a Rwanda-based news outlet.

Once these discarded clothes hit East African shores, they sell for extremely low prices: For example, a pair of used jeans can be as little as $1.50 in the Gikomba Market, East Africa’s biggest secondhand clothing market, located in Nairobi, Kenya.

Rock-bottom prices make locally made clothes look too expensive by comparison, Joseph Nyagari of the African Cotton & Textiles Industries Federation told Think Progress last year. “The average cost of a secondhand garment is between five and 10 percent of a new garment [made in Kenya], so [local industries] can’t compete,” he said.

Africa has been contending with inexpensive imported used goods since the 1980s, when a debt crisis in Latin America exploded and disproportionately hurt poor countries. Production costs rose in developing areas, which led to a decline in exports. Government subsidies to the manufacturing sector in Africa were cut,restrictions on foreign trade were removed and the floodgates opened for overseas exporters, according to a 2006 study on the textile and clothing industry in sub-Saharan Africa.

Fast-forward 10 years, and East Africa is still limited in its production of clothing and textiles. Kenya currently has just 15 textile mills, according to Fashion Revolution, a U.K.-based group that promotes sustainable clothing manufacturing. The Uganda Manufacturers Associations has about 30 garment and footwear producers among its members ― but “this is not enough to satisfy the domestic market,” according to the Overseas Development Institute, a United Kingdom-based think tank.

Nevertheless, one U.S. ambassador has already expressed concern about the secondhand import ban, according to the Daily Monitor.

In August, Deborah Malac, U.S. Ambassador to Uganda, met with Rebecca Kadaga, speaker of the Parliament, to discuss the ban. She warned that enacting it would “negatively impact” the benefits Uganda gets from the African Growth and Opportunity Act, which aims to expand U.S. trade and investment with sub-Saharan Africa in order to stimulate economic growth in the region. That law also gives African countries duty-free access to the U.S. apparel market. To qualify and remain eligible, each country must make an effort to improve its rule of law, human rights and respect for core labor standards.

The Huffington Post reached out to Malac, but she declined to be interviewed for this story.

It makes sense that the U.S. would push back against the secondhand clothing ban, considering that used clothing is a lucrative industry involving multiple sectors.

The global wholesale used clothing trade is valued at about $3.7 billion, according to The Guardian.

Uganda alone imported 1,261 tons of worn clothing and other items from the U.S. last year, according to the United Nations Comrade Database. And secondhand garments make up 81 percent of all clothing purchases there.

The exporters who have the most to lose will likely put up a fight. Suppliers likeGlobal Clothing Industries, for example, solely send and ship used clothing, shoes and other items overseas. GCI exports to 40 countries in Africa, Asia, Australia, Europe and North and South America.

Even nonprofits like Oxfam and Salvation Army aren’t giving away secondhand clothes for free. When supporters drop off unwanted goods, those organizations often deliver donated clothing to the developing world and sell them to traders. They, in turn, sell the items in their local markets, according to The Guardian.

Many local traders are vehemently opposed to the proposed legislation as well.

“Just let them dare,” Elizabeth, who sells women’s dresses in a downtown Nairobi market, told The Economist in March. “How could they! We will remove our clothes, we will demonstrate in the streets.”

In Nairobi’s bustling Gikomba market, a trader can make 1,000 Kenyan shillings (about $10) a day selling secondhand clothes, a decent living. Many people in the area get by on about a tenth of that, according to The Economist.

However, the secondhand industry is rife with uncertainty, and traders have little control over the available clothing. Much of it is in poor condition and the western sizes often don’t fit customers well.

Some experts doubt that banning imported secondhand clothes alone will revitalize the local industry in the region.

Even if the region were to ramp up its production, its products wouldn’t necessarily be affordable and would mostly hurt poorer citizens, according to Andrew Brooks, author of Clothing Poverty: The Hidden World of Fast Fashion and Second-hand Clothes.

Furthermore, the proposed ban wouldn’t block imports of new clothes, which would be more expensive than used clothes, but still cheaper than locally produced items, Brooks wrote in The Guardian earlier this year.

“If East African leaders want to do more than maintain the status quo they need to take bold decisions,” Brooks wrote, “even if this means sometimes taking decisions that might be unpopular with international advocates of free trade.”

Given that the proposed ban probably won’t become law, there are others who argue that Western consumers need to find more responsible ways to dispose of their barely worn items.

“We need to find better uses for that ‘going-out top’ bought for $15 and worn only twice,” Kelsey Halling, director of impact for Thread International, a group that repurposes garbage, wrote in an op-ed for Sustainable Brands. “Places such as Uganda, and Haiti, and India shouldn’t have to be – and very soon may choose not to be – responsible for our excess.” 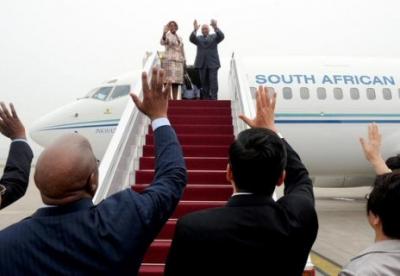