Africa and space: the continent starts to look skyward 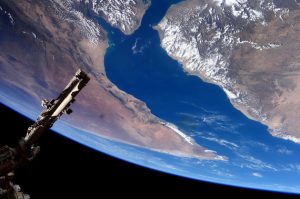 Most do not associate Africa with the high-tech sphere of “space”. However, in recent years, many countries on the continent have woken up to the potential and usefulness of space technology. In sub-Saharan Africa, Nigeria and South Africa are leading the charge.

What have South Africa and Nigeria have achieved?

Both countries have recognised the usefulness of satellites for earth observation, telecommunications and advancing space science. They have funded and overseen a number of launches.

And in early 2015, the Kondor-E satellite built for South Africa in Russia was launched into orbit. It provides all-weather, day-and-night radar imagery for the South African military.

Earth observation satellites can collect data on areas of importance to a country’s economy and well-being such as agriculture, natural disasters and elections. Nigeria has used its satellites to monitor the oil-rich Niger Delta . Its satellites have also been used in election monitoring, providing crucial information about voters who may otherwise have been overlooked by poll workers.

Satellites have also proved useful in the fight against extremist groups such as Boko Haram. In 2014, Nigeria used its SatX and Sat 2 to monitor the group’s movements and to help find the 273 girls it had abducted.

There are limits to how useful satellites can be in these situations. Finding those kidnapped proved difficult because the satellites only have a 2.5 metre resolution. This means that you cannot trace individuals’ movement – you can only get maps of some locations at some particular times.

Also, because satellites move from one location to another, it means that it can take up to four days for one to get into position to take a particular photograph.

Amnesty International has pioneered the use of satellite images for human rights research and advocacy over the past six years using imagery from GeoEye and DigitalGlobe. It has also used satellite imagery to collect information about Boko Haram’s activities. Satellite photos taken in January showed the scale of the group’s atrocities after they attacked the towns of Baga and Doron Baga.

South Africa has harnessed earth observation satellite capability to do human settlement mapping. This has enabled it to monitor urbanisation by examining the growth of settlements and the transformation of housing. It provides useful data for service delivery projects and town planning.

As the largest space agency in southern Africa, SANSA frequently provides disaster monitoring and post-disaster assessment for South Africa and the region. Fires and floods are the most common natural disaster. It also monitors space weather effects and forecasts, which are crucial for aviation.

Other African nations are getting involved

Other growing sub-Saharan African countries have recently begun space programmes. Ghana launched its Space Science and Technology Centre in 2012. Kenya started its space programme in 2012. Kenya’s geographic position on the equator makes it ideal to launch satellites into geostationary and other orbits.

Oil- and mineral-rich Angola plans on launching its first satellite, AngoSat-1, into orbit by 2016. It is being built by a Russian consortium.

North African nations are no strangers to space and satellites. Algeria, which established its space agency in 2002, launched five disaster monitoring microsatellites in the 2000s, and an earth observation satellite in 2010. The latter was launched from Chennai, India.

Egypt, like South Africa, now has its own military satellite thanks to Russian assistance. Egypt launched its first satellite in 2007 for scientific research, but has run into recent concerns over human and financial resources.

Along with Sudan, Egypt has been at the forefront to establish a African space agency to combat some of the monetary and skills issues. The African Union Working Group on Space recently approved a draft African space policy and is currently developing a comprehensive space strategy.

However, even if African resources and skillsets are combined, an operational African Space Agency appears to be at least five to ten years away. Countries are focused on growing their own space agencies first. The project will also undoubtedly depend upon political relations between continental powerhouses Nigeria and South Africa, which are at a low.

Its effectiveness will depend on an African country developing domestic satellite launch capability, which is a huge necessary step forward in space exploration. Nevertheless, continued collaboration – such as SANSA working with the Zambia Remote Sensing Centre in a research project using satellite earth observation data for drought, soil and vegetation monitoring – will assist in speeding up the process towards a true continental space alliance.

Government space agencies aside, satellites over rural Africa can help provide Internet connectivity to hundreds of millions of African citizens. In June 2014, only 44% of the 410 million people who live in sub-Saharan Africa were living within 25km of an operational fibre optic network node. Facebook has reportedly been talking to satellite operator Avanti – which owns two broadband satellites over Africa – to help in this endeavour.

There is no question satellites and space exploration have socioeconomic benefits. Satellites can help find mineral resources. Satellites helped uncover an underground aquifer in Kenya’s driest region. The plethora of possible benefits is combined with other crucial hard to quantify advantages. These projects inspire youth, increase national pride and advance education.

But, space endeavours require capital. And for most African countries, capital is a limited commodity.