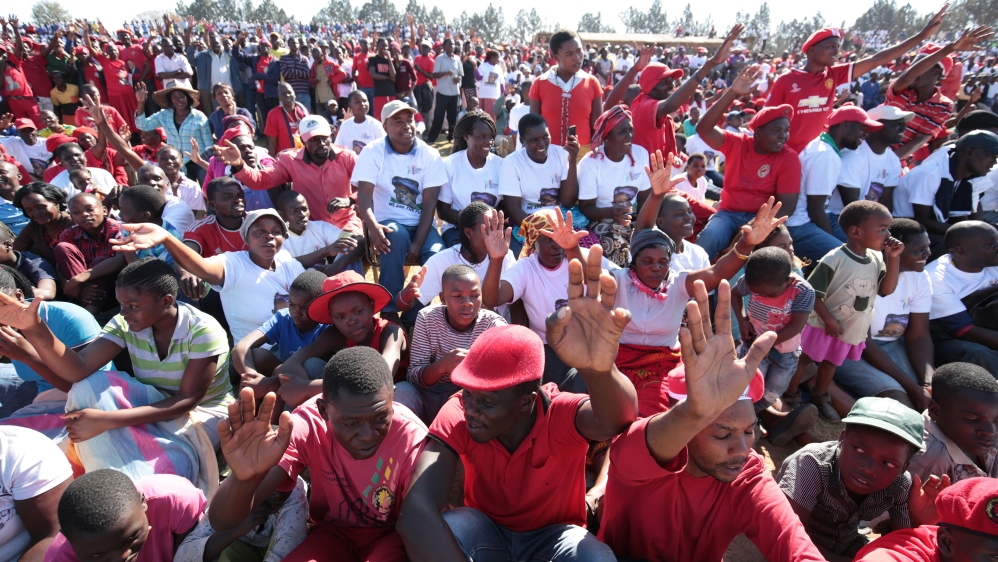 Zimbabwe’s opposition leaders led a mass rally against the country’s embattled President Robert Mugabe over his failure to resolve a worsening economic crisis.

Thousands of supporters gathered on Saturday to hear opposition leader Morgan Tsvangirai and ex-deputy president Joice Mujuru denounce Mugabe and call for unity among opposition parties to defeat the 92-year-old president who has held power for almost 30 years.

“We need a collective consensus of all Zimbabweans to make sure that Mugabe listens to the voice of the people,” Tsvangirai said in Gweru, some 220km southwest of the capital.

“I don’t hate Mugabe but I disagree with him that he gets to 92 and does not want to leave the throne,” Tsvangirai told the crowd, according to the AFP news agency.

Mujuru, the widow of Zimbabwe’s first post-independence army general, was fired from Mugabe’s government and the ruling ZANU-PF party in December 2014.

Before being sacked, Mujuru had been seen as Mugabe’s favoured choice of successor. She launched her own party in March.

“We want the people of Zimbabwe to work as one not to be divided. Today we found a way of working together to deal with issues affecting us,” Mujuru told the rally.

Others hoisted placards reading “Where are the promised jobs?” “Stop Abductions” and “No to bond Notes” — referring to the pending introduction of controversial bond notes, a local token currency equivalent to the US dollar.

Zimbabwe has been hit by a series of street protests triggered by an economic crisis that has left banks short of cash and the government struggling to pay its workers.

Also on Saturday, state media reported that there would be delays – once again – in paying the salaries of civil servants.

The Herald newspaper reported that August salaries for army personnel, police, teachers and health workers would be delayed by at least a week. In July, government employees staged a strike over late pay.

“It is a fact that we have revenue challenges,” Prisca Mupfumira, Zimbabwe’s public service minister, told the newspaper when announcing the new pay delay.

In June only police and security forces were paid, while other civil servants received a $100 advance with the news their salaries had been delayed.

Zimbabwe spends at least 80 percent of its revenue on state workers’ wages, according to officials, while about 90 percent of the population has no formal employment.