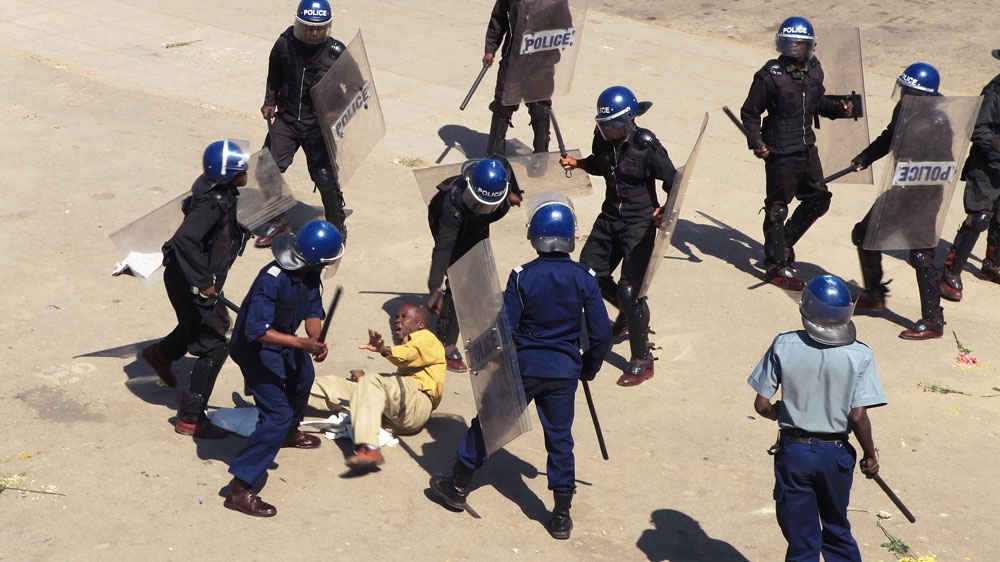 Zimbabwe police have fired tear gas and water cannon to disperse several hundred protesters calling on President Robert Mugabe to step down, a week after the longtime ruler warned that protests “don’t pay”.

Some 200 people had gathered in central Harare on Wednesday, carrying flowers for peace and holding posters reading “Mugabe Must Go”, when baton-carrying police moved in.

An AFP journalist reported seeing police officers beating protesters with batons before firing on the crowd with tear gas.

Reuters reported that at least one of the protesters sustained deep cuts to the head from a baton beating.

Onlookers, pedestrians and motorists were caught up in the melee as anti-riot police moved in with their batons, maintaining a heavy presence in the city centre after the demonstration was dispersed.

“There will be no business as usual,” he told AFP. “Everybody must participate.”

The demonstrators are also protesting against the plan of the country’s central bank to re-introduce local banknotes, which they fear could trigger inflation and wipe out people’s savings and pensions.

Mugabe said last week that protests “don’t pay because usually they end up being violent protests”.

Mugabe has ruled Zimbabwe for 36 years.

But as his cash-strapped government struggles to pay civil servants and the military on time, the veteran leader has faced mounting opposition fuelled by internet activism using the hashtag “ThisFlag” – a reference to wearing the national flag in public.

Several war veterans’ leaders, long seen as loyal allies of Mugabe, have also been arrested after issuing a strongly-worded statement last month calling on the president to step down.

Mugabe, 92, is increasingly fragile but has vowed to stand for re-election in 2018, though party seniors have long been jockeying to step into the role when he dies.

Mugabe’s wife Grace and vice-president Emmerson Mnangagwa are among the possible successors to the world’s oldest president.