Zambia’s voices on the elections and their future hopes 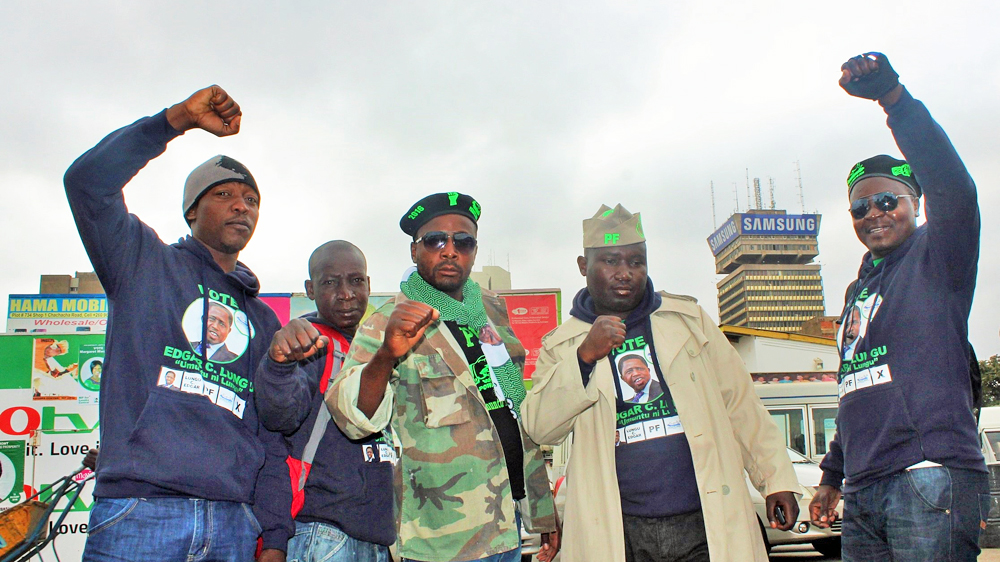 Lusaka, Zambia – Flags pinned to masts flap in the wind and colourful posters plastered on walls across Zambia urge voters to make their choice in the August 11 presidential and parliamentary elections and in a referendum on the Bill of Rights in the Constitution.

On the streets of the capital Lusaka there is a buzz of excitement for another contest between the front-runners, incumbent President Edgar Lungu, of the ruling Patriotic Front, and Hakainde Hichilema, a wealthy businessman, leading the United Party for National Development.

The winner must gain more than 50 percent of the votes. After last year’s snap election which Lungu won by a small margin, some voters in Lusaka, the ruling party’s stronghold, told Al Jazeera they were confident of the Patriotic Front (PF) getting a larger share of the majority vote.

Recent tensions between the PF and the United Party for National Development, saw clashes in one neighbourhood, Mtendere, just days before the vote and previously led to a 10-day suspension of campaigning in some parts of Lusaka.

Voters spoke to Al Jazeera expressing their concerns about the state of the declining economy, youth unemployment, Zambia’s energy woes and the political environment in which another hotly contested election takes place.

The biggest challenge during this campaign period has been with the youth in politics who consider themselves the big men, they only want to promote their own party and make sure that nobody else with a different view can express it.

In Chawama [Lusaka] where I live, there have been some problems and the political youth have taken power into their own hands and the police don’t even have a say.

It’s the ruling party’s stronghold so nobody can say anything and there’s no room for the opposition to campaign equally.

If we lived in a democracy that opportunity would be there and everyone would be free to make their choice, but we can’t and we are too afraid to say anything.

When I vote on Thursday, I will be voting for a leadership that can put an end to this because we can’t say we live in a democracy when we Zambians are not free to show our support for different parties.

I come from the Eastern Province [where President Lungu is popular] and although people might want the PF to win because of that, we also need to look at what they can do for us.

The cost of living in Zambia is very high nowadays and we need a leadership that can create opportunities for the youth and reduce the costs of basic things such as the price of mealie meal [maize flour].

This year it went up because of the drought, but politicians on both sides promise it will come down because this year there will be rains, but only God knows if the rains will come.

Anyway I will place my vote for PF because I think they can bring us through the hard times we are facing, we can’t be sure of what the others can do so I will choose what I know and what Zambians have seen and tested.

During an election period people get very anxious and emotions are always running high and so many here in Lusaka are concerned about violence.

There is a tendency to blame the ruling party for some issues that are really between communities and things get blown out of proportion.

Perhaps this is why we don’t need change and we can lobby for the changes we want from the government we have rather than just changing everything.

I’m confident the present government can address the concerns over the rising cost of living and healthcare so that’s where I’m placing my vote rather than hoping for change from the opposition candidates whose mere presence in politics generates a lot of talk and false fear.

I often drive to Mtendere [Lusaka] where there have been some issues between parties, if the PF green cadres see you putting on a red shirt they can accuse you of supporting the opposition, but I don’t, this will actually be my first time to vote.

Sometimes it doesn’t really matter who you vote for, but it’s whether or not the problems can be fixed especially the problem of youth unemployment.

The politicians promise us a lot of things, but I don’t know if I can trust that there will be real changes for the youth after I’ve voted.

They say they will provide us with money to support our projects and they can create more jobs that can pay us enough to survive, but since things are very tough at the moment, people could just vote because the politicians make very good promises.

On Thursday it’ll be my first time to vote and I’m happy I’ll have the opportunity to choose the party of my choice.

The Patriotic Front under President Lungu have a chance to be in power for a full five years and we can see what they are capable of doing. In just this short time since 2015 when Lungu was elected to take over after President Michael Sata’s death, the PF have constructed roads and tried to improve the housing situation for some communities.

Now we will also be voting for changes to the constitution to make sure every Zambian will have a right to decent housing and this shows what Lungu and his government could do for the country if they were given a full five years in office.

Despite all our problems, the government has tried to live up to its promises and I hope this election will put them back in power to finish what they started.

We are going through a difficult economic period and the government has tried to diversify our economy so that we don’t depend too much on copper.

We also face serious power challenges and so we’ve had to look to other sources of energy such as solar and coal and if we continue to look for other alternatives it may improve the deficit we’re currently facing.

There is no perfect government out there in the world, even [President Barack] Obama in America was not perfect, so my choice will be for the one that has proven it is right for Zambia.

The post Zambia’s voices on the elections and their future hopes appeared first on African Media Agency.