“The World Must Help South Sudan with a third force to salvage Peace” – Reath Muoch Tang SPLM-IO, Representative to the USA 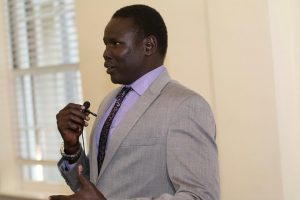 If the World really wants to help South Sudan out from this problem, let them expedite the processes of the third force deployment, says Reath Muoch Tang who represents the Riek Machar led SPLM-IO in the USA.  Tang, a former MP lashed out at President Salva Kiir for destroying the promise of South Sudan. Only God is incharge in South Sudan today as the government of President Salva Kiir has been against the peaceful resolution of the conflict. There is no way embattled Vice President Riek Machar can return to the capital Juba without ample security guarantees and a commitment on the part of Salva Kiir towards bringing peace to the country,he said. The replacement of of Riek Machar was illegal and only goes to show the bad faith of the Kiir government said Tang . The people of South Sudan have suffered enough and deserve to enjoy peace and talk about development, but this cannot be done with the kind of inept leadership that President Kiir has served the people of South Sudan , Tang said.

The return of Dr. Riek Machar was expected to bring peace to South Sudan, but instead, we see more fighting, why?

Yes, Dr.Riek Machar’s return to Juba was, in fact, a sign of peace to the Country, Dr. Riek Machar means to bring peace to the people of South Sudan. He is a man of peace; However, the Government is not for peace. Salva Kiir himself has been on the records, by always saying that the peace agreement was made in a way that, it is not going to be implemented. That tells you, the Government is against the peaceful resolutions of the conflict; Therefore, Dr.Riek Machar cannot bring peace alone by himself if his partner is not for peace.

Who is in charge in South Sudan today and where is Dr. Riek Machar and when is he going back to Juba?

I Would say that only God, is in Charge of South Sudan. As of today, there is no Government in place in South Sudan. there is no national army, what is there is a bunch of militias who are not well-trained soldiers, and they most predominantly come from one ethnic group. You can not have what you call a national army from one tribe, in a country that is composed of 64 tribes. Now what those militias are doing now is that they are looting the properties of the people that they suppose to be protecting, raping women and killing people, targeting them based on their ethnicity. In addition, a Government without functional institutions is not a Government. Dr. Riek is in Equatoria, not very far from Juba.  Dr. Riek will return to Juba. But he will return only when the regional forces are deployed, Juba is demilitarized and Taban Deng who was illegally installed as the First Vice President is removed. Because that will undermine the implementation of the Agreement

That was illegal and uncalled for. First of all, Taban’s membership was terminated from the SPLM-IO and he was also removed from his position as the member of the SPLM-IO political Bureau. For those above reasons, Taban Deng Gai had no legitimacy to call SPLM-IO leadership meeting. Second, some of our SPLM-IO Ministers who did not make it to the UNMISS protection Camp were threatened by Taban Deng Gai, using Government Security agents. Some of them were brutally tortured, for example, the SPLM-IO General Secretary who is also the Minister of Electricity and Dam, Hon. Dhieu Mathok Woul, was one of those tortured for not complying with Taban’s orders. Finally, Taban controls no army, he only has less than 5% of the SPLM, Political Leadership who are in Juba. How will he bring peace to the people of South Sudan? To me, the appointment of Taban means going back to war, which is what the Government wanted to see

What will it take for Dr. Riek to get back to Juba to take up his duties? 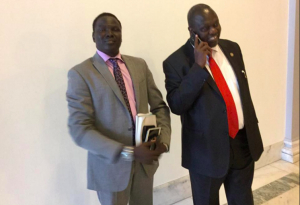 It is very simple. First of all, for Dr. Riek Machar to return to Juba, the government must do the followings: 1.Removal of the recently illegally appointed first Vice President which violates the terms of the Agreement 2.Immediate implementation of the Security agreement arrangements 3.Demilitarize Juba and other major capital cities . Put in place the joint integrated police . Reverse the decision of 28 states . Lift the state of emergency . Release all the war prisoners and political detainee . Reverse the unilateral decision to appoint the speaker of the National Legislative Assembly, which is against, the provision of the peace agreement. 3. Allow for deployment of the African Union forces to Juba to acts as the buffer between the two factions base on the resolution of the African union

And if he doesn’t return what happens, South Sudan should remain a kind of no man’s land, ungovernable and chaotic?

That will mean the collapse of the peace agreement.You need to know that, as of today, the Government is continuously on offensive. That alone also tells you how South Sudan will look like if that situation is not rescued quickly. While they the Government are calling for Machar to return back to Juba, they are also sending their forces to attack him at the same time.

Are both sides conscious or sensitive to the untold hardship that South Sudanese are going through?

The SPLM/SPLA-IO, is very conscious about the suffering of the people that is why they went to Juba with a hope that the Government will respect what they signed. The SPLM- IO first send in more than five hundred advance team to juba, then followed by its leader Dr.Riek himself in April. That is because they heard the cry of the people but and wanted to bring them peace, But Salva Kiir squandered that opportunity to bring a lasting peace in order to end the suffering of the people

There have been suggestions that a third force should be deployed or that South Sudan could even become a trust territory again, do you see any merit to these suggestions? 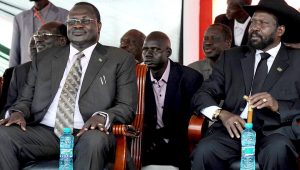 Yes, in order to save lives, the third force must be deploy and must be deployed sooner.If that action is taken, it will save more lives and also save the peace agreement which is on the verge of collapse. I don’t think the idea of trusteeship, is the solution now for South Sudan. If the World really wants to help South Sudan out from this problem, let them expedite the processes of the third force deployment, That will allow the safe return of Dr, Riek; Also, they must pressure the Government to adhere to the peace agreement as it was signed

South Sudanese do know what they want; they were only been let down by their leader, Salva Kiir, who they voted into the office and he later on turned to kill them. Salva Kiir has choosen to represents the interest of his ethnic group, through the Jieng Council of Elders JCE, instead of leading the whole nation. In addition, If the South Sudanese didn’t know what they wanted, they would not have voted for the Independence in such a unique Referendum.

My last word is that we need peace in South Sudan, our people have suffered enough of wars they are not ready to face more war right now. The people of South Sudan need to see development, they need roads, schools and hospital they are not ready for war at all; Therefore, I am urging the Government of Salva Kiir to stop its offensive against the SPLA-IO positions and allow the deployment of African union force. The only way to save the Country now is through peaceful resolution of the conflict, not war.

One response to ““The World Must Help South Sudan with a third force to salvage Peace” – Reath Muoch Tang SPLM-IO, Representative to the USA”