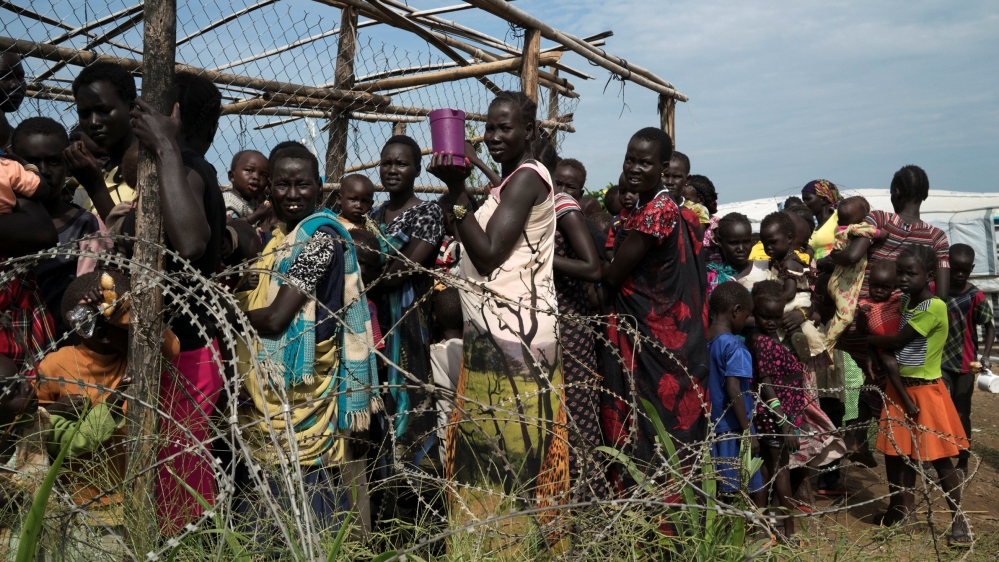 Ayaa Joyce and Beatrice Masudio might come from different parts of South Sudan but they are united in sorrow.

Having lost their husbands in the country’s latest round of violence, the two women gathered their children and few belongings and made the dangerous journey to reach refugee camps in neighbouring Uganda.

“When we reached the checkpoint, three people had been killed by some armed men,” Joyce told Al Jazeera’s Catherine Soi in northern Uganda’s Elegu town.

“Soldiers were gathering. They stopped us and searched us. When they realised we were from the Madi tribe, they let us go.”

Like Joyce and Masudio, the majority of the South Sudanese refugees in Uganda are women and children.

Alice Sunday, a 16-year-old from Juba, said many people had died in the recent fighting, and she and others had to sleep outside without shelter or food. Her school was closed down.

“What brought me from Juba is the war taking place in Juba …. Many people die. That is why we are here to save our life,” Alice also told our correspondent in Uganda’s Yumbe.

“We came here so we can get school and get food.”

This is the second time the teenager has been displaced by fighting. The first time was in 2013 when civil war erupted and she fled to Yei in South Sudan’s Central Equatoria region.

“We just want our future to be good,” Alice said of her second escape from the conflicts that have torn her country apart.

Almost 300 people, including at least 73 civilians, were killed in the recent fighting in Juba.

More than 1.6 million people in total have been displaced in the country due to conflict in recent years.

South Sudan was founded with optimistic celebrations in the capital on July 9, 2011, after it gained independence from Sudan in a referendum that passed with nearly 100 percent of the vote.

Chol Yoro worked in a bank in Sudan’s capital, Khartoum, before returning to South Sudan when the country achieved independence.

He says he moved back to help develop his country.

“But, unfortunately, I got the opposite, which is the war,” said Yoro, who is now a refugee in Uganda with his family.

Those fleeing the latest violence are screened as they cross the Ugandan border.

They are then put on buses and driven for hours over bumpy roads to reach settlement areas set aside by the Ugandan government.

The United Nations High Commissioner for Refugees (UNHCR) said it was registering around 1,000 South Sudanese each day who have fled to Uganda.

“We have reports that armed groups across the southern belt of South Sudan are burning down villages, looting properties [and] murdering civilians,” Charlie Yaxley, spokesman for UNHCR in Uganda, told Al Jazeera.

“We’ve had wide-scale reports of sexual assault being committed against women and young girls,” he said.

In some areas, armed groups are reportedly visiting schools in order to recruit boys and young men into their ranks.

Al Jazeera’s Soi, reporting from a refugee settlement in Yumbe, described the situation as “very dire”.

“Refugees who have come here are traumatised and tired. It’s a new settlement. Things are still being set up.

“Refugees are being given basic supplies like food and basins, cooking pots and things like that and they’re also construction material to build new shelters.

“This land was provided by the government. It’s a heavy thicket. So it’s going to take a while for them to clear the thicket and put up the structures.”