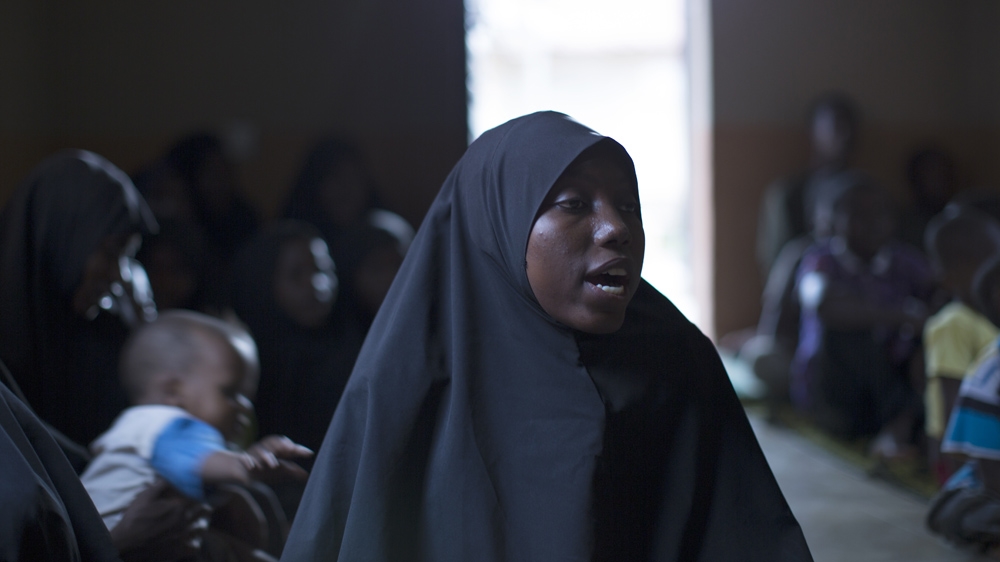 Abuja, Nigeria – Nearly 500 members of the Islamic Movement in Nigeria (IMN) hit the streets of the Nigerian capital, Abuja, in protest this week.

Young women wailed, while young men held up posters. From the city’s central mosque to the federal secretariat, the throng marched and chanted, calling for the release of their leader, Sheikh Ibrahim Zakzaky, a Shia cleric.

For the past eight months, Zakzaky and his wife have been held at an undisclosed location in what the Nigerian Department of State Security Services refers to as “protective custody”.

Zakzaky was arrested in December 2015, during a three-day encounter in which the Nigerian army stands accused of killing hundreds of members of the Movement in the northern city of Zaria in the state of Kaduna. The IMN calls it a massacre.

READ MORE: One year ago, Buhari promised to change Nigeria

“They are calling it a clash,” says Musa Bangi, a 66-year-old retired civil servant and follower of Zakzaky. “How is it a clash when it was mostly our members who were killed?”

Abdullah Mohammed is a follower of Zakzaky and a recent chemical engineering graduate. He says: “I was in Zakzaky’s house by the gate when they came to attack us on December 12, 2015. A soldier at the gate told me, ‘There is God. This order came from above.’ Even he did not understand why they were told to kill us. He was just following an order. An 18-month-old baby in the house was shot in the stomach.”

Human Rights Watch, Amnesty International and the Iranian government have condemned the killings.

While the IMN says that about 1,000 of their members were killed, a commission set up by the government of Kaduna state reported that the Nigerian army had used “excessive force” and killed 348 members of the Movement, who they then buried in mass graves [PDF].

‘They will block the road in the name of religion’

IMN members had allegedly blocked a major road in Zaria to conduct a flag-hoisting religious ceremony. A military convoy carrying an army chief, Lieutenant-General Tukur Buratai, was unable to pass by. The Nigerian army insisted that the Movement was trying to assassinate the army chief.

Buratai later told journalists that God had helped him to escape.

The group’s infamous road blockades during their processions have often put them at odds with local communities and travellers. Thousands gather on the streets for the pilgrimage to the group’s headquarters.

“They will block the road in the name of religion,” says Godwin Amaana, a 30-year-old taxi driver in Abuja. “I was going to Kaduna with a client and we were forced to stand still in the car for a whole two hours while these Shias blocked the entire road for their religious programme. It’s nonsense.”

But IMN members say there has been a misunderstanding.

“We have never blocked any road in Nigeria. There is always room for people to pass,” says Mohammed.

READ MORE: Through my eyes … Sunday mornings in Nigeria

Today, Zakzaky’s followers say that even his relatives do not know where he is. They say his health is failing and that he needs immediate medical attention.

“As my father is systematically and slowly being reduced to total blindness, I am becoming desperate,” says Zakzaky’s 30-year-old son, Mohammed Ibrahim Zakzaky.

In a pamphlet distributed at this week’s march, Zakzaky says his father has been “injured, physically, emotionally and worst of all, deprived of even the most basic of human rights”.

Zakzaky has led the IMN, the largest group of the country’s minority Shia Muslims, for more than 30 years. He remains a controversial figure, whose name arouses strong opinions among Nigerians from all walks of life.

His followers say the Movement has five to 10 million members.

Shrouded in mystery, Zakzaky is usually heard but not seen, unless in photos where he is either wearing white robes, a turban and green scarves draped around his neck, or is lying on the ground covered in blood. Zakzaky has been shot, beaten and jailed for at least nine years in different prisons across Nigeria.

“They want to kill me. I will show them that I have God. That is what the Sheikh says,” Mohammed explains.

Zakzaky’s followers say he is misunderstood and a man of peace. But successive Nigerian governments say otherwise.

In 2014, IMN members who were protesting against Israeli attacks on Gaza and observing a religious holiday clashed with Nigerian soldiers.

READ MORE: The life and death of a Boko Haram victim

The defence spokesman, Major-General Chris Olukolade, accused the Movement of creating traffic and firing at the soldiers. He says the soldiers returned fire.

“Soldiers opened fire on our people at Kuban bridge, killing 30 of our people, among which were three of my sons,” Zakzaky said in a statement. He accused the government of ordering the attack.

The December 2015 attack left another three of his children dead. Now just three are still alive.

Local journalists, politicians and security officials have compared IMN to the armed Sunni group Boko Haram. It is commonly alleged that Zakzaky supported Boko Haram during the group’s early years, although Zakzaky has denounced it in several speeches.

Another popular belief is that Zakzaky has either already created a parallel state or intends to do so. A flurry of rumours alleged that the flag hoisted on December 12 was an Iranian one. Others claim it depicted the face of Zakzaky as the leader of some sort of Shia kingdom.

But the IMN’s spokesman, Ibrahim Musa, laughs at these claims.

“The flag is actually the same very flag that is at the gravesite of the grandson of the Prophet Muhammad. That gravesite is a mausoleum in Mashhad, Iran. The flag symbolises the green for peace,” Musa explains. “The flag is routinely changed and it is given to a worthy cleric. So this time it was given to Sheikh Zakzaky.

“The importance of the flag is that we believe we will receive blessing because that is the flag at the burial site of the grandson of Prophet Muhammad, Imam Al-Ridha. It is not the Iranian flag and this is what I have been telling people.”

Nevertheless, the Movement has been criticised.

“Considering the nature and the organisational structure of the IMN, where the leader has the total control of the members, Sheikh Ibrahim El-Zakzaky should be personally held responsible for all the acts of commission and omission of the entire membership of the Islamic Movement in Nigeria in its clashes with the Nigerian army for refusing to call his members to order when required to do so,” declared the commission that investigated the December killings [PDF].

It also accused Zakzaky of radicalising his followers and encouraging them to defy the Nigerian government.

A common sentiment expressed in everyday conversation in Nigeria is that Zakzaky’s followers are “troublemakers”.

One columnist described the group as having a “romance with violence and occasional lawlessness”.

Zakzaky was an economics student at Ahmadu Bello University in Zaria in the late 1970s. He became a leader in the Muslim Student Society, which called for Sharia to be included in the Nigerian constitution.

As a young man, he followed the news of the revolution in Iran under the leadership of Ayatollah Khomeini, and later visited the country.

A polyglot who is said to speak at least five languages including Hausa, Persian, Spanish and Arabic, Zakzaky walks with a cane – a result of injuries inflicted during his stints in prison – flanked by security guards.

He colours his speeches with exaltations of the virtues of Islam, accuses the United States of instigating discord between Muslims, repeatedly denounces the evils of corruption and says justice must be fought for around the world.

In the eyes of his followers, Zakzaky is a leader calling for justice. Here, some share their views on their leader:

Abubakar Zaki, Quranic teacher – ‘The Movement is for everyone’

“I joined the Movement in 1986 … Back then, the [Nigerian government] would even send boys to attack us. The tension is not between us and the Sunnis. Or us and the Christians. It is between us and those who hate the truth. The Islamic Movement of Nigeria is for everyone who wants the truth. It’s for anyone, Sunni or even Christians. We have a Christian forum. We have Christians who are members of the Movement. Sheikh Zakzaky is trying to unite everybody. Sheikh is very powerful. He has many followers.

People say we don’t respect the Nigerian government, but then how is it that we are sending our children to government schools? Most of the children here are going to Western education and then in the evening time like this, they do their religious studies.

Once you stand on the truth, you face challenges …

Hafsat Husseini, 14 – ‘Sheikh Zakzaky has made my life beautiful’

The Nigerian government does not like the Islamic Movement. They are targeting us. Sometimes, I fear. I don’t feel safe. Like yesterday when we were out protesting for the release of Sheikh, the way the police were shouting at us was not good.

I would want a Shia to become president of Nigeria.”

Adamu Salisu, businessman and local politician – ‘I saw what was happening among politicians and I was disgusted’

I heard Sheikh Zakzaky and he speaks against stealing, corruption, and everything he mentioned is found in Nigeria. So I removed myself from politics. I saw what was happening among politicians and I was disgusted. The corruption was of the highest order. I still play politics, but I know my limits.

I joined IMN in 2012, but I had been researching IMN’s teaching for six years.

People are saying we are violent but look at what happened in 2014 and 2015. How many of our people were killed and how many Nigerian soldiers were killed?”

Abdullah Mohammed, chemical engineering graduate from the University of Abuja – ‘Zakzaky is against tyranny’

“Nigeria is a tyrannical government. You see, so many university graduates like me, do not have jobs. We pass through university and there’s no job. People are suffering. President Buhari stopped the importation of rice into the country and there is not enough rice in the market. That is tyranny. The Nigerian government is against Zakzaky because Zakzaky is against tyranny.

Ayatollah Khomeini spoke against tyranny. Khomeini is an inspiration to all of humanity. President Buhari said he is worried about Iranian revolutionary ideology in Africa. He is just trying to justify what happened to our people in December 2015.

Zakzaky warns us against committing violence, especially during election periods because he said that is what the politicians want, violence. He told us that we should not fight the Christians because Christians are the minority in the north and we should be at peace with them.

Spiritually, Sheikh Zakzaky is someone who relies on his God. Even when the army killed his three sons in 2014, Zakzaky was calm. I was there at the funeral. He was telling us to remain calm.

The Nigerian army have shot him so many times. But he is still alive. It is God who is protecting him.”

The post Sheikh Zakzaky: Through the eyes of his followers appeared first on African Media Agency.

COVID-19: Why We Must Reset Our Thinking