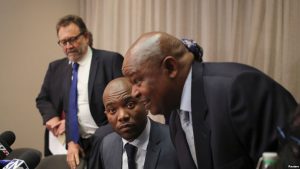 Leader of South Africa’s Democratic Alliance (DA) Mmusi Maimane looks on next to Congress of the People (COPE) leader Mosiuoa Lekota, ahead of a media briefing in Sandton, South Africa August 17,2016.

A mayor from South Africa’s main opposition party took office in a major urban centre on Thursday, unseating the African National Congress (ANC) as the ruling party paid the price for its worst countrywide election result since apartheid ended.

Underlining its political credentials by rallying smaller parties to form a coalition, the Democratic Alliance (DA) took over Nelson Mandela Bay municipality to end 22 years of uninterrupted control by the ANC.

Named after the global icon who became the country’s first black president after white-minority rule ended in 1994, the municipality includes the manufacturing hub of Port Elizabeth.

In the Aug. 3 municipal elections the ANC lost its majority there, as well as in other major metropolitan centers including the financial hub of Johannesburg, and Tshwane, which incorporates the capital Pretoria.

The DA’s control of Mandela Bay adds a second major city to its ranks, having run Cape Town municipality – where South Africa’s parliament is situated – since 2006.

“Beyond our reputation in opposition, we have also developed a reputation in government… we have shown the people of South Africa that where we govern, we govern well,” Trollip said.

Several ANC council members booed and walked out as Trollip donned the mayoral chain to wild cheers from his supporters. Mongameli Bobani, a black member of a smaller opposition party – the United Democratic Movement – was elected deputy mayor.

There was no immediate comment from ANC spokespeople on events in Mandela Bay, where the party won 41 percent of the vote against the DA’s 47 percent.

Nationwide the ANC polled more votes than any other party, and still hopes to be able to govern at the head of the coalitions in Tshwane and Johannesburg.

The DA, which has a largely white voter base, has similar ambitions.

Some analysts say the local administrations with slim majorities may be hampered by political wrangling, while others expect closer scrutiny on budgets by rival parties that may help fight corruption.