NAIROBI, Kenya (AP) — The soldier pointed his AK-47 at the female aid worker and gave her a choice.

“Either you have sex with me, or we make every man here rape you and then we shoot you in the head,” she remembers him saying.

She didn’t really have a choice. By the end of the evening, she had been raped by 15 South Sudanese soldiers.

On July 11, South Sudanese troops, fresh from winning a battle in the capital, Juba, over opposition forces, went on a nearly four-hour rampage through a residential compound popular with foreigners, in one of the worst targeted attacks on aid workers in South Sudan’s three-year civil war. They shot dead a local journalist while forcing the foreigners to watch, raped several foreign women, singled out Americans, beat and robbed people and carried out mock executions, several witnesses told The Associated Press.

For hours throughout the assault, the U.N. peacekeeping force stationed less than a mile away refused to respond to desperate calls for help. Neither did embassies, including the U.S. Embassy.

The Associated Press interviewed by phone eight survivors, both male and female, including three who said they were raped. The other five said they were beaten; one was shot. Most insisted on anonymity for their safety or to protect their organizations still operating in South Sudan.

The accounts highlight, in raw detail, the failure of the U.N. peacekeeping force to uphold its core mandate of protecting civilians, notably those just a few minutes’ drive away. The Associated Press previously reported that U.N. peacekeepers in Juba did not stop the rapes of local women by soldiers outside the U.N.’s main camp last month.

The attack on the Terrain hotel complex shows the hostility toward foreigners and aid workers by troops under the command of South Sudan’s President Salva Kiir, who has been fighting supporters of rebel leader Riek Machar since civil war erupted in December 2013. Both sides have been accused of abuses. The U.N. recently passed a U.S.-sponsored resolution to send more peacekeeping troops to protect civilians.

Army spokesman Lul Ruai did not deny the attack at the Terrain but said it was premature to conclude the army was responsible. “Everyone is armed, and everyone has access to uniforms and we have people from other organized forces, but it was definitely done by people of South Sudan and by armed people of Juba,” he said.

A report on the incident compiled by the Terrain’s owner at Ruai’s request, seen by the AP, alleges the rapes of at least five women, torture, mock executions, beatings and looting. An unknown number of South Sudanese women were also assaulted.

The attack came just as people in Juba were thinking the worst was over.

Three days earlier, gunfire had erupted outside the presidential compound between armed supporters of the two sides in South Sudan’s civil war, at the time pushed together under an uneasy peace deal. The violence quickly spread across the city.

Throughout the weekend, bullets whizzed through the Terrain compound, a sprawling complex with a pool, squash court and a bar patronized by expats and South Sudanese elites. It is also in the shadow of the U.N.’s largest camp in Juba.

By Monday, the government had nearly defeated the forces under Machar, who fled the city. As both sides prepared to call for a cease-fire, some residents of the Terrain started to relax.

What was thought to be celebratory gunfire was heard. And then the soldiers arrived. A Terrain staffer from Uganda said he saw between 80 and 100 men pour into the compound after breaking open the gate with gunshots and tire irons. The Terrain’s security guards were armed only with shotguns and were vastly outnumbered. The soldiers then went to door to door, taking money, phones, laptops and car keys.

“They were very excited, very drunk, under the influence of something, almost a mad state, walking around shooting off rounds inside the rooms,” one American said.

One man wore a blue police uniform, but the rest wore camouflage, the American said. Many had shoulder patches with the face of a tiger, the insignia worn by the president’s personal guard.

For about an hour, soldiers beat the American with belts and the butts of their guns and accused him of hiding rebels. They fired bullets at his feet and close to his head. Eventually, one soldier who appeared to be in charge told him to leave the compound. Soldiers at the gate looked at his U.S. passport and handed it back, with instructions. 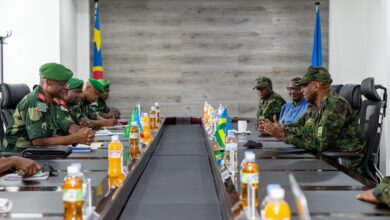