The International Republican Institute (IRI) and the National Democratic Institute (NDI) deployed an international delegation to Ghana from August 8 – 12, 2016. The purpose of the mission was to assess preparations for the 2016 presidential and parliamentary elections and support Ghana’s efforts to conduct peaceful and credible polls.

The delegation met with the chair of the Electoral Commission (EC), presidential candidates, political party leaders, civil society representatives, women leaders, journalists, election security officials, representatives of the international community, and several eminent persons and elder statesmen. This statement provides an overview of the delegation’s findings. The full statement will be released in the coming days. The delegation conducted its activities in conformity with international standards as reflected in the 2005 Declaration of Principles for International Election Observation. The delegation expresses its deepest appreciation to everyone with whom it met for welcoming the mission and for sharing freely their views on the electoral process.

Overview of the electoral context 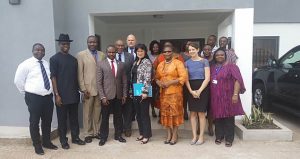 The delegation applauds Ghana’s distinction as a beacon of democratic development in Africa, a distinction for which its people are extremely proud. Pillars of Ghana’s democratization efforts include the country’s success in conducting multiple national polls since the country’s return to civilian rule and the emergence of the Fourth Republic in 1992, and its strong and independent institutions.

As in previous elections, Ghanaians expect the December 2016 polls to be closely contested between the country’s two leading political parties – the National Democratic Congress (NDC) and the New Patriotic Party (NPP). The delegation observed that the perceived high stakes of the election by some party activists have contributed to an increasingly polarized political environment and heightened tensions.

Parties on both sides of the political divide consistently asserted that the credibility of the elections hinges on the impartial conduct of the poll. Confidence in the EC was shaken by protracted litigation over the outcome of the 2012 polls. In the early part of the year, as the EC came under criticism and was pulled to court over the voter register, the credibility of the process came under scrutiny, which raised tensions. The EC has taken concrete steps to increase confidence in the electoral process through enhanced transparency measures and consensus building. However, some party leaders continue to question the adequacy of these actions. In addition, public understanding of these steps remains low.

The delegation noted considerable concern among Ghanaians over the spread of misinformation and the use of inflammatory language and hate speech in the media that escalates tensions and distracts from the policy issues important to citizens.

The delegation heard concerns about recent instances of election-related violence, the proliferation of illegal arms and the emergence of vigilante groups aligned with political parties. The National Election Security Task Force (NESTF) has outlined measures to mitigate these risks at the national, regional and district levels and ensure election security. The NESTF will continue to take actions that build public and stakeholder confidence in their professionalism and impartiality.

Women leaders across the political spectrum, noted with deep concern the very low representation of women in public and political life. Women hold only ten percent of parliamentary seats, and political parties have yet to meet their internal targets for fielding women candidates. Political party leaders acknowledge their shortcomings in this area.

The delegation appreciates the contribution of Ghanaian institutions and organizations that are promoting citizen participation in the election process and encouraging issue-based political discourse. Significantly, groups including the Coalition for Domestic Election Observers (CODEO) and the West African Network for Peacebuilding (WANEP), plan to monitor and observe the election process. Their efforts aim to enhance the credibility and peacefulness of the process by deterring and detecting irregularities and identifying early warning signs of violence. The National Peace Council (NPC) plans to substantially contribute to dialogue between political actors and encourage a peaceful election, including through its efforts to advance a political party code of conduct.

In the spirit of international cooperation, and taking into consideration the pride that all Ghanaians take in the strength of their democratic traditions, the delegation offers the following recommendations:

The delegation calls on Ghanaian leaders across the political spectrum, heads of institutions, civic leaders, the media, religious leaders and the population at large to consider the upcoming December 2016 polls as a historic moment to consolidate further peace and democracy, and preserve the highest interests of the country.