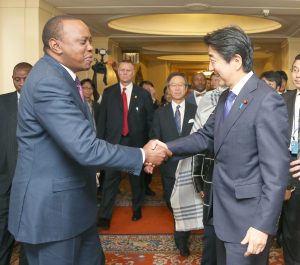 On August 27th and 28th, Japan will co-host the Sixth Tokyo International Conference for African Development (TICAD VI) in Nairobi, together with Kenya and major international organizations. TICAD VI represents the latest milestone in Japan’s deep and longstanding commitment to Africa.

Following TICAD V held in Yokohama three years ago, this year’s TICAD VI will be held for the first time on African soil, really historic.

When do you guess Japan started its cooperation with Africa? Some may assume in the 1970s, when the Japanese economy achieved full postwar recovery? No. Then around the 1960s, when many African nations gained independence? Not really. It was in 1927, almost 90 years ago. That was when Dr. Hideyo Noguchi, a Japanese physician who dedicated his life to the cause of medicine, departed for Accra in Ghana, pledging “I shall not return home without achieving my objective.”

Dr. Noguchi tasked himself with finding a cure for yellow fever, a disease that was causing hundreds of thousands of deaths in Africa. He did so despite partial impairment to his hand resulting from burns he had suffered in his childhood. Dr. Noguchi himself eventually succumbed to yellow fever, which cost him his life a year after moving to Accra.

“For the people of Africa.” This firmly remains the guiding principle of our engagement with Africa and drives Japan’s involvement in TICAD.

Africa’s growth not only benefits Africa, but the world as a whole. Under this belief, Japanese government and businesses, as well as individual citizens, have all made contributions to the development of Africa.

Exactly 50 years ago, three young men, Mr. Hideo Rikitake, Mr. Takeshi Inada, and Mr. Goro Furuya, became the first volunteers to go to Africa as Japan Overseas Cooperation Volunteers. They were tasked with the transfer of technology for electrical facilities and construction machinery to Kenya. These pioneering spirits were only the first of many. Since then, more than 15,000 Japanese young people in 31 countries across Africa have committed their time and skills under this program.

Our approach is to help African nations cultivate industries and to focus on each individual in Africa. This is why our economic development initiatives have initially focused on agriculture and light industries that are closely tied to people’s lives. These are the areas where the technology required is relatively easy to acquire and simultaneously result in products that directly improve the wellbeing of individual Africans. In short, we support the formation of “homegrown industries.” They will put Africa on a path to sustainable prosperity and self-sufficient growth.

Typically, African countries with abundant natural resources experience rapid economic growth when commodity prices are high, but this does not necessarily last. A downturn in prices negatively affects Africans by depressing wages. And sometimes this happens very quickly. The pace of development is therefore at the mercy of price movements in volatile commodities markets.

This is why I believe in the formation of “homegrown industries” throughout Africa.

To achieve the development of “homegrown industries” in Africa, building human resource capacity is vital. In Ethiopia, people are embracing the Japanese KAIZEN initiative that empowers all the workers to continuously improve their current working methods to increase productivity. The Toyota Kenya Academy equips African trainees with expertise in car maintenance, construction equipment and agricultural machinery. The Kenya Nut Company, launched by a Japanese entrepreneur, has developed into a world-class supplier of nuts with its popular “Out of Africa” brand. And in Tanzania, Japan’s Sumitomo Chemical transferred production technology for Japanese-style mosquito nets, creating a local mosquito net industry and contributing to the prevention of malarial infection.

At TICAD V in 2013, I announced the African Business Education (ABE) Initiative for Youth to emphasize our commitment to human resources development. The initiative invites young Africans from across the continent to Japan in order for them to receive master’s degrees at universities and participate in internships to groom future business leaders. African young people studying under this program will soon hit 1,000.

As Africa’s human resources expand, our relationship with Africa continues to deepen with the public and private sectors working hand in hand. Going beyond a sell-and-buy relationship, we help African businesses develop by providing investment and technology as well as expertise in production processes.

Japan’s businesses and universities are at the forefront of these efforts. In fact, a business mission with 77 leaders from Japanese businesses and universities will accompany me to Nairobi this time. More than 200 companies will also come to Nairobi to participate in a wide range of events, and as many as 72 MOUs with African nations are set to be signed. At TICAD VI, I will establish the Japan-Africa Public and Private Economic Forum, bringing together top business leaders from Japan and all over Africa to deepen economic ties.

We will provide US$ 200 billion in investment funds for infrastructure that will be highly sustainable and remain cost-competitive factoring in maintenance and repair over the mid- to long-term. These funds will further boost economic development in Africa.

Let me return to healthcare, another important cause in Africa. The deep conviction that drove Dr. Noguchi 90 years ago continues to be a source of inspiration in Japan today.

Dr. Satoshi Omura, who received the Nobel Prize last year, developed Avermectin, a therapeutic drug for endemic diseases caused by parasitic worms. The medicine has been provided for free to countries in Africa, in cooperation with Merck & Co., saving 300 million people each year from blindness. During the Ebola virus outbreak, Japan also provided financial assistance for Guinea, Liberia and Sierra Leone, dispatching experts and delivering medicine and medical equipment, as part of a $184 million assistance package. Additionally, we are supplying diagnostic equipment and mobile testing units for cancers affecting women.

This year, Japan unveiled a new vision to advance global healthcare. We will promote Universal Health Coverage to prevent and prepare for public health crises in Africa and across the world, and enhance emergency response capabilities. To support this drive, I announced an assistance package of $1.1 billion for the health sector.

Africa’s enormous potential is fast becoming a reality. The African continent is now home to 1.2 billion people, and its economy is growing at a higher rate than the global average. I believe there can be no global development without African development. We are fully committed to our partnership with Africa. I very much look forward to renewing my friendship with African leaders again and advancing our collective efforts at TICAD VI in Nairobi.

* Source Huffpost. Author is the 96th Prime Minister of Japan, President of the Liberal Democratic Party