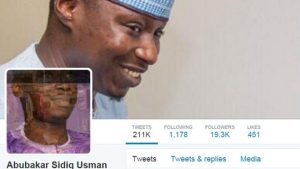 A prominent news blogger in Nigeria has been freed on bail following his arrest on Monday for “offences bordering on cyber-stalking”.

Abubakar Sidiq Usman’s arrest by the anti-corruption agency, the Economic and Financial Crimes Commission (EFCC), was widely condemned in Nigeria.

Mr Magu has not yet commented on the allegation.

An EFCC spokesman confirmed to the BBC that Mr Usman had been released on bail.

Mr Usman was grateful to Nigerians for speaking out against his detention of more than 36 hours, his lawyer Michael Bello told the local Premium Times newspaper.

His bail conditions required him to “make himself available to the EFCC whenever he received an invitation”.

Mr Usman is an extremely popular blogger and a strong backer of President Muhammadu Buhari.

He is also a founding member of the youth wing of the governing All Progressives Congress (APC).

In a statement posted on its Facebook account after he was detained, the APC youth wing said he was being held on “spurious charges”.

The EFCC was formed to investigate financial crimes and had overstepped its jurisdiction by detaining him, it said.

Mr Usman is the third blogger to be arrested in Nigeria since the Cyber Crime Act came into force in 2015, the Premium Times reported.

Zambia's voices on the elections and their future hopes