Over the years, it has been identified in countless studies that one of the core reasons Nigeria has failed to develop to its full potential is pervasive corruption. 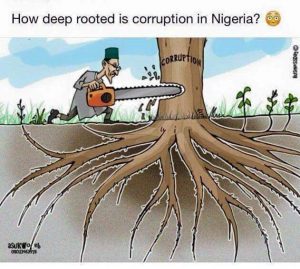 Corruption, it is said, runs through the entire gamut of the country’s life such that many official enquiries and probes have exposed widespread monumental fraud, bribery, embezzlement, rent seeking and kickbacks across the public and private sectors.

It can’t be emphasised enough that funds which ought to have gone into building infrastructure and generally improving the lives of the people invariably end up in the pockets of some people. The result is that healthcare, education, food security, human security, job creation and other areas where funds are needed to make life meaningful to the people are severely neglected. Why? The monies budgeted for these sectors over the years are spirited away by a few heartless crooks.

Today, all over the country evidence of this willful theft and unconscionable looting of public funds can be seen in the appalling healthcare delivery system, deplorable facilities in educational institutions, avoidable food importation, massive youth unemployment, dreadful state and federal roads, as well as shockingly ill-equipped armed forces, police and other security outfits.

Even the emergence of violent extremism in the North-east, militant agitations in the Niger Delta and the serial abysmal performance of Nigeria’s athletes in the Olympic Games cannot be attributed to anything other than corruption.

In the words of Eghosa Osagie, professor of comparative politics and Vice Chancellor of Igbinedion University, Okada, “It is easy to see how corruption breeds on the ownership of the state on the one hand, and the weak bonds and structures of accountability on the other.” According to him, corruption does not symbolize privatization of public office for private gain, embezzlement and other negative pecuniary transactions that deprive society of much needed resources only. It also includes the manipulation and subversion of institutions, rules regulations, procedures and laws which he said is mostly evident in the flawed electoral process.

Indeed the damage corruption inflicts on society is huge, costing the global economy some $2.6trn annually, according to John Kerry, US Secretary of States during his recent visit to Nigeria. From all indications, going by the manner corruption has torn through its fabric, Nigeria no doubt would be one of the countries contributing a large percentage to the global scam.

Mindful of the havoc it continues to wreak on nations, Kerry describes corruption as not just a disgrace and a crime, but also dangerous. He praised President Muhammadu Buhari for confronting the monster frontally and pledged continual support in that regard. From the way the war is being conducted, he surmised that Nigeria could in fact be a model to other nations. 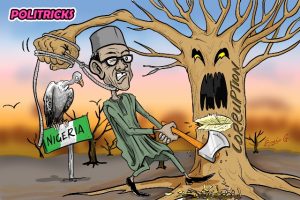 And truly since assuming office May 29, 2015, Buhari has lived up to his campaign promise of tackling corruption headlong and providing a fresh template for instilling transparency and accountability. On the matter of corruption, credit goes to him for he indeed hit the ground running. Seeing the way the screw has been turned on treasury looters and the big thieves in the society, all those harbouring the belief that there are ‘untouchables’ who would never be called to give account are now beginning to have a rethink.

The message is now out there that under this administration, it would no longer be ‘business as usual.’ But the fight should also not be conducted in a manner that leaves the impression that Buhari as the general of this war has no army behind him. It cannot be denied that at the federal level the battle is raging, but it has to percolate to the state and local government levels for it to register the desired impact. Governors, especially those of the ruling party, must take a cue from Buhari in the quest for zero tolerance for corruption.

But by far the greatest army in this all-important assignment is the now rejuvenated Economic and Financial Crimes Commission (EFCC). The institution has so far demonstrated not just the courage, but also the will and the focus to ensure that corruption is reduced to the barest minimum in the country.

The Acting Chairman of EFCC, Ibrahim Magu, has not betrayed the image of him that was awash in the media when his name was announced as the new anti-corruption czar, in November last year. Magu was said to be the squirrel teeth that cracked many cases leading to the conviction of some treasury looters during the tenure of the first chairman of that agency, Mallam Nuhu Ribau. He was described as more ruthless in the anti-graft war front than even his famed former boss, Nuhu Ribadu. The man is proving to us that all that was true, and even more!

Going by the accolades and international respect his work has earned Nigeria from all over the world, Magu is indeed a patriot that should be encouraged.

Rising up to the rots of corruption and challenging the powerful cabals in the temple of graft is no mean task. It is not for the lily-livered nor is it for one with moral deficit.

Under Magu’s stewardship, and with the full support of President Buhari, EFCC has regained its biting teeth by tackling cases of monumental fraud. Several billions of naira have been recovered from looters and many of them have been dragged to courts.

Considering all these, by the time Magu’s appointment is confirmed by the Senate, it is expected that the anti-corruption war would be more invigorated and the EFCC more emboldened in its quest to rein in the monster of corruption and the merciless parasites that have been sucking on our collective patrimony.

*Onyeacholem is a journalist. He can be reached on gonyeacholem@gmail.com