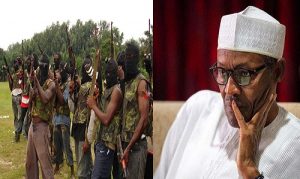 A militant group in Nigeria’s oil-rich Niger Delta region has said it will uphold a ceasefire and is willing to enter into negotiations with the government after several false starts.

The Niger Delta Avengers (NDA) has spearheaded a campaign of attacks on oil pipelines and facilities in the southern swampland region in 2016, cutting Nigeria’s oil production by hundreds of thousands of barrels and forcing international oil companies to temporarily suspend operations at various times.

The group has previously rejected the government’s offers of negotiations and claims to be fighting for a greater share of Nigeria’s oil wealth for the people of the Niger Delta, an impoverished region. Oil accounts for around 70 percent of Nigeria’s national wealth and more than 90 percent of the value of its exports.

In a statement released on Saturday, the NDA said that it would support negotiations “with the federal government of Nigeria, representatives from the home countries of all multinational oil corporations and neural international mediators” in a bid to de-escalate the conflict in the Niger Delta.

The group stated that it would only support a negotiating team headed up by Edwin Clark, a prominent leader of the Ijaw ethnic group that is prominent in southern Nigeria.

The NDA also stated it would “continue the observation of our unannounced cessation of hostilities” against the interests of oil companies in the Niger Delta, but that it would “continuously adopt our asymmetric warfare” if Nigerian security forces attempted to arrest or harass its members.

MEND is negotiating with President Muhammadu Buhari’s administration over the current crisis.The group said that Clark was unsuitable to lead talks between militant groups and the government and that it backed the Nigerian military’s ongoing presence in the Delta.

Timi Frank: A Disaster From Long Ago