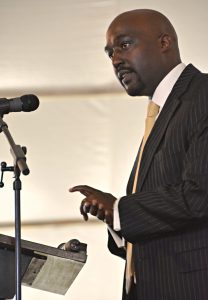 The Rockefeller Foundation has awarded Kenyan economist, Dr Andrew Mude the 2016 Norman Borlang award for field research and application for his outstanding work in developing insurance for never before insured communities whose livelihoods depend on herding cattle, goats, sheep and camels in the remote, arid and drought-prone lowlands of the horn of Africa.

According to Nicole Barreca, Director of Communications and Events for the World Food Prize, Dr Mude has made novel use of satellite data to achieve an innovative and highly effective solution that helps pastoral livestock herders reduce the considerable and costly drought-risk they face in the horn of Africa region.

The announcement of the award for individuals under the age of 40 was made at an event hosted by the International Livestock Research (ILRI) in Nairobi, Kenya by Ambassador Kenneth Quinn, President of the World Food Prize, headquartered in Des Moines, Iowa. Dr Charity Mutegi, also from Kenya received the award in 2013.

It is also reported that Dr Mude will be formally presented with US$10 000 on October 12, 2016 in Iowa, USA, as part of the 2016 World Food Prize international symposium.

Mude is a 39 year old Kenyan native who received his PhD from Cornell University and is principal economist at the International Livestock Research Institute. He spearheads a programme called Index Based Livestock Insurance (IBLI), which is reported to be greatly reducing the vulnerability of East Africa’s livestock herding families to recurring droughts, which kill great numbers of livestock, sending many hungry households in remote regions into deep and lasting poverty.

Since launching IBLI in 2008, Mude and his team have engaged local herders and leaders in building and delivering extension education programmes, employing videos, cartoons and radio broadcasts to increase understanding of the principles and coverage of the insurance plans.

The World Food Prize reports that before Mude’s innovative approach was implemented, African herders had no access to livestock insurance. It was highly impractical and costly for insurance claim adjusters to travel through East Africa to confirm dead animals and pay claims.

IBLI eliminates the need for such visual confirmation of stock losses by using satellite data to monitor grazing conditions. When these conditions  are seen to fall below a certain threshold, the data serves as a proxy for dead animals and insurance payouts are made.

In future, more than 50 million pastoralists across Africa are expected to have an opportunity to benefit from the financial technology. 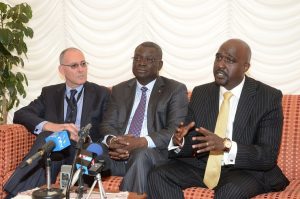 Mamadou Biteye, Managing Director of the Rockefeller Foundation Africa Regional Office said with today’s changing climate, weather based insurance has become a critical tool in building the resilience of some of the world’s most vulnerable communities.

The Kenyan government is reported to have already provided 5 012 households with IBLI coverage and made indemnity payments to a few hundred herders in Kenya’s huge and arid northern county of Wajir, which has suffered prolonged drought.

In Ethiopia, Kenya’s neighbour to the north, a government pilot project spearheaded by Mude’s team is working to scale out the insurance programme while the World Food Prize programme is making IBLI-type insurance a key pillar of its food security strategy in Ethiopia’s pastoralist lowlands. Other governments and development agencies are reported to be seeking help in testing IBLI-type policies across West Africa’s Sahel and the drylands of southern Africa.

During his work at the Rockefeller Foundation, the late Dr Norman Borlang developed high yielding, disease resistant wheat in Mexico and introduced adaptable wheat varieties into India and Pakistan during the 1950s and 60s for which he received the Nobel Peace Prize in 1970.

The World Food Prize was created in 1986 by Nobel Peace Prize recipient Dr Norman Borlang. It is the foremost international award recognising individuals whose achievements have advanced human development by increasing the quality, quantity or availability of food in the world.