As Zambia gets ready to vote in a tight contest this Thursday, presidential challenger and UPND candidate Hakainde Hichilema puts forward his case for why the country needs a new government. 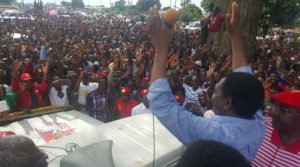 This Thursday, Zambia will head back to the polls. We have a proud democratic tradition that rightly and often places us among the pantheon of democratic standard-bearers in the region. Indeed, peaceful transfers of power and respect for the rule of law have long characterised politics in my country. This rich history is what inspired me to first run for elected office in 2006 and why I stand today as a presidential candidate.

In recent years, however, the political environment in Zambia has deteriorated to the point where electoral violence – previously unheard of in the country – has become commonplace, particularly now in the lead up to the 11 August polls. This reality is a terrible by-product of the practices of the ruling government that I am currently standing against.

The last round of elections took place not too long ago in January 2015, following the death of former President Michael Sata of the now-ruling Patriotic Front (PF). I narrowly lost that election – by 27,000 votes to be exact – to former defence minster Edgar Lungu. That election was widely criticised by observers, highlighting a number of concerns that persist to this day, including questions about the validity of the electoral register and the fact that potentially thousands of foreign nationals are illegally registered to vote. Nevertheless, I accepted the official outcome of that election, preferring peace and stability to the potential unrest that would ensue if I launched an official challenge. Furthermore, I knew I would once again have my opportunity when August 2016 rolled around. Now that that time is upon us, I genuinely fear for the future of my country.

Over the past year and a half, Zambia’s economy has noticeably stumbled. Under President Lungu’s stewardship, our national growth rate has fallen from 7% to 3%. Inflation has tripled, up from 7% in 2015 and now topping off at a staggering 22%. Unsurprisingly, our national currency, the kwacha, has also taken a severe blow, down from K7 to K11 against the American dollar. This toxic confluence of factors has placed an undue strain on citizens across Zambia, as well as on local businesses and outside investors. We have also suffered rising food prices, daily power cuts and massive job losses, particularly in the Copperbelt region – the industrial heart of Zambia – producing an untenable socioeconomic situation.

To be sure, Zambians across the country – regardless of political affiliation, region, gender, race or any other possible designation – should expect more and they deserve better. They deserve better from a political elite that has allowed runaway corruption to drive our economy into the ground. They deserve better from a president who has shied away from communicating meaningfully with the people during a time of economic turbulence, only giving two press conferences in the span of 18 months, which has undoubtedly increased feelings of uncertainty and a lack of confidence.

Zambians also deserve better from a governing class that is focused predominantly on improving their own standard of living, including awarding themselves hefty pay increases, at a time when job losses are high and the price of food skyrocketing. These same leaders rarely venture to the majority rural areas of our country to either listen or respond to citizens’ concerns. This is unacceptable.

The Patriotic Front and President Lungu recognise this reality as well. This is why they have engaged in underhanded tactics to manipulate the upcoming election in their favour, understanding full well that their popularity is not exactly hitting a high mark several weeks before we vote. Indeed, Zambia is now gaining some notoriety— not as a democratic standard-bearer, but rather as a country in which the ruling party seems intent to go to any length to unfairly tilt the playing field in its favour.

Aside from being labelled a “Satanist” by supporters of my opponent and the worrying rise of political violence, there has been a clampdown on the independent press, including the closure of our main independent newspaper and the prolonged persecution of its editor (a former PF supporter). Authorities have also routinely harassed journalists for reporting on sensitive political issues and for covering my campaign speeches and rallies — this has also included reported death threats against individual journalists.

I have also had campaign events deemed “unauthorised” at the last minute; meeting permits have either been denied or later revoked; and I have been refused travel to rural areas of the country by the Air Force. Taken together, these recurring instances amount to major violations of international law and customary norms, as well as the Southern African Development Community’s (SADC) Guidelines and Principles Governing Democratic Elections.

Despite these mounting challenges, however, I remain confident that Zambia has a bright future and an untapped potential. In order to help secure that more prosperous outcome, I unequivocally condemn and stand against the acts of violence happening in our country. I call on my supporters in particular to remain nonviolent and ask that my opponent do the same. For at the end of the day, we may disagree – substantively and emphatically – on policy issues and what is best for our country, but we can both surely agree that violence and other means with which to tarnish the upcoming election are unacceptable.

I also encourage our international allies to remain engaged and to keep a watchful eye on events, not hesitating to speak out should injustices arise. Most importantly, I firmly believe that together we can help place Zambia back on the regional pedestal that our predecessors courageously fought for and rightly earned.

*African Arguments.Hakainde Hichilema is president of the opposition United Party for National Development (UPND) and a candidate for president in Zambia. See hh-zambia.com for more information.