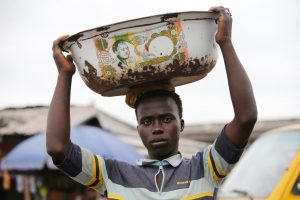 A man balances a bowl with a print of the old Nigerian naira banknote on his head at a local market in Agege district in Lagos, Nigeria on August 16, 2016. Since Nigeria’s central bank announced it would abandon its currency’s dollar peg, the naira has fallen 61 percent against the U.S. dollar. Photo by Akintunde Akinleye/Reuters

On June 15, Nigeria’s central bank announced it would abandon its currency’s dollar peg. Since then, the naira has fallen 61 percent against the U.S. dollar, generating difficulties for both foreign and domestic businesses in Africa’s most populous country. Nestle Nigeria, for instance, saw a 94 percent drop in profits as the currency depreciated. The currency’s move also led to Nigeria losing its title as Africa’s largest economy — a symbolic downgrade that succinctly summarizes the many challenges facing the country.

Perhaps the most disruptive development in the Nigerian economy over the past five years has been the drop in the price of oil, which accounts for 70 percent of government revenue and 95 percent of export income. As oil prices fell from more than $100 a barrel in June 2014 to under $50 today, government revenues plunged, leaving Nigeria with a $7 billion budget deficit.

Amidst the decline in oil revenue, the government’s prolonged peg of the currency to the dollar led to foreign exchange shortfalls and import barriers on items such as margarine, private jets, wooden doors and even toothpicks, significantly hurting both local and multinational businesses.

These measures drove United Airlines and Iberia Airlines to cut off routes to Nigeria. The measures also left domestic operators with painful fuel shortages. Business in other industries suffered as well, with companies like Nestle’s Nigerian operation struggling to access foreign exchange and the Africa president of Unilever calling the maintenance of the policies “very insane.”

Meanwhile, militants known as the Niger Delta Avengers have blown up pipelines, contributing to Nigeria’s loss of its title as Africa’s largest oil producer. Sabotage has cost the country 700,000 barrels per day, sending the country’s output down to its lowest level in almost three decades. Shell’s production in Nigeria dropped 24 percent between the first and second quarters of this year alone. The government has engaged the militants in peace talks (as well as paying them stipends), but analysts are not optimistic that peace is imminent.

In the north, the military continues to battle Boko Haram terrorists, whose violence has displaced 2.2 million people. At the same time, regional tensions have erupted elsewhere in the country, and land disputes have killed more people this year than Boko Haram.

Given this backdrop, it shouldn’t be a surprise that the economy is in tatters. Growth slowed from 6.3 percent in 2014 to 2.8 percent last year, and the IMF says the economy could shrink by 1.8 percent in 2016. In June, inflation rose to an 11-year high of 16.5 percent, while business confidence has hit all-time lows. The unemployment rate is over 12 percent, and major electricity companies are threatening to cut off power if the government does not pay them the hundreds of millions of dollars it owes.

If all that wasn’t enough, a moth ravaged the tomato crop in the northern Nigerian state of Kaduna, driving up the local price of a basket of tomatoes from as little as 300 naira to 42,000 naira — a 14,000 percent increase (and incidentally, sparking ill-will towards the decadent, annual tomato-throwing festival in Spain on social media). Locals called it “tomato Ebola,” and the regional government declared a state of emergency.

The slowing economy is particularly problematic for a country that is adding 13,000 new people to its population every day. By 2050, the country is expected to have roughly 400 million people, surpassing the U.S. and only trailing the populations of India and China. By 2100, that figure could near 1 billion. Population density will skyrocket as well, given the country’s land area is roughly equivalent to that of Texas. With a population growing at 2.7 percent per year, the economy needs to maintain that level of growth just to tread water, let alone improve the incomes of its citizens.

One impediment to growth has been corruption. Nigeria lies in the bottom 20 percent of nations on Transparency International’s Corruption Perceptions Index. Muhammadu Buhari, who was elected president with a mandate to crack down, seems to have made some progress. In June, the government announced it had seized more than $10 billion dollars’ worth of stolen wealth. But some are skeptical of this figure, noting only $600 million had actually been repatriated so far.

There are signs of hope for Nigeria’s economy. While painful, the plunge in the currency could be an opportunity for entrepreneurs and exporters who have costs in naira and revenues in foreign currencies. It might also help local industries as Nigerians substitute domestically produced goods for foreign imports.

Another bright spot is the development of Nigeria’s petroleum refining infrastructure. Today, the country produces more crude oil than it can process. Ironically, this means that even as Nigeria exports crude oil, it is dependent upon imports to meet domestic gasoline consumption demands.

Aliko Dangote, Africa’s richest man, is constructing a refinery that could “satisfy Nigeria’s daily requirement of 445,000 to 550,000 barrels of fuel, with spare capacity to export,” according to CNN. This could improve the country’s trade balance while making shortages induced by currency fluctuations less likely.

An expansion in access to information technology could also be a boon for business. This year, the price of data for the country’s nearly 100 million mobile internet users has plunged dramatically as the market was deregulated and competition grew. According to Quartz, the price of 500 megabytes fell 50 percent in a single month this spring — but it still needs to fall much farther to enable mass consumption.

Infrastructure investment will also drive growth. This June, a U.S. fund announced it would raise $2 billion to fund projects in the country — a drop in the bucket of Nigeria’s $300 billion infrastructure deficit, but nevertheless a positive sign of Nigeria’s potential to attract capital even amid turmoil. The state has also announced fiscal spending to offset the downturn.

So while pessimism abounds, it is crucial to keep our eyes on the bright spots in Nigeria’s economy. We write off and ignore the country at our own peril; it could very well become a 22nd century superpower. As the Nigerian businessman Tony Elumelu said, “Today we may appear young and people may not believe in us, but we are going to compel them to believe in us through our achievement.”