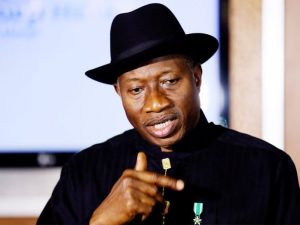 The coordinated attack on the integrity and credibility of former President Goodluck Jonathan is unfortunate. That the same hastily cooked up lies were reported simultaneously and almost word for word by The Nation, saharareporters.com, premiumtimesng.com and other known client media of the powers that be is evidence of the fact that someone powerful is out to get the former President.

Let us even consider the report in itself. One of the conjectures used by the propagators of this lie to pull the wool over the eyes of Nigerians is contained in this quote “It has been known in government circles that Jonathan may be behind the NDA. The speed with which he denied the allegation spoke volumes.”

There has never been such a childish and amateurish justification for sullying the hard earned peaceful reputation of a man like former President Jonathan as this.

When in November of 2012 Boko Haram named Major General Muhammadu Buhari (rtd), now the current President of Nigeria, as one of its chosen mediators did he not quickly and immediately deny and reject the nomination by Boko Haram?

Flowing from the same warped reasoning, his speedy denial is also evidence that he had a hand in the terrorism occasioned by the radical Islamic sect, but we know that is not true because Boko Haram tried to kill Mr. Buhari.

If it were that Dr. Jonathan did not quickly and completely deny any links with the Niger Delta Avengers and any other militants group, then the sponsors of this wishy washy story would have changed their tactics and would have said that his non denial is evidence of his complicity.

Another so called evidence used against the former President in this sponsored report is the fact that he called for peace and urged militants not to declare a republic or contemplate secession.

In the disturbed thinking of the sponsors of this report, this is evidence against Dr. Jonathan?
Has it occurred to these demented persons that this is precisely what a genuine statesman should do in times like these? In September of 2011, former President Olusegun Obasanjo visited Maiduguri to see the family of the late founder of Boko Haram, Mohammed Yusuf, in search of peace. He was applauded for such a courageous act, as he should have been, because that is what is expected of statesmen.

In other climes, they give people Nobel Peace Prizes for prevailing on belligerents to sheathe their swords, but apparently in Nigeria, it is evidence of your complicity. Should Nigerians be surprised then that passers by refuse to help those attacked by armed robbers or accident victims on the roadside like the Good Samaritan? If you do, the government may accuse you of being the perpetrator instead of the savior.

But these happenings are not surprising to me. We were all witnesses to the threat to withdraw the licenses of the two major fertilizer manufacturers in Nigeria, Notore Petrochemical and Indorama Eleme Petrochemical, for providing the materials used by terrorists and militants to make Improvised Explosive Devices (IEDs).
Now, according to this new tale inserted into the media, it was Dr. Jonathan who instructed militants to mine oil installations before the May 29th, 2015 handover date.

Now it is confirmed that liars do not have a good memory and so must contradict themselves. If the oil installations were rigged with mines the question to be asked is are mines made from fertilizers? Can they not get their story right?
There is a troubling pattern here. It seems that any time Dr. Jonathan is advancing on the world stage for his humanitarian and pro-democracy activities, these fallacious stories appear in the media to distract him.
When he was on his very successful international speaking tour earlier in the year, the lie was told that he was away on exile.

Now that he is back from his second successful outing as head of the African Union Elections Observation Mission to Zambia the usual suspects are up to their old tricks. Who knows what they would do next when they behold the great things that Dr. Jonathan is set to do very shortly?

In fact, the allegations against Lai Mohammed come with documentary evidence. We remember that he was alleged to have begged his subordinates at the National Broadcasting Commission (NBC) for a ‘loan’ of N13 million against civil service rules and against the rules of public decency.

Have those allegations gone away, Mr. Lai Mohammed? Should we then accept them as true? Of course not! Why? Because allegations, no matter how weighty, are not evidence.

Like I said before, I am ever proud of Dr. Goodluck Jonathan. Somebody asked me what I gained by working with Goodluck Jonathan. My response was that I learnt wisdom. I learnt that It is better to lose power and gain honor than to gain power and lose honor. I learnt not to defend myself when my enemies falsely accuse me. The same media that gleefully reported their lies will eventually expose them when they see that the public is no longer buying their lies.

Finally, I learnt that the best revenge against those who criticize how you do your job is to step aside and let them have the job and watch them underperform in such a manner until they get so desperate that the only achievements they can boast of are the ones you achieved during your so called underperformance. May God bless Dr. Jonathan for teaching me such wisdom! In Jesus name.

*Source Thisday.Omokri is the founder of the Mind of Christ Christian Center in California, author of Shunpiking: No Shortcuts to God and Why Jesus Wept and the host of Transformation with Reno Omokri