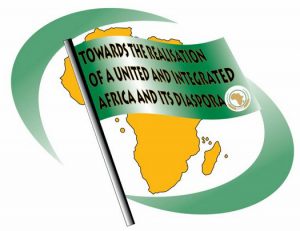 The building of a union of countries with varied interests, political structures, and cultural characteristics is a challenging endeavor. As seen in recent developments with the United Kingdom’s Brexit campaign from the European Union and similar movements in Europe, maintaining cohesion and adherence to supra-national entities is a messy affair. The African Union has similarly undergone continuously evolving processes of layered diplomacy to develop the union into a body that aims to speak for the shared interests and values of its member-states.

In the newest layer to come to light since the founding of the AU, a so-called Sixth Region was constructed to increase the participation of actors located outside of the continent. The 2003 Protocol on Amendments to the Constitutive Act sought to “invite and encourage the full participation of the African Diaspora as an important part of our Continent, in the building of the African Union.” This has taken the form of participation as either observers or delegates at AU summits and stakeholder meetings.

At the 2012 Global African Diaspora Summit, organizers released a declarationreiterating the relevance of the Sixth Region. The document placed an emphasis on the Diaspora, calling on its representatives to “organize themselves in regional networks and establish appropriate mechanisms that will enable their increasing participation in the affairs of the African Union as observers and eventually, in the future, as a sixth region of the continent that would contribute substantially to the implementation of policies and programs.”

Despite declarations of inclusion, the Sixth Region has yet to gain traction and relevance. The practicalities of involving the diaspora in the affairs of the AU have proven more problematic than originally envisioned. Efforts to include the Diaspora have taken the forms of the AU Department of Citizens and Diaspora Organization, seats in the Economic, Social and Cultural Council (ECOSOCC), and the creation of regional entities in North America, Europe, and Latin America. Yet, significant barriers to participation persist.

For example, the Economic, Social and Cultural Council (ECOSOCC) reserves seats for 20 members from the Sixth Region – and it is the only permanent AU organ with Diaspora representation. However, “in spite of the enthusiasm of the African Diaspora as reflected in the establishment of various Diaspora networks, the actualisation of their representation in ECOSOCC has remained evasive,” according to Francis N. Ikome, Director of the Multilateral Programme at the Institute for Global Dialogue.

In another shortfall noted by Kassim M. Khamis, a Political Analyst specializing in the African Union, “the five geographical regions under which the AU is operating are only practical during the AU organs sessions, in which the African Diaspora is not represented.” The current modus operandi of the Sixth Region represents a quandary in the operationalization of the involvement of actors outside of the continent.

The incorporation of special status and permanent member-states is one area where the AU has consistently drawn the line in terms of the participation of the Diaspora. This is due primarily to Article 29, paragraph 1 of the 2000 Constitutive Act of the AU, which limits membership to African countries. No other country challenges the current framework of the AU’s relationship with the Diaspora more than Haiti.

Despite Haiti’s expressed desire to become a permanent member-state of the AU, its proposal has been summarily declined, with the Union opting to classify the island nation as an observer and one of the many actors in the ambiguous Sixth Region. The inclusion of Haiti – either as an associate or full member-state – offers an opportunity to engage the Diaspora in a more substantial and practical basis than what has ever been seen previously in the existing organs of the AU. Haiti’s contested member-state status represents a missed opportunity to operationalize aspects of the AU decision-making processes intent on engaging the Diaspora.

The Sixth Region remains comprised of actors in multiple regions with competing agendas and disparate priorities; further challenging its ability to realistically participate in decision-making mechanisms of the AU. For the Diaspora to substantially contribute to the policy-making processes of the AU, more practical modalities on representation are needed to move beyond the largely symbolic roleof the diaspora in stakeholders’ summits and consultative meetings.

As the Africa Union continues to evolve as a major force in shaping geopolitics, its ability to engage with extra-continental interests will be challenged by the current structures, policies, and mechanisms that limit the representation of actors outside of the continent.

*Source Huffington Post.Michelle DeFreese is a consultant with the Institute for Multi-Track Diplomacy (IMTD) based in Tanzania. She completed her Master’s degree in International Relations at the Graduate Institute of International and Development Studies (IHEID) and is an Africa Fellow at Young Professionals in Foreign Policy.

Nigeria to resume payments to oil militants in Niger Delta