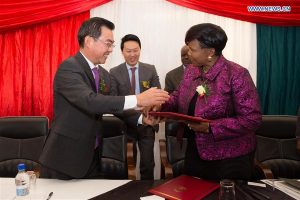 Zimbabwe’s meteorological services department has received state of
the art equipment valued to the tune of $2 million to enhance weather
and climate information dissemination services especially targeting
farmers and remote rural communities.
According to Oppah Muchinguri-Kashiri, Minister of Environment,
Water and Climate under which the meteorological services department
falls, Zimbabwe is one of the first few countries in Africa to receive
such kind of aid where equipment is installed, handed over and at the
same time commissioned.
Kashiri said that the equipment has been donated under the
China-Africa initiative to capacitate the under resourced
meteorological services department.
“The donation comes at a time when the demand for weather and
climate information has become unprecedented due to rapidly changing
weather and climate.Our weather has become more extreme, with dry
spells becoming droughts and rainy events turning into floods,”
Kashiri said.
The meteorological services department provides vital information
which farmers can use for agricultural planning. Kashiri said that the
information should be readily available at ward level and includes
information on rainfall patterns and early warning on floods.
Kashiri said that the equipment will enhance the quality of the
services being offered by the department.
Two automatic weather stations have been installed at the
Agriculture Extension Services department (AGRITEX) offices at Neshuro
growth point in Masvingo province and in Rushinga district of the
country.
She said that this demonstrates the close link between weather and
agriculture and the partnership between the meteorological services
department and the ministry of Agriculture.
Some of the equipment received by the department include a
polar-orbiting satellite receiving system which is reported to be the
first of its kind in Africa.The system is reported to receive its
images from a chinese satellite that is orbiting the earth from pole
to pole.
Other equipment include a weather virtual TV studio.The FY-3 polar
orbiting satellite receiving and processing system is an advanced
system that receives all weather and high precision data from polar
orbiting earth observation satellites for medium and long range
numerical weather forecasts, climatic prediction and natural disaster
monitoring for drought, fire,vegetation and water,150 automatic
weather stations, meteorological early warning radio system and 1 600
radios for rural communities and a Meteorological Information
Comprehensive Analysing and Processing System (MICAPS).