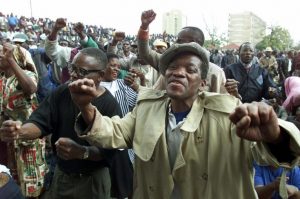 Zimbabwean war veterans sing revolutionary songs at a meeting at the ruling Zanu-PF.Reuters

HARARE (Reuters) – Zimbabwe’s government denounced leading independence war veterans as traitors on Saturday for an unprecedented attack on ageing President Robert Mugabe and vowed to identify its unnamed authors and put them on trial.

Veterans who fought against white minority rule in the former British colony turned on their long-time ally and commander on Thursday, calling him a dictator in a jolting rebuke highlighting political manoeuvring over his succession and mounting anger over economic woes.

State-owned newspapers reflected the power struggle on Saturday with a highly unusual 12-page supplement praising his wife Grace on her 51st birthday. War veterans have accused her of having too much influence over her 92-year-old husband.

“Government … dismisses the said traitorous so-called communique, which is treasonable in the constitutional democracy that Zimbabwe is,” Retired Brigadier-General Asher Tapfumaneyi, the most senior civil servant in the veterans ministry, said in a statement on Saturday.

“Multi-agency investigations are underway to establish its origins, authorship, ownership and purpose,” he said, adding the government would “bring all associated with it to justice”.

The Zimbabwe National Liberation War Veterans Association (ZNLWVA) issued its allegations of corruption and economic mismanagement by Mugabe in its own name, without individual signatures, after a seven-hour leadership meeting.

Tapfumaneyi expressed dismay at the statement and said the government was working to address most of their grievances by April 2017, a year before the next presidential election. Mugabe has ruled Zimbabwe since its independence in 1980.

“Any agitation or activism outside this very constructive process in the manner of this purported communique would therefore be misguided, treacherous and outright counterproductive,” he said, adding that some former fighters were distancing themselves from the ZNLWVA statement.

As Mugabe shows signs of frailty, senior members of the ruling ZANU-PF party are positioning themselves for the post-Mugabe era. Two factions have emerged, one linked to Vice President Emmerson Mnangagwa and one to Mugabe’s wife.

Veterans want Mnangagwa to succeed Mugabe, but the president warned them last month against trying to influence the choice.

The newspaper supplements hailing Grace Mugabe, which were the first in Zimbabwean state media for anyone’s birthday but the president’s, ran gushing messages of praise from government ministries, including defence, and loss-making state companies.

“Dr Grace Mugabe: A woman who conquered Africa,” read a headline in the Herald newspaper, reflecting the growing political influence of the First Lady since her appointment to the top leadership of ZANU-PF in 2014.

The political infighting has been exacerbated by an economic crisis, widely blamed on mismanagement and, more recently, the effects of a scorching drought in the region.

Public anger over inflation, unemployment and other hardships has poured out into the streets in a nation-wide protest movement.

“(Mugabe’s) leadership has presided over unbridled corruption and downright mismanagement of the economy, leading to national economic ruin for which the effects are now felt throughout the land,” the ZNLWVA statement said.

“The President and his cohorts … have slowly devoured the values of the liberation struggle,” it said.