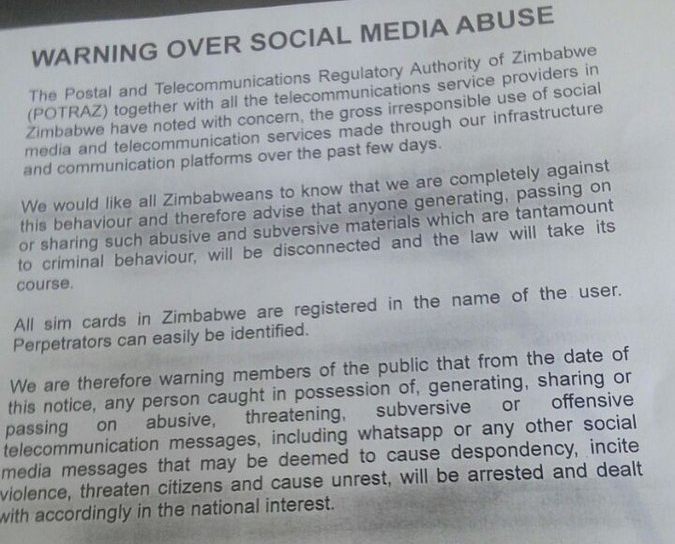 Zimbabwe’s increasingly totalitarian government on Wednesday shut down access to messaging service WhatsApp for the morning, but it appeared to be working in the afternoon after outrage swept Zimbabwe’s internet users.

Similar clampdowns on internet access during anti-government protests have occurred in in Burundi and the Democratic Republic of Congo in 2015, and Uganda earlier this year.

“WhatsApp constitutes about 34% of all mobile internet traffic in Zimbabwe and understandably, it being down affects messaging for a lot of Zimbabweans,” the Techzim blog reported, adding that the service was down for about four hours from 7am.

One of the major cellular networks – Econet – confirmed to Techzim its service had been disrupted: “Econet would like to confirm that WhatsApp is currently down. We will notify you once it is working again.”

Strikes in the form of stay-aways by civil servants, teachers, doctors and nurses have swept Zimbabwe as its collapsed economy has seen severe cash shortages, resulting in salaries not being paid. Minibus taxi drivers held a strike on Monday to complain about police extorting money during road stops. The hashtags #ThisFlag (started in April by Harare pastor Evan Mawarire) and #ZimShutDown2016 have been trending on Twitter.

Zimbabwe’s economy has been in freefall for years, under the rule of President Robert Mugabe, with hyperinflation causing the Zimbabwe dollar to be replaced with US Dollars and South African Rands. This latest round of unrest follows a ban last month on imported goods from neighbouring South Africa and riots at the Beitbridge border crossing. Traders regularly import basic food stuffs, grains and cereals, dairy products and bottled water as well as furniture, building materials, steel and kitchen products from South Africa.

The Postal and Telecommunications Regulatory Authority of Zimbabwe (POTRAZ)issued a warning about “the gross irresponsible use of social media and telecommunication services” and warned “that anyone generating, passing on or sharing such abusive and subversive materials which are tantamount to criminal behaviour, will be disconnected and the law will take its course”. 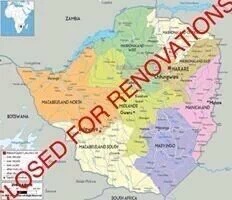 POTRAZ added: “All sim cards in Zimbabwe are registered in the name of the user. Perpetrators can easily be identified. We are therefore warning members of the public that from the date of this notice, any person caught in possession of, generating, sharing or passing on abusive, threatening, subversive or offensive telecommunication messages, including whatsapp [sic] or any other social media messages that may be deemed to cause despondency, incite violence, threaten citizens and cause unrest, will be arrested and dealt with accordingly in the national interest.”

Last year Burundi also shut down WhatsApp access during turmoil over attempts by controversial President Pierre Nkurunziza to serve a third term in office after his constitutionally mandated two-terms were completed.

Government forces loyal to Nkurunziza destroyed independent radio stations during an abortive coup last May. Radio is used by 90the majority of Burundi’s population for news, meaning people use social media like WhatsApp, Facebook and Twitter to share news.

Zimbabwe shuts down in protest over 'economic collapse'