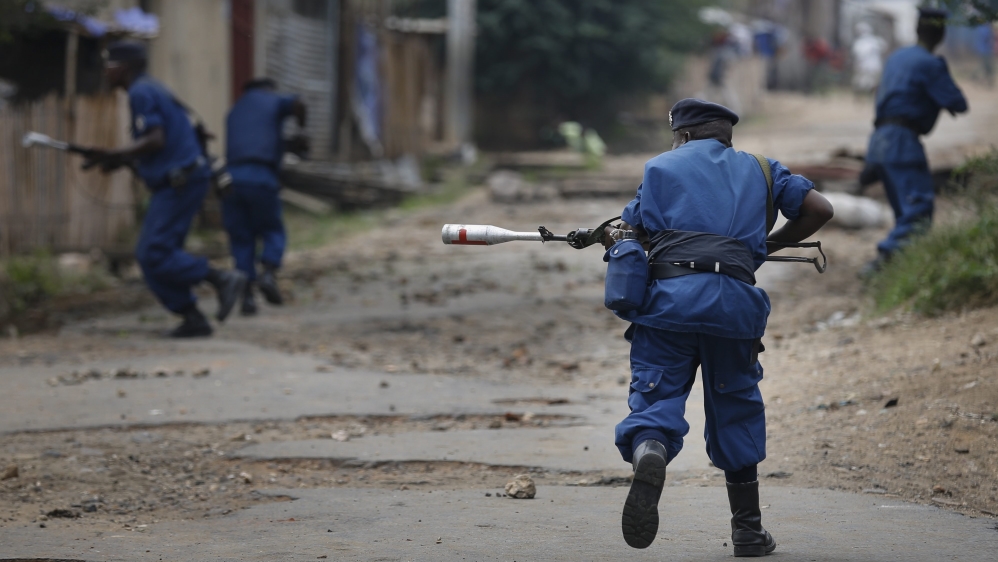 The UN Security Council has authorised the deployment of up to 228 UN police personnel to Burundi to monitor the security and human rights situation in the East African country.

Four of the 15 council members abstained from Friday’s vote.

More than 450 people have been killed since President Pierre Nkurunziza pursued and won a third term last year, a move his opponents say violated the constitution and a peace deal that ended a civil war in 2005.

Tit-for-tat violence by rival sides has left both government officials and members of the opposition dead.

READ MORE: For Burundi’s cartoonists, the truth is a joke

More than a quarter of a million people have fled the violence.

“Given an increase in violence and tension the Security Council must have eyes and ears on the ground to predict and ensure that the worst does not occur in Burundi,” said Francois Delattre, the French UN ambassador.

The violence has caused alarm in a region where memories of Rwanda’s 1994 genocide remain raw. Like Rwanda, Burundi has an ethnic Hutu majority and a Tutsi minority.

So far the violence has largely followed political rather than ethnic lines. But the UN High Commissioner for Human Rights said last month he feared increased violence and incitement could turn ethnic in nature.

“This time we are not waiting for the worst to occur before taking action,” Siti Hajjar Adnin, Malaysia’s deputy ambassador, told the council.

However, Samantha Power, US ambassador to the UN, said the resolution was not strong enough and that the UN police would simply be observers to Burundi’s problems.

She warned that the situation was “all but certain to deteriorate”.

“It is not at all clear to me that a council that says repeatedly that it has learned the lesson of Rwanda has in fact done so,” Power said.

“Police are not being deployed to protect civilians, even though civilians are in dire need of protection. That should embarrass us.”

Al Jazeera’s Daniel Lak, reporting from the UN headquarters in New York, said: “The ability of 228 police officers who are basically monitoring human rights and helping build capacity and reporting back to headquarters – they’re not really going to be able to do much to stop violence. But it is a symbolic move by the Security Council.

“They’ll be telling the world what’s going on there, and that’s the key – the international community is back in Burundi.”

Burundi has said it would only accept up to 50 unarmed UN police and that its sovereignty must be fully respected.

The UN needs approval from the Burundi government to send the police.

Council veto power China, along with Angola, Egypt and Venezuela, abstained from the vote.

“On the question of sending United Nations police to Burundi, it is necessary to respect the sovereignty, independence and territorial integrity of Burundi,” Liu Jieyi, China’s UN ambassador, told the council.

He said the resolution did not reference these principles, which is why China abstained.

A report released earlier this week by a leading human-rights advocacy group said members of the youth league of Burundi’s ruling party have “repeatedly gang-raped women since a wave of political protests began in 2015”.

Several women told Human Rights Watch (HRW) that Imbonerakure members sometimes would tell the victim they were raping her because they could not find her relative, the report said.

HRW said it interviewed more than 70 rape victims and that 14 said they recognised at least one attacker as an Imbonerakure member.

In pictures: Burundi today, after a year of unrest

“Many of the rapes appear to have been aimed at family members of perceived government opponents. Policemen or men wearing police uniforms have also committed rape,” the report said.

Rejecting the accusations via Twitter, Willy Nyamitwe, Burundian presidential spokesman, said the Imbonerakure are not a gang of rapists, adding that “these false allegations are not new and have been denied”.

The Imbonerakure, which means “those who see far” in the Kurundi language, has about 50,000 members across the country, according to Pierre-Claver Mbonimpa, Burundi’s most prominent human-rights activist.

For his part, Lambert Nigarura, a prominent lawyer and activist in Burundi, said: “They have powers and can commit any crime and go unpunished since they are supported by the government authorities to keep the president in power.”