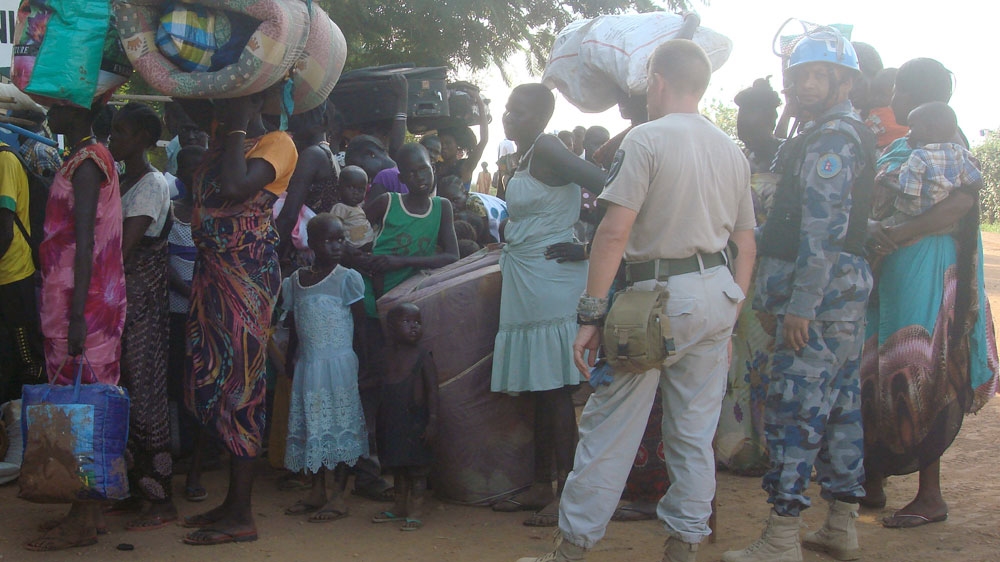 The number of South Sudanese refugees in East Africa could pass one million this year, the United Nations refugee agency said, calling on armed groups to allow safe passage for people fleeing the latest round of deadly violence.

Ann Encontre, a UN refugee coordinator in South Sudan, said on Friday there was concern about fresh outflows of refugees following clashes in the capital Juba, and appealed for $701 million in relief aid.

On Friday, the UN said at least 300 people had been killed in four days of intense gun battles, and 42,000 had fled the capital.

Even before the resurgence of violence in the past week, hundreds of thousands of refugees had been sheltering in Uganda, Sudan, Ethiopia and elsewhere since civil war began in December 2013.

William Spindler, spokesman for the UN refugee agency, said the number of refugees in neighbouring countries was now 835,000.

The recent violence in Juba echoed the fighting that triggered the civil war, marking a fresh blow to last year’s peace deal to end the bitter conflict, which began when President Salva Kiir accused ex-rebel leader and now Vice President Riek Machar of plotting a coup.

There are new reports that South Sudan authorities are blocking some citizens, including those with US or Canadian dual nationality, from leaving the country, authorities said.

On Thursday, Uganda deployed its military to help evacuate an estimated 3,000 Ugandans living in South Sudan. Several other foreigners also fled through Uganda.

On Friday, dozens of Sudanese women and children arrived in Khartoum from Juba, as Sudan also began to evacuate its nationals from South Sudan, which split from the north five years ago.

South Sudanese voted for independence from Sudan under a peace agreement in 2011.

Both Kiir and Machar earlier this week declared a ceasefire, but observers have warned that the violence could return. Machar has appealed to the UN to establish a “buffer zone”.

Machar’s sacking as vice president in 2013 set off a cycle of retaliatory killings that split the poverty-stricken, landlocked country along ethnic lines and drove more than two million out of their homes.

The conflict has been characterised by horrific rights abuses, including gang rapes, the wholesale burning of villages and cannibalism.

Meanwhile, Ethiopia said it was ready to send more soldiers to strengthen the UN peacekeeping mission in South Sudan.

“We’re more than willing to take on our part of responsibility in restoring calm in South Sudan,” said government spokesman Getachew Reda.