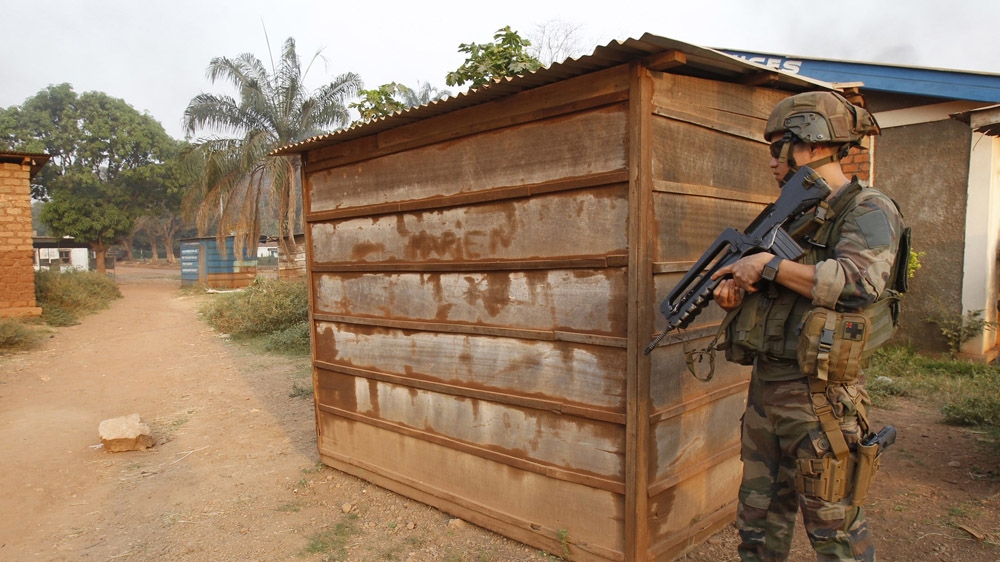 Bangui, Central African Republic – We’re inside an uncomfortably hot, stuffy and tattered tent at a camp for displaced Central Africans at the airport.

Nadine is fiddling with her fingers nervously. She struggles to find words and keep her composure as she narrates what happened to her on a night in February 2015. She cries as she tells us she was raped by international peacekeepers on the day her husband was killed by fighters of the Muslim Seleka rebel group.

“I had been out looking for him but it was getting dark and I couldn’t find him, so I decided to go back to the camp. At the last UN checkpoint, there were four peacekeepers. They called me – but I was reluctant to go, then one pointed a gun at me. They pushed me into a thicket and raped me. When they finished, I went home, slept, and in the morning went to the MSF [Doctors Without Borders] hospital here.”

Nadine says she was given some drugs and counselled by nurses at the hospital. She was afraid to file a report until she learned of more women and children who were accusing peacekeepers of sexual violations.

As the UN debate kicks off for a new secretary-general in New York on Tuesday, the new chief will have to deal with the ongoing allegations of sexual misconduct by its forces. A UN report leaked to media last year found troops often paid for sex with cash, dresses, jewelry, perfume, and mobile phones.

UN peacekeepers, as well as French and European troops, have been repeatedly accused of human rights abuses, including sexually assaulting women and children in Central African Republic (CAR).

The international force was deployed in 2014 to help restore order in CAR. This was after then-president Michel Djotodia was ousted the previous year, and the country plunged into sectarian conflict. Muslim rebels went on a rampage, killing indiscriminately – and triggering the formation of an equally violent mainly Christian anti-Balaka militia in response.

At that point, the UN mission was seen by Central Africans as a refuge, a safe haven – so when sexual abuse accusations dating back to 2013 started emerging, people were shocked and resentful.

The United Nations is investigating more than 100 cases involving several missions. In August last year its special envoy to CAR, Babacar Gaye, was forced to resign as the accusations against his troops mounted.

Parfait-Onanga Anyanga took Gaye’s place as the special representative to the UN’s secretary-general. He has been at the helm for 10 months now. We met with him in Bambari, northeast of Bangui where he had gone to visit troops and the local communities. He inherited a force whose reputation has been badly damaged and has a hard job trying to building back trust.

“We are taking every report made very seriously, we’re engaging with community leaders and where misconduct is proven, we’re are taking care of the victims – financially, medically and psychologically,” Anyanga told Al Jazeera.

But he can only do so much.

Time for Eastern Europe to shine at the United Nations

The United Nations Security Council has adopted a resolution calling for the repatriation of peacekeeping units whose forces are implicated in human rights abuses. Several have been sent home, most evidently contingents from Congo Brazaville and the Democratic Republic of Congo.

They also know these are complex matters and investigations need to be thorough. Many may not have reported sex assaults when the incident occurred – that’s a big complication. There’s also the very real problem of false allegations.

Women we talked to in some of the camps said life is tough, there’s no food aid anymore, and they have to do what they can to survive.

“Sometimes we see the peacekeepers as a source of money and that means survival. They take advantage of that way by paying women or children – and if that does not work then they resort to more aggressive ways of getting what they want,” one woman told us.

As much as there is anger, there is also an understanding among the people that the UN mission is still crucially important. It oversaw a peaceful presidential election this year.

But President Faustin-Archange Touadera‘s government is still weak, and with no properly functioning army or police force the peacekeepers are still very much needed.

“This is a huge problem for the government. We have asked the UN mission [MINUSCA] to aggressively investigate so my government can follow up with troop-contributing states to do their own investigation and put their troops to trial. We are working with the UN to identify the genuine cases, so justice can be done and the victims can also get compensated,” the president said.

The Democratic Republic of Congo has already begun trying its troops before a military tribunal. Two soldiers have denied raping children, while a third was charged with attempted rape. In all, 21 Congolese peacekeepers are accused of sexual abuse in CAR and will be prosecuted.

But DRC is just one country that is seemingly taking some action against its soldiers. In other implicated countries there have been little or no investigations on the conduct of their troops.

Central Africans have endured a brutal history that keeps repeating itself. They are trying to survive in a country that’s literally on its knees. Militia groups control huge territories in rural areas, and the government has little authority beyond the capital, Bangui.

One man at a camp for displaced people told me: “A peacekeeper took my wife, offered her money, violated her, and took her away from me. I don’t consider that rape, but he took advantage of our poverty and his position. So I say he abused her.”

But he also speaks for many when he says without the international peacekeepers, people would be at the mercy of violent armed groups – and that’s what makes the situation even more desperate.