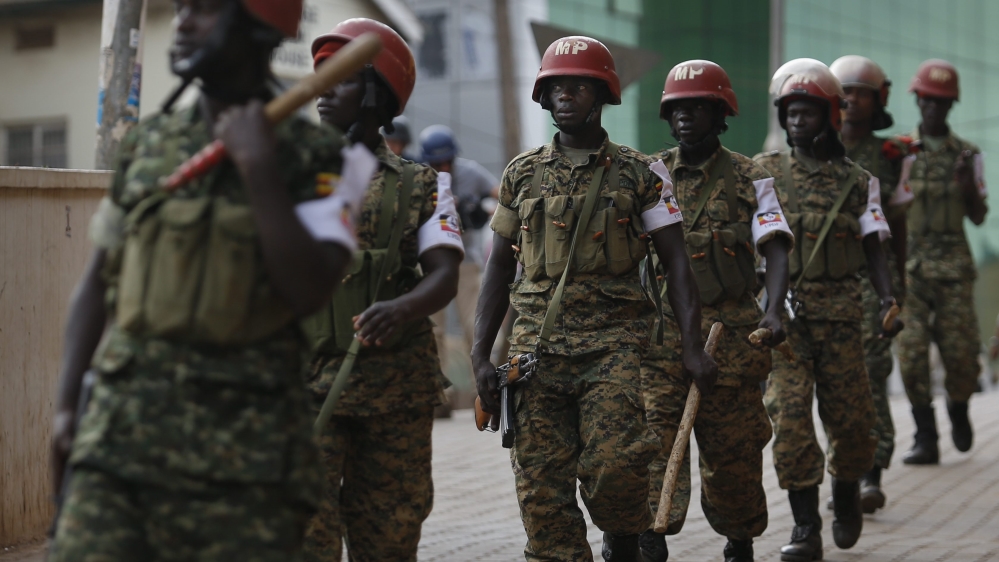 A heavily-armed Ugandan military convoy has crossed into South Sudan to evacuate citizens trapped by recent fighting in the capital, Juba, according to officials.

The operation comes a day after the UN warned of the possibility of fresh fighting in Juba, despite a two-day ceasefire that followed a major outbreak of violence, in which almost 300 people were killed.

The Ugandan army convoy of around 50 trucks escorted by machine gun-mounted armoured vehicles crossed the border on Thursday at Nimule, some 200km from Juba, to open up a secure corridor for fleeing civilians.

“We plan to go to Juba to extract 3,000 Ugandans stranded by fighting, but that number may grow as we will evacuate anyone who wants to leave of any nationality,” said army chief Brigadier Leopold Kyanda to the AFP news agency.

“There may even be some South Sudanese who want to leave.”

“Juba is totally peaceful and calm now and we do not expect any problems. The problems could be on the road where there are some few thugs. The first responsibility of any UPDF soldier is to protect himself and we are confident in this,” Kyanda said.

Al Jazeera’s Malcom Webb, reporting from Kampala, said there are about 3000 Ugandan civilans in Juba, so many of those empty trucks deployed are to “bring back their civilians home”.

“These are the kind of risks civilians have been saying that they are facing, so this is the reason that the Ugandan army are deployed to bring back its civilians home.”

The Ugandan army joined the conflict in South Sudan soon after it began in December 2013, fighting on the side of President Salva Kiir against a rebel force led by Riek Machar, now the country’s vice president.

The Ugandan presence helped prevent the capital from falling into rebel hands while its attack helicopters were deployed to bomb rebel soldiers out of regional towns. Ugandan troops only pulled-out late last year.

Although military officials insist Thursday’s incursion is a straightforward evacuation mission, an intelligence officer, speaking on condition of anonymity, said that some Ugandan troops may remain in Juba.

“Why not? We have the capacity to support the government of South Sudan and we were there before,” the the plain-clothed officer accompanying the convoy told AFP.

The White House also said on Wednesday that it had deployed 47 troops to South Sudan to protect US citizens and the US embassy after an outbreak of deadly violence in the country.

“These deployed personnel will remain in South Sudan until the security situation becomes such that their presence is no longer needed,” the White House said in a statement.

The combat-ready troops arrived in South Sudan on Tuesday.

An additional 130 military personnel currently in Djibouti are also prepared to provide support as necessary, the White House said

India’s External Affairs Minister Sushma Swaraj announced on Thursday that two aircraft had landed in Juba for evacuations, a day after Germany said it was also getting its nationals out of South Sudan.

On Wednesday, Machar urged the UN to establish a “buffer zone” between his forces and government troops who are loyal to Kiir.

At least 42,000 people have fled their homes in the latest flare-up, with 7,000 taking shelter in UN peacekeeping bases. Aid groups and churches in the city have taken in 35,000 people.