“Poor people often fail to meet their needs because they don’t have cash, but once they get it they usually spend it wisely” 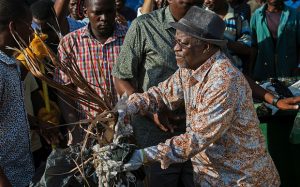 KIKWEMBE, Tanzania, July 24 (Thomson Reuters Foundation) – Tatu Mtulya looks older than her age. Her sun-parched skin and the repairs to her well-worn dress say it all. She is poor.

The 49-year-old single mother lives in a grass-thatched house with her four children in a village next to a highway in Tanzania’s northern Muheza district.

She is among thousands of women from families deemed extremely poor who have been singled out to receive cash handouts as part of the government’s efforts to lift its citizens out of poverty.

Mtulya spent her grant of 355,000 Tanzanian shillings ($160) to set up a small cafeteria selling homemade dishes of rice, meat, chicken and the local staple ugali so that she could earn a regular income.

“Through my business I get a good income to help me pay for what my children need,” she told the Thomson Reuters Foundation.

While she has now has a modicum of financial security, Mtulya, whose husband left her years ago, is still in her two-roomed shack that’s prone to flooding. Her two daughters, aged 19 and 15, share a narrow bed in one of the rooms.

Mtulya sleeps in the other room with her two sons aged 11 and 8. A dusty old mattress lies on the floor. Chicken droppings litter the floor and a hungry cat meows from afar.

More than 6,000 families in Muheza – at the foot of northern Tanzania’s Usambara Mountains – have received financial support to improve their livelihoods under the conditional cash transfer initiative run by Tanzania Social Action Fund (TASAF).

In the same village, six and eight-year-old girls Sakina and Zulfa were born out of wedlock and live with their grandmother, Tatu Mfanga, who could barely afford food and clothes for them, let alone send them to school.

The frail-looking 63-year-old also qualified for a cash grant which helped her join a women’s enterprise processing and packaging cassava. She can now cover her grandchildren’s basic needs.

“I’m glad my grandchildren are now going to school,” she said. “Cassava flour is very marketable especially in Dar es Salaam, we package and sell many kilos every week.”

Family breakdown is a huge problem in Kikwembe village. Fathers often walk out on their partners and children to avoid the financial responsibilities, say village officials.

Through TASAF, more than 6.6 million Tanzanians deemed to be extremely poor are likely to benefit from a cash transfer with $200 million in new World Bank funding, according to a statement from the bank issued in June.

A 2013 World Bank report suggested that Tanzania cash transfer programme had proved to be a successful method for reducing income poverty, and women beneficiaries are more likely to prioritise the welfare of children.

“As household incomes and livelihoods improve, they have been able to increase their consumption of education and health services which are crucial for their self-sustenance,” Manuel Salazar, World Bank Lead Social Protection Specialist, said in a statement in June.

In order to receive payments, targeted families have to abide by the conditions set by a locally-elected village committee, which monitors how the cash is spent. For those who fail to comply, the committee will decide on punishments – such as ordering the offender to fetch water for the village clinic for several days or undertake some construction work.

An average of $200 per household is then given to families to enable them to invest in small-scale income generating activities such as poultry businesses or vegetable farming.

“Poor people often fail to meet their needs because they don’t have cash, but once they get it they usually spend it wisely,” Anne Masha, a senior economist in the Tanzanian ministry of finance told the Thomson Reuters Foundation.

She said cash grants could often be more effective than other traditional forms of aid such as food handouts because the process of transferring it to the recipient is faster and cheaper.

BELOW THE POVERTY LINE

Shadrack Mziray, TASAF’s auditing manager in the Tanga region, said about 6,422 poor households in Muheza had benefited from the programme.

“Our focus is to reach people who are extremely poor so that we can help them to gain skills on how to invest their money in income generating activities,” he said.

The programme targets people living below the poverty line of one dollar a day, which, according to Tanzania Bureau of Statistics data, includes 13.5 million people across the country.

For those who benefit, the small grants can be life-changing.

“I have set a target to save money and build a new house,” said Mtulya. “With a roof made from iron sheets.”