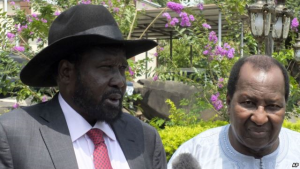 South Sudan’s First Vice President Riek Machar has called for President Salva Kiir not to violate a peace accord signed last year by recognizing and confirming Taban Deng Gai as his replacement.

Efforts to replace Machar came after Kiir’s 48-hour ultimatum for Machar to return to Juba expired Saturday. Kiir had invited Machar, the leader of the Sudan People’s Liberation Movement in Opposition, for a meeting to resolve recent clashes between opposing groups loyal to the two men that have left at least 300 people dead.

The Joint Monitoring and Evaluation Commission that oversees the implementation of the peace accord issued a statement sharply opposing news of Kiir’s replacement as first vice president.

“We recognize First Vice President Riek Machar as the legitimate leader of the SPLM-IO.  A change to the leadership depends on the IO itself, and we are not here to speculate as to any change of leadership,” the commission was quoted in the Sudan Tribune as saying.

Machar’s spokesman, Dak, says it is illegal to nominate Gai because he was fired from his post in the SPLM-IO. The peace agreement stipulates that if the first vice president is away for any reason, he would delegate a person to act on his behalf, according to Dak.

Supporters of the president say Kiir needs a partner to work with in the implementation of the peace accord, and the refusal of Machar to return to Juba inhibits the process. They also say the first vice president appears not to working to resolve issues with the president.

Dak disagreed, saying Kiir should have accepted a proposal by both the African Union and the Intergovernmental Authority on Development (IGAD) to have a third and impartial force involved to improve security. 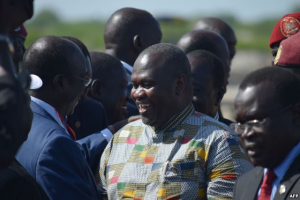 Meanwhile, South Sudan Information Minister Michael Makuei said Friday that a coup attempt led to the recent clashes in Juba, but he did not say who was to blame.

“There is no doubt that it was a coup,” Makuei said. “There are some ministers and civil servants who have not reported to work since the fighting started. … The council of ministers has directed that those people report to work this coming Monday [July 25] or face some consequences.”

But Dak says there wasn’t any attempt to overthrow the government.

“They like the word ‘coup,’ he said. “If it were a coup, I think it was the force loyal to President Kiir who attempted the coup, because they are the ones who fired the first bullet at our forces.”