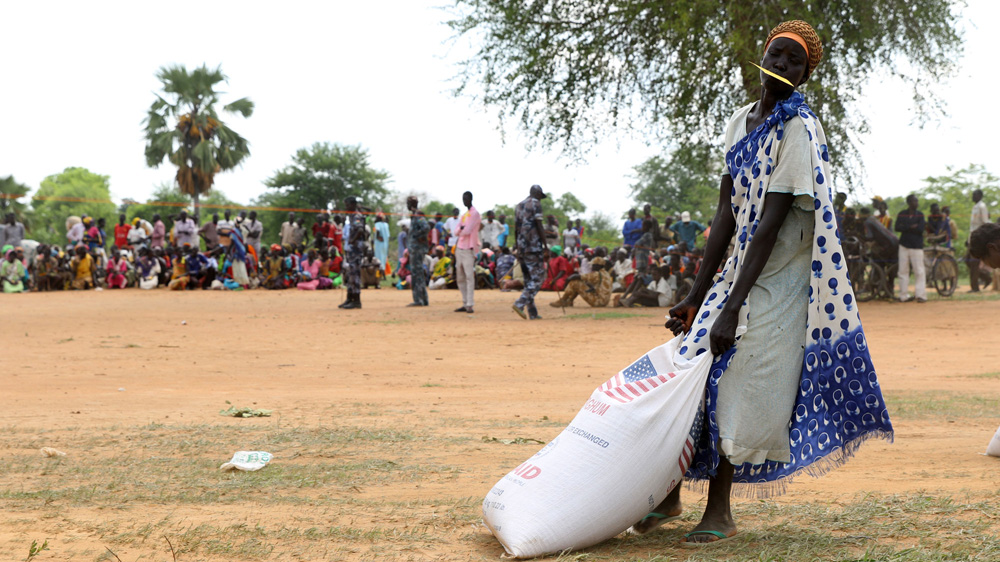 Aweil and Kiir Adem, South Sudan – The fields around Aweil town were covered with a promising, lush green carpet of budding sorghum plants. In three months, it would be harvest season in South Sudan’s Northern Bahr El Ghazal region.

Yet three months was longer than many here could afford to wait. Hunger had already forced tens of thousands to abandon their fields and migrate north to Sudan, a country they seceded from only five years ago following decades of brutal civil war.

“All of the young people have gone to Sudan,” said Abak Achuil, while kneeling in the dry soil to remove the weed that had encroached on her sorghum plants.

“My own son left in February to find work there.” Aged 65 and too weak to attempt the long and risky journey, she had no choice but to stay behind. The fledgling crop was her only hope.

The region of Northern Bahr el Ghazal was spared much of the violence that engulfed South Sudan when the most recent conflict erupted in December 2013 between forces loyal to President Salva Kiir and his rival Riek Machar.

In the latest escalation of the volatile relationship, President Kiir replaced Machar, who had been reappointed as vice president.

But last year’s harvest failures, caused by erratic rains and pests, proved too much to stomach for this vulnerable population of returnees.

“The rain came very late, and when it came, it only rained a few times,” Abak said. “By the time the harvest time came, the crop had just withered away.”

Many of the area’s inhabitants only recently came back from Sudan, where they had fled during the second civil war, which began in 1983.

A peace deal signed in 2005 between the Khartoum government and the SPLM, the former liberation movement and current ruling party, ushered in South Sudan’s independence in 2011, prompting hundreds of thousands of South Sudanese to return in hope of starting a new life in their own country.

Now, only five years later, South Sudanese authorities say that more than 100,000 have gone back to Sudan.

“The situation in Northern Bahr el Ghazal is really critical. Most of the returnees who came from Sudan are thinking about going back,” said Deng Kuel from the government’s Relief and Rehabilitation Commission in Aweil.

Half the region’s population grapples with severe food insecurity, according to recent figures released by the United Nations.

Still, the government has been reluctant to let them migrate back to Sudan.

Five years after South Sudan’s independence, the border remains officially closed amid simmering tensions between the governments in Khartoum and Juba, stoked by mutual accusations of support for rebel groups. Few South Sudanese are able to secure the necessary exit permits from their country’s National Security Services. While young adults tend to take the risk of sneaking across illegally, families with children often remain stranded at the border.

In the town of Kiir Adem, located in a contested border area known as Mile 14, thousands of women and children have lingered for months without food, waiting for an opportunity to cross the river Kiir to Sudan. The river, called Bahr El Arab by the Sudanese, currently marks the de-facto border between the two countries, but the official borderline has yet to be delineated.

With four small children in tow, Barnia Kon Dumo had walked for three days along the deserted gravel road to reach the border town.

Except for the occasional military truck, there had been no cars to give them a lift. Knowing all too well the difficulties of the journey, Barnia decided to split the family in half, leaving her other four children behind with relatives.

“I don’t have the papers to cross to Sudan, but maybe they will let us through anyway. There’s nothing left for us here,” she said. “In Sudan, I can at least try to find work making tea or cleaning houses and send some money back.”

With only 40 South Sudanese pounds (less than $1) to her name, the pot of porridge Barnia had prepared for her children that day could well have been the last proper meal they would eat for a while.

Since their arrival, most of those stuck in Kiir Adem have relied on nothing but leaves, palm fruits and fermented roots. The United Nation’s World Food Programme had registered hundreds of families for an upcoming distribution of food, although some complained of having been left out.

Despite the hardships, South Sudanese authorities have refused to let those uprooted by hunger cross the border to Sudan, uneasy that so many chose to abandon their young nation and return to a country the ruling party still views with animosity.

“The South Sudanese are a problem. They don’t feel good about the movement of people to Sudan. That’s why we are now stuck here in Kiir Adem,” said Teresa Alakir, one of the displaced.

Others said that even if they managed to get past the South Sudanese authorities, Sudanese officials would often send them back unless they bribed their way across.

The closure of the border has compounded the effects of the harvest failure on the population of Northern Bahr el Ghazal, which heavily relies on goods brought from the north.

The market in Aweil is running low on basic staples such as sorghum and maize, with Sudanese traders struggling to sneak past corrupt border officials. Risking confiscation of their trucks if they don’t pay, they are forced to charter their course through the bush, using small, muddy trails that become impassable during the rainy season.

“The money the Sudanese traders make is very little given the risk they take, so they have stopped coming. In the last three weeks, I saw only one truck coming from the north,” said Mubarak Adam, a Darfuri shop owner in Aweil’s market.

After more than two years of conflict, South Sudan’s economy is on the brink of collapse. The South Sudanese pound has been in freefall since the Bank of South Sudan was forced to abandon its dollar peg in December last year. The depreciation of the currency, coupled with triple-digit inflation, has crippled South Sudan’s import-based economy, placing the most basic items beyond the reach of ordinary citizens.

As thousands lined up for food distributions near Aweil, few seemed to hold hope that their fortunes would soon change. Violence continued to destabilise many parts of their country, while this year’s harvest hung in the balance amid unpredictable rains.

Even though independence hadn’t changed their lives for the better, it was the only thing many here could hold on to.

“I’m still happy that we got our own country. The only problem is that we are hungry. That is the only reason people are going back to Sudan,” said Abak Achuil.