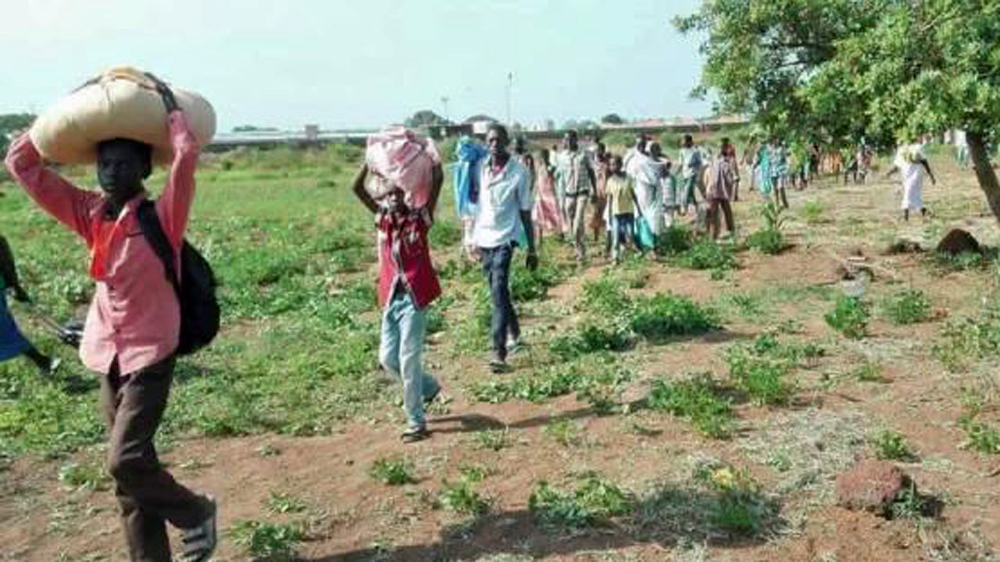 Juba, South Sudan – Dozens of people have been killed and more than 120,000 displaced from their homes in a wave of fighting in Wau, one of South Sudan’s largest cities, almost a year after a peace agreement was signed to bring an end to civil war in the country.

Clashes between the Sudan People’s Liberation Army (SPLA) and members of the Fertit tribe began on June 24, say sources in the city. The SPLA is predominantly made up of members of the Dinka tribe, the largest in the country.

At least 43 people were killed in the fighting, according to a government statement on June 28.

An independent count of casualties has not been done, and the actual figure could be much higher than the government estimate.

“We’ve not been able to get access to the southern part of the town, which is apparently where most of the heavy artillery fire was,” Shantal Persaud, a spokeswoman for the UN Mission in the Republic of South Sudan (UNMISS), told Al Jazeera.

At St Mary’s Cathedral, one of several churches in the town, 13 people have been buried, Father Natale, a priest at the church, told Al Jazeera. The dead included a three-year-old child.

“A lot of people have been killed,” said Natale. “Dinka youths came to the town, some of them in uniform and others with spears and machetes. There were dead bodies on the streets.”

Although calm has been restored in Wau, an atmosphere of lawlessness prevails, says Natale. “The Dinka youths are looting people’s houses and taking everything they have. All the residential areas in the south and west of Wau are empty.”

The UN Security Council called on the government to prosecute those responsible for the violence in Wau. “Attacks against civilians may constitute war crimes and those involved could be potentially subject to sanctions,” a statement said.

According to estimates from the UN Office for the Coordination of Humanitarian Affairs (OCHA), almost 50,000 people have been displaced within Wau.

St Mary’s Cathedral is providing shelter to 10,000 people who fled the fighting, and more than 12,000 people are living in cramped conditions and without shelter on a site adjacent to the UNMISS base in the town.

Two local schools are accommodating at least another 17,000 people, and two other churches are each providing shelter for 1,000 Wau residents, according to OCHA.

“We provided rations for 5,200 people in the first 48 hours, and have supplemented this with another 4,500 rations,” said Layal Horanieh, spokesperson for the International Committee of the Red Cross in Juba, which is supporting the SSRC.

“It’s just an office compound – it’s not designed to be a shelter for people. It’s one of many gathering points that formed across the town.”

In addition to almost 50,000 people displaced within Wau, more than 70,000 civilians have been displaced outside the town.

“We’ve managed to reach people to the southwest of Wau, which was the area we were most worried about,” Horanieh told Al Jazeera. “We have distributed food rations to more than 73,000 people in Biringi, Ngoku and Ngohalima.”

Beside its base in Wau, the UN is providing a degree of protection to its 12,000 guests and is coordinating with humanitarian agencies to provide food, water and shelter to the displaced.

But UNMISS is determined that the site does not become a long-term home for Wau residents, as has happened at UN Protection of Civilians (POC) sites in several other towns in the countrysince the start of the civil war in South Sudan in December 2013.

“There is a perception that UN bases opening their gates is the norm, and that’s not the case,” said Persaud. “It’s a last resort, a last measure, when we’ve exhausted all other options.”

There are concerns that the current level of protection at the site, which amounts to little more than a barbed wire perimeter, is insufficient to protect the displaced from possible attack.

Two people were killed on June 25 on the way to the UNMISS site, not far from the ad hoc camp.

“Regrettably two people were killed on Saturday close to the perimeter around the site,” said Persaud. “It’s not clear whether they were killed by stray bullets, or whether it was a deliberate attempt to prevent them from reaching the camp.”

There are no plans to build a more robust perimeter around the camp, although the situation is “being monitored”, said Persaud.

“Should the situation deteriorate, we will make a decision then. We will continue to provide protection by reinforcing the areas they [the displaced] are in, we have peacekeepers stationed around the area, and we are also pushing for dialogue between the two sides.”

The UN has taken steps to reinforce its personnel in Wau. “We have sent in more peacekeepers to reinforce the security buffer,” said Persaud. “We have added 150 troops and 50 personnel to formed police units.”

Patrols are also still limited to areas to which the UN has been granted access. “We are still negotiating with national and local authorities to have more access,” said Persaud.

Despite continuing to provide protection to more than 150,000 civilians in POC sites across the country, the UN is under scrutiny for its failure to prevent an attack on the POC at Malakal earlier this year, in which 19 people were killed and more than 100 wounded.

In a statement on June 22, the UN said it took “very seriously” the findings of an internal investigation that concluded that there was an “inadequate response by some of our people on the ground”, and that “confusion over command and control and rules of engagement” hampered some peacekeepers’ response.

Herve Ladsous, the UN undersecretary for peacekeeping operations, told reporters that “certainly there will be repatriation … in some cases of a unit and in other cases of individual officers”.