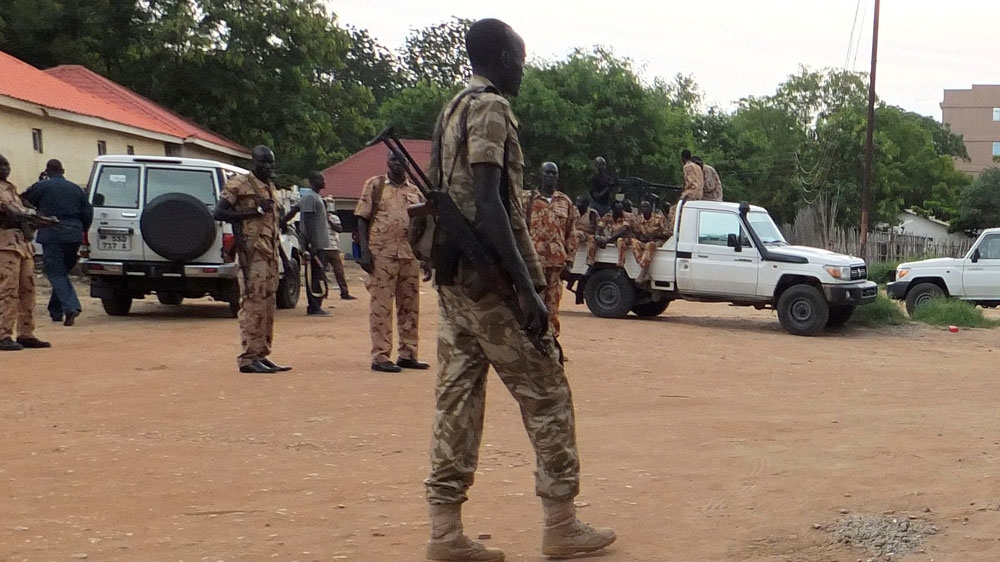 Renewed clashes have broken out in the South Sudanese capital, Juba, despite calls by the UN Security Council for rival factions to “urgently end the fighting” that has engulfed the city in recent days.

Hundreds of people, mostly soldiers, have been reportedly killed in the fighting between rival armed groups since Thursday, raising fears of a slide back into all-out conflict in the five-year-old country.

“Fighting began in Jebel, southwest of the city; there’s also been fighting in Gudele, to the east of the city; and now there are mortar rounds being heard in the downtown area,” he added.

“What this means is that the ceasefire government officials had talked about – the unilateral government-led ceasefire – has not been carried out. The fighting does continue in at least two spots on Monday and that means that whatever peace talks there have been, they have not been successful.”

The latest bout of violence comes hours after a UN Security Council emergency meeting said South Sudan’s neighbours should help end the fighting and be prepared to send additional troops to bolster the UN mission in the country, UNMISS.

“The members of the Security Council urged an immediate end to the fighting by all concerned and demanded that President Kiir and First Vice President Machar do their utmost to control their respective forces, urgently end the fighting and prevent the spread of violence,” the council said in a statement on Sunday.

Expressing “shock and outrage” at attacks on UN compounds, which killed and wounded Chinese and Rwandan peacekeepers, the council also demanded that civilian sites be protected and warned that “attacks against civilians and UN premises and personnel may constitute war crimes”.

Al Jazeera’s Mike Hanna, reporting from the UN headquarters in New York, said delegates expressed “deep concern” about the recent upsurge of violence in Juba and discussed ways to make the work of the 14,000 peacekeepers “easier” and “safer”.

“Also discussed during the meeting was the impact on civilians, a large number of whom are reportedly sheltering in UN facilities,” Hanna said.

More than 1,000 people fled to a UN compound in Juba as heavy fighting broke out, and two UNMISS sites in the capital were hit by small and heavy arms fire, the UN said in a statement.

Following a localised firefight between rival military factions on Thursday night in Juba, major fighting erupted on Friday outside the presidential compound as Kiir was meeting with Machar, a former rebel leader and currently first vice president. The fighting quickly spread throughout the city.

An Al Jazeera correspondent who was inside the presidential compound during that attack later saw bodies of soldiers on the lawn and reported that thousands of displaced residents were trying to find safety amid the chaos.

INTERACTIVE: How far has South Sudan come since independence?

Kiir and Machar both appealed for calm as the fighting engulfed parts of the city, and amid confusion as to whom exactly was responsible.

On Sunday, a day after the country reached the fifth anniversary of its independence, residents of Juba’s Gudele and Jebel districts reported heavy gunfire near the barracks where Machar and his troops have their headquarters.

Gunfire was also heard from the area near the airport, which local sources said had closed.

South Sudanese Information Minister Michael Makuei Lueth laid the blame for the fighting on opposition forces loyal to the vice president, Machar, while Taban Deng, the minister of mining, called for opposition forces to join a unilateral ceasefire.

“Our people have suffered so much, they don’t need any more suffering even for a minute. This is a call to our generals in both armies that they should ceasefire immediately,” Deng said at a news conference in Juba on Sunday.

“After another day of intense battles, the people of South Sudan await word on whether the next step is ceasefire or continued fighting,” Hendren said.

Expo 2020: Dubai as a springboard for doing business in Africa