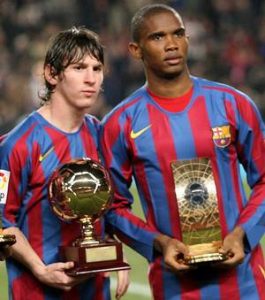 Samuel Eto’o plays for Turkish Super Lig club Antalyaspor nowadays, and it is in that Mediterranean city that he will host a charity match in a couple weeks, which will feature a whole host of massive stars, including Chelsea’s Eden Hazard.

Apparently there had been some fears that the match would be canceled in light of the recent terror attack at the airport in Istanbul, but Eto’o’s charity organization has released a statement confirming that there’s been no change of plans.

“The Eto’o Charity All Star vs Turkish Stars charity game involving Messi, Neymar, Suarez, Maradona, Eden Hazard, Totti, Michael Essien, Xavi, JayJay Okocha, Pierre-Emerick Aubameyang, Iniesta and Arda Turan will go ahead at the Antalya Arena on 16 July. The game will not be cancelled it will go ahead.”

That’s certainly an illustrious list of potential attendees, though I wouldn’t be surprised if some of them end up missing out.  Hazard, for example, should either be on holidays still or joining up with Chelsea at the preseason camp in Austria.  In fact, July 16th is the date of Chelsea’s very first pre-season match, inaugurating Rapid Vienna’s new stadium.

Hazard or no Hazard, there should still be plenty of football entertainment on tap.  And it’s for a worthy cause!