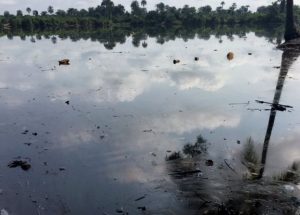 In some places the pollution has killed all the fish

The Nigerian government has launched an unprecedented $1bn (贈750m) operation to clean up the environmental damage caused by the oil industry, and it will be paid for by the polluters. But will it work? The BBC’s Stephanie Hegarty reports from the Niger Delta.

The mangroves that used to stretch across the creeks of Kegbara Dere, Ogoniland, are now dead – their naked, rotten trunks stick out of the water, like skeletons coated in a layer of black.

This is the price that has been paid for the discovery of oil.

Erabanabari Kobah, an environmental campaigner who grew up on these creeks, used to fish here during his school holidays to make a little money to pay for his school books.

But he says children cannot do that anymore.

“This used to be a very flourishing mangrove forest full of diversity but as a result of the continuous oil spills the fish are all dead,” he says, as he navigates a creek in a small wooden canoe.

“People can no longer do their fishing here. It’s sad to see it like this.”

Kogbara Dere was a fishing village in which life revolved around the creek.

Oil was discovered here in the 1950s but by the 1990s the wider Ogoniland community pushed the oil company operating in the area, Shell, out of the creek.

For many years afterwards the abandoned oil wells leaked until they were capped in 2010, but by then the damage was done.

In 2011, the Nigerian government called on the UN Environment Programme to do an independent report on the damage in Ogoniland.

Researchers found that oil had penetrated far deeper into the soil than anyone expected and said the clean-up could take up to 30 years.

They said the people of Ogoniland were exposed to extreme health hazards from air and water pollution.

In some cases, cancer-causing compounds in crude oil – like benzene – could be found in drinking water at more than 900 times the safe level.

Despite the damage some communities are opposed to a clean-up fearing that the money spent on it could end up in the wrong hands.

The experience of what has happened in Bodo, just down the coast from Kogbara Dere, may shed some light on the difficulties ahead.

It was once a quiet fishing town but became famous last year when Shell paid out almost $80m in compensation for two major oil spills.

That money was split between 15,600 local people, with each getting about $3,000, and the rest was earmarked for the community as a whole, but that has also now been distributed to individuals.

It was a huge windfall for people who were until then living hand to mouth.

It also bitterly divided the community.

Part of the 2015 deal said Shell must clean up the mess, but that surprisingly is not what many people want.

“I believe the money earmarked is for the clean-up. This is for [the benefit of] the community therefore money should be paid to them”

Fisherman Siitu Emmanuel was one of the beneficiaries of the pay-out and spent it building houses for his children.

He says he is not in support of Shell doing the clean-up – instead he wants the money that was going to pay for it to be split amongst the community.

“I believe the money earmarked is for the clean-up. This is for [the benefit of] the community therefore money should be paid to them,” he says.

And most people in Bodo agree with him, they would rather have money in their pockets than see the environmental problems sorted out.

The damage to the creeks has been so profound that many cannot even imagine returning to the life they had as fishermen before.

How clean is clean?

Clean-ups in places like Kogbara Dere have been attempted in the past but according to some residents they have not worked.

Comfort Gbode’s farm is beside a pipeline which spilled oil in 2012 destroying much of her land.

Mrs Gbode and her husband still farm the land but the crops are stunted.

A clean-up was done but had little effect.

“They said they were cleaning the soil, I saw tippers coming in to dump new soil on top,” she says. “But it’s not clean, we still can’t farm the land.” 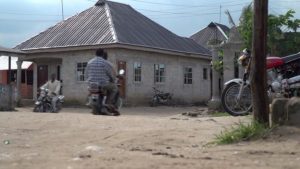 A core of activists is still arguing for the clean-up to happen. One of them, Sylvester Kogbara, had his home attacked by local youths opposed to it.

The conflict got so violent that in February four people were killed in clashes.

Father Abel Agbulu, Bodo’s Catholic priest, was called in to stop the violence and understands better than most why it happened.

“They don’t really trust any kind of negotiations or negotiators from the community,” he says.

This is the land that has made many Nigerians super rich and yet he says many of his parishioners are surviving on one meal a day.

People here are used to seeing oil money go into the wrong hands.

Likewise, they believe the money spent by Shell to sort out the environmental damage will end up with corrupt local politicians and contractors.

For its part Shell is committed to undertake a clean-up operation but says it is too dangerous to begin work until the Bodo people are ready to welcome them.

They have been in talks with various groups for three years to get the work started.

But those talks have stalled repeatedly.

Dutch ambassador John Groffen acts as a mediator and explains why the process has been so difficult.

“We wanted to make sure that it wasn’t happening in the old ways where contracts were being given out to contractors in an underhanded way,” he says. 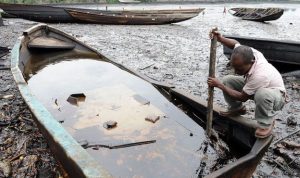 “In the end some parties, some contractors, some youths felt they were left out of the process and there was a push back from those groups.”

Until the allocation of those contracts is sorted out, the creeks continue to rot.

Bodo is just one community, there are thousands like it in the Niger Delta.

The task of cleaning up is mammoth.

But the Nigerian government says it is determined that its own plans will work.

Environment Minister Amina Mohamed is aware of the murky local politics at play.

“A lot of the [issues involve] transparency,” she says.

“It’s not about sharing money. It’s about contracting people to do work that needs to be done to clean up the Niger Delta.”

But even if this does happen, it could be 30 years before these creeks are clean again.