Eritrean and Sudanese asylum seekers in Israel face an impossible choice: stay and risk detention or leave “voluntarily” for Rwanda or Uganda. 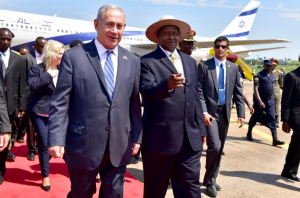 Earlier this month, Israel’s Prime Minister Benjamin Netanyahu concluded a visit to East Africa, the first of his premiership. On the trip, he visited Ethiopia from which many Jews have immigrated to Israel, primarily in the 1980s and early 1990s. He spent time in Kenya, where there was talk of Israel helping the government build a wall along its border with Somalia. And he also stopped over in Rwanda and Uganda.

Uganda is doubly symbolic in collective Jewish-Israeli memory. In 1903, the ‘Uganda proposal’ put the territory forward as a supposedly alternative site for Jewish self-determination; the Zionist Congress rejected it. And Uganda was also the site of the Entebbe raid on 3-4 July 1976, when an Israeli commando squad rescued 103 civilians being held hostage after a plane was hijacked en route from Israel to France. Netanyahu’s brother, Yonatan, was among those killed, and the PM attended the 40-year commemoration of the event in which Uganda’s President Museveni awkwardly referred to Israel as “Palestine”.

However, beyond the symbolism of Netanyahu’s visit to Uganda, his striking of economic partnerships elsewhere, and the strengthening of diplomatic links in the region, there was also another item on his agenda. As Netanyahu visited Uganda and Rwanda, it is likely that one of his priorities was to discuss secret agreements regarding the transfer of Eritrean and Sudanese asylum seekers from Israel.

Israeli law defines Eritreans and Sudanese residing in Israel as “infiltrators”, and Netanyahu’s government has allegedly struck confidential agreements with certain third countries to accept those who have agreed to leave “voluntarily”. The government has not officially named Uganda and Rwanda as those countries, but their identity has been widely reported and is essentially now an open secret.

According to official government figures, there are currently over 30,000 Eritreans and over 8,000 Sudanese residing in Israel, having fled from their countries of origin. In a UN Commission of Inquiry this June, Eritrea was described as an authoritarian state where crimes against humanity are committed with impunity. Meanwhile, most Sudanese nationals in Israel originate from Darfur, where at least 300,000 people have been killed and over two million displaced since 2003.

Given the situation in these countries, Israel recognises that forcibly deporting Eritreans and Sudanese to their states of origin would violate the international law principle of ‘non-refoulement’. Yet the state is also clearly determined to prevent them settling in Israel and has denied virtually all of them refugee status or a subsidiary form of protection. For example, while European Union countries recognise around 90% of Eritrean asylum seekers and a high proportion of Sudanese as beneficiaries of international protection, figures in 2015 suggest that Israel granted refugee status to just 0.07% from the two countries.

Instead, Israel gives Eritrean and Sudanese asylum seekers a choice: to leave “voluntarily” to a third state, or be deemed non-cooperative and therefore liable to indefinite detention. In the first three months of 2016, 955 Eritreans and 152 Sudanese chose the former option. In 2015, the figures were 2,480 and 600, respectively.

It is perhaps not surprising that relatively few Eritreans and Sudanese in Israel have opted to relocate. According to a 2015 report compiled by the International Refugee Rights Initiative (IRRI), those that have chosen this route have typically found themselves in Rwanda or Uganda without legal status and vulnerable to exploitation or trafficking.

Interviewees described how they were left without any legal documents or legal status on arrival, forcing them to live below the radar or leave the state. Indeed, many depart from Rwanda and Uganda shortly after arriving, often trying to make their way to Europe. Another report from December 2015 by the Israeli NGO Hotline for Refugees and Migrants revealed similar findings.

Furthermore, despite claims that these departures are “voluntary”, all the interviewees in the IRRI report said that they had left as a result of detention or the threat thereof, and because they felt they would not be able to acquire the legal status that would allow them to lead stable lives in Israel.

Citing a confidentiality document signed by Netanyahu and the third party states in March 2014, the Israeli government refuses to officially disclose the partner countries or specifics of the agreements, claiming that “revealing the identity of the States, their willingness to assist, and the details of the agreement may harm Israel’s foreign relations”.

This means any public scrutiny of the agreements is impossible. But it is speculated that in return for taking in Israel’s unwanted asylum-seekers, Uganda and Rwanda enjoy Israeli assistance in terms of the provision of weapons, military training, agricultural aid, and/or financial assistance.

In 2015, two Eritrean asylum seekers alongside six Israeli NGOs petitioned the Beer Sheva District court in Israel, challenging the legality of the secret agreements. Their petition was rejected in November and although the judgment did not name the countries, it referred to them as “state U” and “state R”.

This ruling was appealed, however, and is now pending before the Israeli High Court of Justice (HCJ), with a hearing set for early October. Meanwhile, a temporary injunction prevents the state from detaining Eritrean and Sudanese nationals who refuse to leave “voluntarily”.

When Netanyahu was asked about asylum seekers in Israel on his recent East African trip, he was keen to dismiss them as economic migrants and “young, healthy” job-seekers. But notably, neither the Israeli PM nor his Ugandan and Rwandan counterparts denied the existence of the transfer arrangements, and behind the scenes, the deal may well have been further discussed and cemented.

This means that the main hope for those who oppose the agreements rests with the High Court of Justice, which in October will consider whether the transfer agreements should be made public and face proper scrutiny – as in the case of Australia’s transfer agreement with Cambodia and the EU-Turkey ‘statement’ – and, fundamentally, whether they breach Israel’s domestic and international law obligations.

In previous judgements, the HCJ has thrice quashed legislation authorising the lengthy detention of “infiltrators”. But these rulings led to significant backlash against the court and calls to curb its constitutional review powers. Politically therefore, it may be risky for the court to block the transfer agreements and it is quite possible that rather than deciding the case, it will leave it pending, keeping the injunction preventing the state from detaining uncooperative Eritrean and Sudanese in place. If this were the case, the questionable transfers could continue.

Meanwhile, a solution for plight of Eritrean and Sudanese asylum seekers who face in Israel itself is nowhere in sight.

*African Arguments.Dr Ruvi Ziegler is Lecturer in Law at the University of Reading, Research Associate of the Refugee Studies Centre, Oxford, and a Researcher at the Israel Democracy Institute.