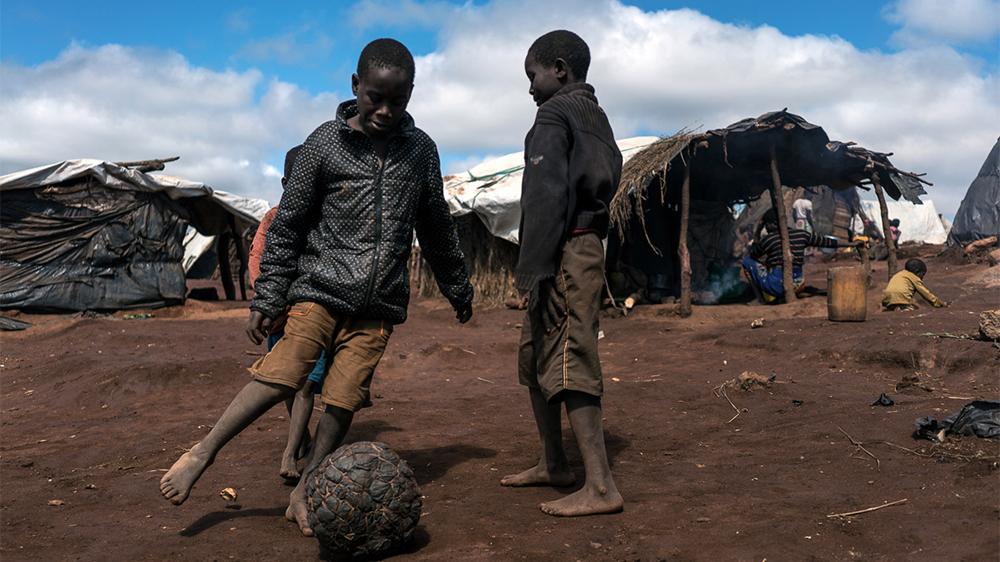 Mwanza, Malawi – It is a chilly morning in Kapise. The mist has lifted over the hills, deep in Malawi’s southwestern district of Mwanza. But this transit camp, which hosts thousands of Mozambican refugees, is still damp from the early morning dew.

Children kick a football across the dark, red earth, while their elders sit outside the makeshift homes, talking, feeding babies or grinding maize.

Since 2014, fighting between government soldiers and the Mozambican National Resistance (Renamo) in the Tete province and Gorongosa district of southern Mozambique has killed hundreds of people and pushed more than 12,000 into Malawi. Renamo, the rebel group that has morphed into a political party, alleges that their rival, Frelimo, rigged the October 2014 election. The dispute reignited fighting in several of the country’s districts.

Refugees and the local authorities say there have been arson attacks and mass shootings targeting civilians in the border regions. In March, the UN refugee agency, UNHCR, recorded 250 people crossing over to Kapise from Mozambique each day.

“We hid in the bushes for two weeks and it was hard. Now we are here, and we finally have a home,” says Loucy Bato, who is wearing an oversized yellow shirt and a colourful chitenge skirt as a young girl – one of her nine children – leans on her.

Loucy, who is in her early 30s, left Mozambique in January after her cousin and friend were shot dead when government forces attacked the town of Ndande in search of Renamo supporters. She escaped with her children and nothing more than the clothes on her back. After wandering around the bushes and forests of the border region, she found her way to the border village of Kapise.

Although the camp inside Malawi was safe, with so many new arrivals in February and March, it soon became a health and fire hazard. Whitney Ward, a field coordinator for Doctors Without Borders (MSF) in Kapise, said she had never seen such levels of overcrowding at a camp before. That prompted the organisation to declare minimal humanitarian standards as unachievable at the camp.

Ward said that conditions were so poor it was a surprise that there hadn’t been an outbreak of a contagious disease. But the camp’s clinic did record a surge in cases of malaria.

Loucy’s nine-month-old daughter was one of those killed by the disease.

‘It’s not safe at night’

Belinya’s house was razed to the ground by government forces. She says her husband disappeared during the chaos.

“I don’t think he is alive,” Belinya says matter-of-factly.

Like Loucy, Belinya says she is comfortable in Kapise because of its proximity to the border, which is only 5km away. She returns to her own country during the day, she says, to collect food from the farms but returns to the camp by nightfall. It is not safe to stay the night.

“The food supply here is erratic, and we go home to cultivate our fields,” she explains.

A patchwork of plastic tents

The camp in the village of Kapise is a patchwork of plastic tents. It looks largely deserted, although those who are there insist that other residents have just left for the day to cultivate their fields across the border or to work for locals inside the village.

But most of the 10,000 people who were previously in the camp are no longer living there, although it is unclear just how many remain. The UNHCR says that on its last count, on June 27, there were 747 refugees still living in Kapise. On July 13, Bestone Chisamile, Malawi’s principal secretary at the Ministry of Home Affairs, placed the number at less “than a thousand”. But an official in Malawi’s Ministry of Home Affairs, speaking on condition of anonymity, said on July 5 that there were closer to 3,000.

The Malawian authorities and the UNHCR decided in April to move the refugees living in Kapise to Luwani, a camp that was originally created for Mozambican refugees fleeing the civil war of 1977-1992. Located in the Neno district, some 70km from Kapise, that camp was officially closed in 2007, but it reopened in April to host the new arrivals. So far, some 1,800 refugees have been taken there.

The UNHCR said it had made the “difficult decision” to stop food supplies to the Kapise camp in June.

“It was a case of prioritising dwindling resources,” said Fadela Novak, a senior coordinator for the UNHCR in Luwani.

When Al Jazeera visited Kapise in mid-June, an MSF-run clinic had around 15 patients, some of whom were being treated for issues related to malnutrition. A district health official, assisting at the clinic and speaking on condition of anonymity, described the decision to stop food supplies as “not right … because people were still coming in”.

The situation is a complicated one for the Malawian authorities to navigate, said a source in Malawi’s government, who asked not to be named.

Officially, the Mozambican government refuses to acknowledge that it is facing a crisis on the border and the Malawian government does not want to be portrayed as hosting its neighbour’s opposition movement, he explained.

“The Malawian government has to assist but ensure it’s not seen to be taking sides with the opposition.”

According to the UNCHR’s statistical report for Luwani, released on June 27, 63 percent of those at Kapise were below the age of 18, while 61 percent of those who moved to Luwani are of a similar age, with a majority below 11.

Some of those who refused to leave Kapise, like Belinya, say that moving to Luwani would have given their refugee status a degree of semi-permanence, eroding the flexibility offered by being closer to the border. “I don’t want to become Malawian,” Belinya says, shaking her head as she draws a line in the sand.

Novak says that while she has no doubts that Luwani is safer, she understands the reservations of those who prefer to remain at Kapise.

Struggling to feed their own

In Luwani, giant baobab trees tower over the camp, which sits surrounded by hills. Hundreds of wooden framed structures capped with white plastic sheets dot the plains. There are three communal hangars, a medical post, emergency tents and sanitation facilities.

When refugees arrive from transit centres such as Kapise or from informal settlements in Chikwawa or Dedza, they are placed in a waiting area for a week. They are provided with food, blankets and kitchen utensils and undergo medical check-ups before being transferred to another area with wooden homes.

The shortage of food is a concern that reverberates across the camp, even if there is a general acknowledgement that it is safer here. Some at Luwani allege that food supplies run out before each month ends, and that food distribution is erratic. The UNHCR contends that it is a case of families mismanaging their rations.

Malawi is already host to 25,000 refugees from the Democratic Republic of Congo and Burundi in an overcrowded camp in Dzaleka, some 35km from the capital, Lilongwe. In October 2015, food rations there were reduced to 40 percent of what they had been.

Faced by a drought in the central and southern part of the country, Malawi is struggling to feed some six million of its own people. To be seen giving a foreign population resources while locals struggle to eat would be a disaster, explained the source familiar with the government’s refugee policy. Kapise’s village chief says that his community’s willingness to share land and water has come at a price as the drought makes it difficult to be generous with scarce resources.

‘Idle from sunrise to sunset’

Fifty-year-old Matias Zakeyo, and his wife Margaret Blakson, 44, sit on a straw mat outside their new home waiting for maize to boil over a rock and wood stove. A solar panel rests on a separate mat, charging a radio.

The sun is beginning to set and the family of eight appears relaxed.

Matias says he is happy that his children are now able to attend school in the camp. Back in Mozambique, they had pulled them out of school and sought refuge in the bushes of the border region after months of violence in their town of Zobue. For a year, they had wandered around in the bushes, sleeping between shrubs and trees and at the mercy of the open sky. They eventually made their way to Malawi.

“We want them to be educated, and to become teachers,” Margaret says of her children, laughing.

Matias says they brought their younger children with them but left the three older ones behind. “They can look after themselves,” he says.

While Matias and Margaret are grateful to be in a safer place, life here isn’t without its frustrations. “I am idle from sunrise to sunset,” Matias, who was a farmer of beans and maize in Mozambique, says. While he was able to find work in the fields of villagers in Kapise, here in the Luwani, the few empty spots in the camp are enmeshed by thick bush, and where it has been cleared, the soil is dry and lifeless.

Bernado Augustino complains of the same thing. He was also a farmer in Mozambique but was forced to flee when a gunfight erupted around his home. He says there were bodies along the path to Malawi.

He has mixed feelings about the camp – describing it as “safe”, but also “a regret”.

Wearing a blue sweater with smudges of black grease, Bernado looks exhausted as he fiddles with the plastic sheeting of his shelter. “They promised all types of things, but I think it was just a way to get us here,” he says.

‘A slave in another country’

The UNHCR says it is aware of the myriad concerns at Luwani, especially those related to food, but that it is still a safer option for the refugees.

Alexander Mabelle, the UNHCR’s site planner at Luwani, says they were clearing acres of thorny bush inside the camp to prepare the land for agricultural use.

But it is precisely these symbols of permanence that worry sisters Alinafe and Belinya Juwao, who prefer to brave the chilly nights and hunger in Kapise. They want to return home as soon as they are able to and are willing to live in transit if that increases the likelihood of that.

Joao Manwele also refuses to leave Kapise for Luwani. He may not be able to remember his age, but he recalls precisely how long it took him to build the house that was burned down earlier this year during the fighting: 30 days. He clutches his head as he reminisces. “The way I was living there, it wasn’t much. But I hate being a slave in another country,” he says.

For others, like Matias and Margaret, who have been refugees before, returning home seems unlikely for now. This is the third time that Matias has had to flee his country. For Margaret, it is the second.

“We listen to the radio every day,” Margaret says with a faint smile, “and there is still no mention of peace returning. This is why we are still here.”

Nigerian vice president says he has Buhari’s approval for everything 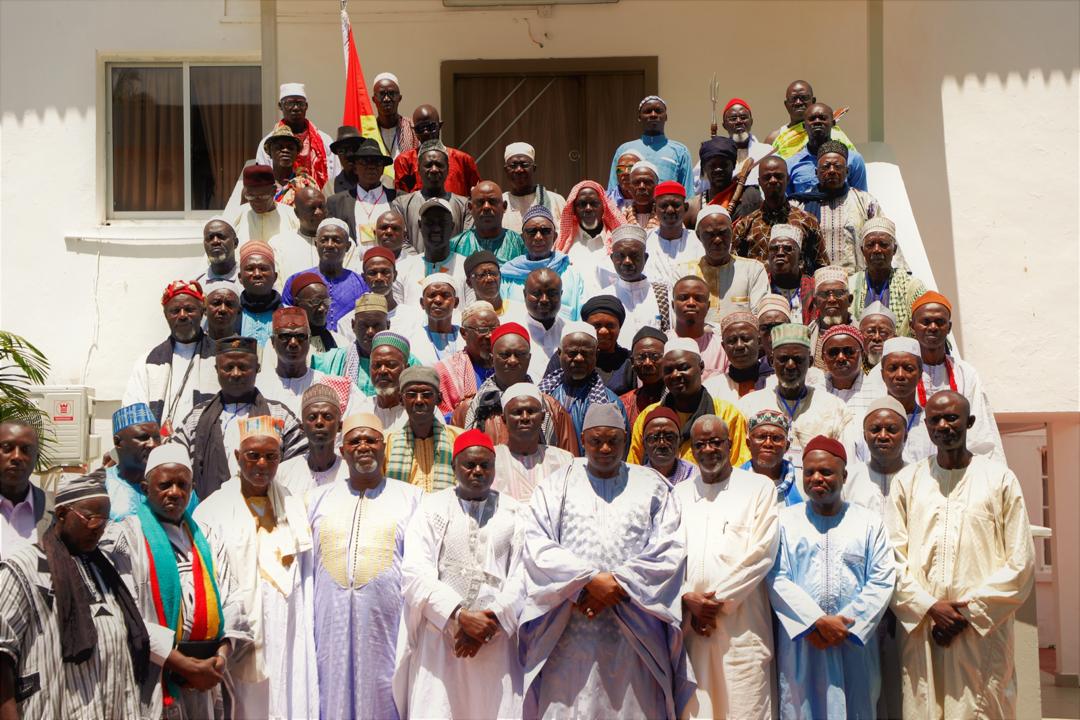 Bissau-Guinean Chiefs Call on Gambians value peace in the country