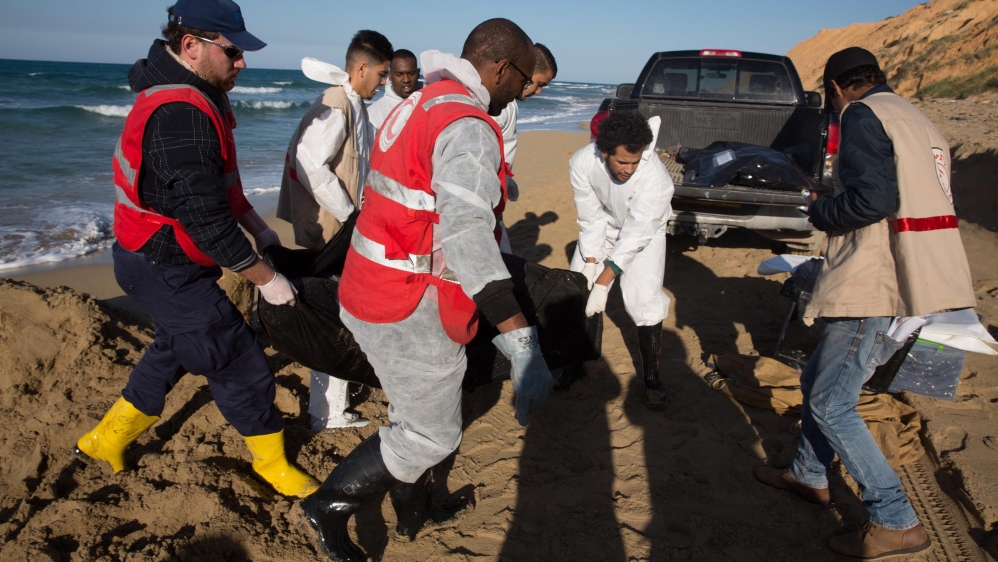 More than 120 bodies of people who died trying to cross the Mediterranean to Europe washed up around Sabratha city in western Libya in July, the city’s mayor said.

Hussein Thwadi said on Sunday that bodies had washed up on a daily basis during the month, with 53 found on a single day last week. The victims were mainly sub-Saharan Africans as well as 23 Tunisians, he said.

Red Crescent volunteers and local officials have been removing the bodies for burial in a cemetery in Sabratha for unidentified remains.

“The whole coast of Sabratha is open,” Thwadi told the Reuters news agency by phone. “There are patrols but they do not have enough capacity to tackle this crisis.”

“Illegal migration existed before, but with insecurity and the lack of state authorities the crisis has become worse and worse.”

Libya is a common departure point for migrants seeking to travel to Europe by boat, many of them fleeing violence, repression or poverty in sub-Saharan Africa.

Political turmoil and armed conflict in Libya has given human smugglers the space to work with impunity, running trafficking networks that bring migrants across the Sahara desert to the coast and on to rickety boats that attempt to cross the Mediterranean.

Of more than 3,000 migrants known to have died trying to cross the Mediterranean so far this year, about three out of four perished trying to reach Italy from North Africa, mainly Libya, according to the International Organisation for Migration (IOM).

Nearly 90,000 migrants had crossed the central Mediterranean to Italy as of this week, the IOM said, a 14 percent increase on last year.

As the number of attempted crossings from Libya picked up with the arrival of calmer weather in the spring, many boats have been leaving from the coastline near Sabratha.

A UN-backed government that has been trying to establish itself in Tripoli since March says tackling migration is among its priorities. But the government is struggling to manage complex security and economic challenges, and still faces political opposition on the ground.

Thwadi said he has raised the issue with the new government’s leadership, but had not yet received a concrete response.