Hosting an African or diaspora themed event in Washington, DC, and need someone to create a feel good moment with your audience to set the right tempo? Well, Kenyan born poet,author, and singer Anna Mwalagho may be the person you need.

From the launching of the African House which hosts the African Union in Washington, DC, to a meeting of the African diaspora at the White House, and a forum of the Democratic National Committee, Anna Mwalagho has carved a veritable niche for herself with her brand of poetry.

Her sketches will make you feel good in affirming your African heritage, there will remind you of the amazing leadership role women play in the continent, or jolt your conscience on the very surmountable challenges that the continent faces. Far from just jokes, Anna’s sketches are a blend of education, information, tales of courage, resilience ,African self believe, and entertainment woven into one.

With her growing fame, Anna remains firmly grounded and conscious of her origins. In a recent interview, Anna said it has been a bumpy ride working her way to the top. Whereas she had already built quite a big following and name for herself in Kenya, Anna toiled hard to make the same name when she moved to the USA and her resilience eventually paid off.

The cultural shock she went through, and which is identifiable with most other African immigrants is sometimes turned into humorous sketches .In addition to the poetic work, Anna is also into music and plays with her own band. With the band dubbed as Afrofloetry, Anna has shared the scene with African music legends like Hugh Masekela and Oliver Mtukudzi from Zimbabwe. 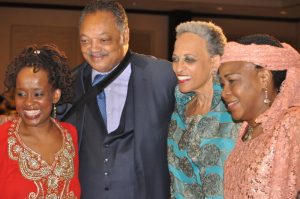 Africa could benefit more with stronger support and participation of its diaspora, Anna said. Caught in the political excitement created by Hillary Clinton’s giant strides towards becoming the first female elected President of the USA, Anna Mwalagho said the world must be reminded that African women are all leaders with all they go through to serve as the source of livelihood for their families.

Did the world fail Ebola orphans in Sierra Leone?